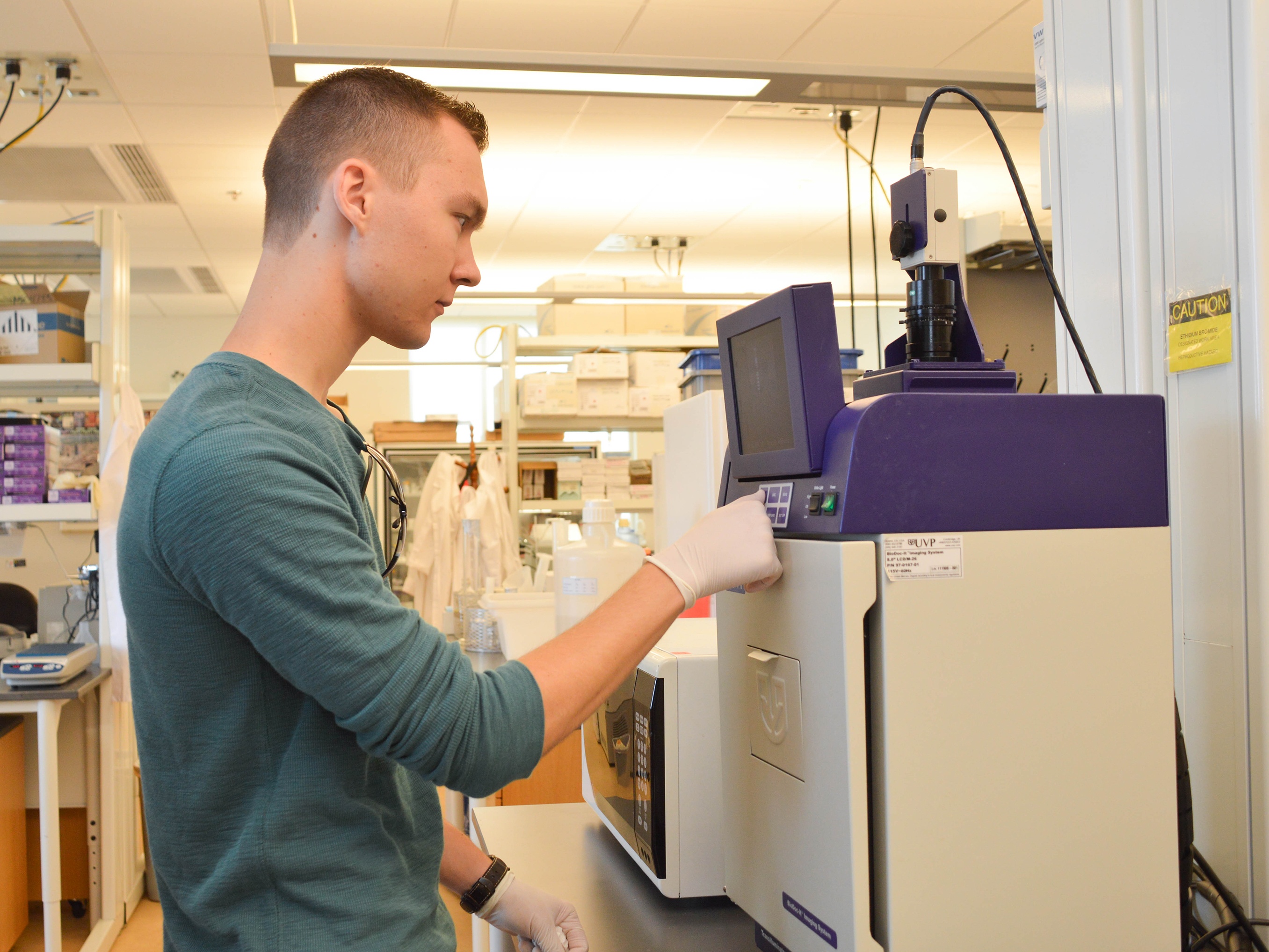 OMRF board member John Saxon, M.D., of Muskogee established the program in 2009 to honor his late father, who was a West Point graduate, career Air Force pilot and taught at the U.S. Air Force Academy. With Saxon’s support, OMRF now provides a select group of military academy students with an opportunity to gain hands-on research experience with senior scientists at the Oklahoma City-based nonprofit.

This summer, two midshipmen from the U.S. Naval Academy in Annapolis, Md., and one cadet from the U.S. Air Force Academy in Colorado Springs, Co., traveled to Oklahoma City to work on projects in OMRF laboratories.

“I think the team mentality was the most pleasant surprise about working at OMRF,” said Thomas Hentges of Boise, Idaho, a chemistry major at the Naval Academy. “All the staff seemed to genuinely care about one another and always took opportunities to help with anything their coworker might need. Advice and wisdom was always freely shared, and it seemed like an incredibly positive work environment.”

Hentges worked with Rodger McEver, M.D., in OMRF’s Cardiovascular Biology Research Program where he focused on gaining a better understanding of the mechanisms by which the body is able to resolve injury and infection. Through genetic mutation of a critical protein involved in directing white blood cells to an affected area, he sought to understand the link between a white blood cell’s ability to stick to the region of interest and the physical skeletal structure of the cell.

For George Peng, also a chemistry major at the Naval Academy, the summer was spent looking for possible relationships between diabetes and heart dysfunction. Working with Kenneth Humphries, Ph.D., in the Aging and Metabolism Research Program, Peng investigated whether a high-fat diet changes the concentration of certain biologically important proteins in the hearts of lab mice.

“The best part was working in a real research laboratory,” said Peng, a Severn, Md., native. “While I’ve always found lab classes at school interesting, it is very rewarding to participate in actual scientific research and contribute to discoveries that make a difference. A lot of what I’ve done for the past month wasn’t covered in-depth in school and this experience has pushed me to learn many new things.”

Pahissa, who worked with Courtney Griffin, Ph.D., also in OMRF’s Cardiovascular Biology group, said the program helped to propel his career goals forward, as he has his sights set on becoming a physician in the U.S. Air Force.

“It is a profession which allows me to serve others while allowing me to interact with people on a personal level using knowledge I will have gained,” he said. “OMRF was a great place to spend five weeks furthering that knowledge.”

Saxon, an OMRF board member since 2000, launched the program with an initial gift of $250,000. Saxon’s hope is that the laboratory exposure helps to expand the students’ knowledge base and strengthen the scientific abilities needed to aid our country in combating threats like bioterrorism.

“John Saxon’s dream of honoring his father and enriching the careers of young military students continues to be a great success for all involved,” said OMRF President Stephen Prescott, M.D. “It’s our pleasure to have these students work with us each summer and a great opportunity to offer them research training that will benefit them during their military service and thereafter.”