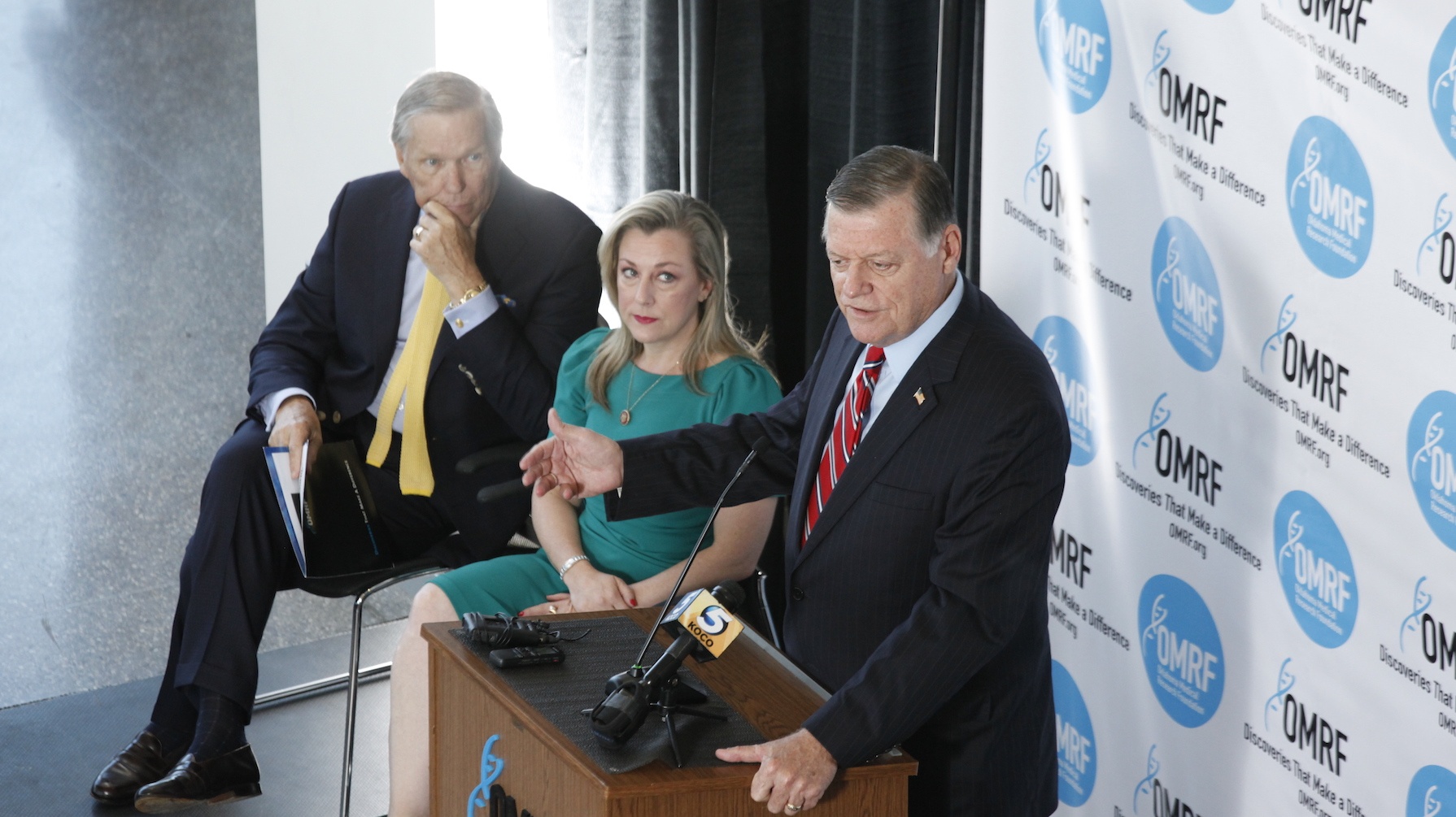 Congressman Tom Cole (R-OK) joined leaders from OMRF today to announce two major federal grants totaling as much as $48 million to OMRF. The National Institutes of Health awarded the grants, which will fund research on autoimmune diseases and human exposure to anthrax.

“The new grants are the product of a robust partnership between the federal government and Oklahoma’s biomedical research community,” said OMRF President Stephen Prescott, M.D.

“Thanks to the leadership of Congressman Cole on the House Appropriations Subcommittee on Labor, Health and Human Services, Education, and Related Agencies that oversees funding for the Department of Health and Human Services, the National Institutes of Health’s budget has grown almost $8 billion over the past five years,” said Prescott. “He’s been a champion for medical research, and those efforts are paying dividends in the form of new grants, a boost for our state’s economy, and advances in treatments for Oklahoma’s patients.”

Each grant will cover a five-year period. The funding will support laboratory projects as well as clinical studies to help Oklahomans suffering from conditions such as multiple sclerosis and lupus.

“I am proud to congratulate these impressive Oklahoma based researchers who set themselves apart in nationwide competitions,” said Cole, who serves as Ranking Member of the House Appropriations Subcommittee on Labor, Health and Human Services, Education, and Related Agencies. “The grant funding awarded will not only open doors to new treatments for Oklahoma patients, but the projects will also deliver significant economic benefits by creating and supporting jobs in the research sector and helping identify future biotechnology opportunities in our state.”

Projects will focus on improving understanding of and treatments for autoimmune diseases, conditions in which the body’s proteins or cells attack its own tissues. Autoimmune illnesses include lupus, rheumatoid arthritis, multiple sclerosis and scores of other illnesses; in total, they affect an estimated 1 in 12 Americans.

OMRF treats more than 3,000 patients suffering from multiple sclerosis, lupus and other autoimmune disorders, and the foundation’s physicians will conduct several clinical trials as part of the grant. One of those trials will be the first of its kind in the U.S. to focus on preventing rheumatoid arthritis. Other trials will provide new treatment options for patients with multiple sclerosis and lupus, as well as rarer diseases.

“We’re looking for ways to repurpose old drugs to treat autoimmune diseases and improve patients’ lives,” said James, who serves as Vice President of Clinical Affairs and holds the Lou C. Kerr Endowed Chair in Biomedical Research at OMRF. “These studies will allow us to understand how medications do or don’t treat patients’ symptoms and to identify subgroups of patients who have the highest likelihood of responding to a given medication.”

In the second grant, OMRF researchers led by Mark Coggeshall, Ph.D., will receive $12 million to continue investigations on anthrax and the bacteria’s effects on humans.

Since 2004, Coggeshall and his colleagues have studied the human immune response to anthrax bacteria as part of NIH’s Cooperative Centers for Human Immunology with the long-term goal of identifying new vaccines and drug targets. The original funding came as a result of the anthrax-laced letters that killed 5 and sickened 17 on the heels of the terrorist attacks of Sept. 11, 2001.

Already, OMRF scientists have identified the part of anthrax that initiates the body’s reaction to the bacteria, how it is recognized by the immune system, and how it causes damage. With this new funding, researchers will begin testing therapies that could help treat those who’ve been exposed to anthrax and other pathogens.

“Inhalation anthrax is a dangerous disease with features similar to severe staph and strep infections,” said Coggeshall, who holds the Robert S. Kerr, Jr., Endowed Chair in Cancer Research. “What we’ve learned in the past 15 years studying anthrax also applies to these other bacterial infections.”

Funding for the research is provided by grant numbers 1UM1AI144292-01 and 2U19AI062629-16 from the National Institute of Allergy and Infectious Diseases, a part of the NIH.