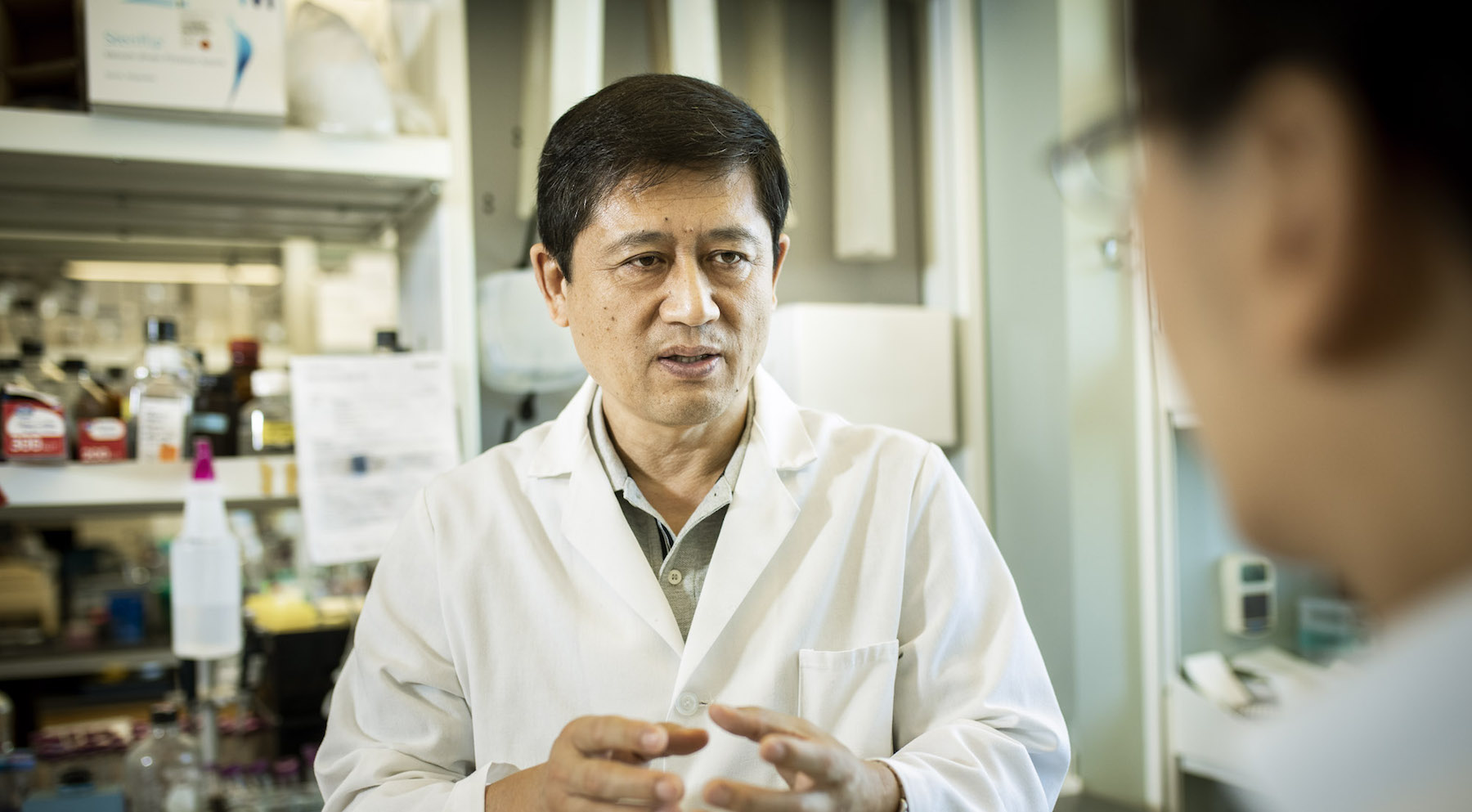 The human gut is home to microorganisms that outnumber our cells by a factor of 10 to 1. Now, discoveries by scientists at the Oklahoma Medical Research Foundation have redefined how the so-called gut microbiome operates and how our bodies coexist with some of the 100 trillion bacteria that make it up.

The new findings appear in the journal Science and could lead to new therapies for inflammatory bowel disease and people who’ve had portions of their bowels removed due to conditions like colon cancer and ulcerative colitis. They also help explain why the use of antibiotics can create a multitude of problems in the digestive system.

Using research models, OMRF’s Lijun Xia, M.D., Ph.D., led a team of scientists who found the microbiome controls the creation of a sticky layer of special forms of sugar-enriched mucus that encapsulates and travels with fecal matter. The mucus — which the researchers showed not to be static as previously thought — acts as a barrier between bacteria in feces and the thousands of immune cells in the colon. Without the mucus, the whole system gets thrown out of balance.

“The colon is not just a digestive organ, but an immune organ,” said Xia, who holds the Merrick Foundation Chair in Biomedical Research at OMRF. “Our microbiome begins to develop at the moment of birth and evolves throughout our lives. It’s essential for the growth and maturation of the acquired immune system in our body. When it’s not well developed or cared for, it doesn’t operate as it should, which can lead to diseases.”

The overall health of the gut microbiome is dependent on the presence of its mucus. And although mucus production can be interrupted, OMRF researchers showed that it can be restored.

In the study, the researchers found that the fecal matter of mice treated with a broad-spectrum antibiotic had no trace of the mucus coating. And when mice without this protective barrier received a transplant of fecal matter with microbiome, their mucus production jump-started.

This may have significant treatment implications for patients whose microbiome is out of balance, Xia explained.

“Whether because of antibiotics interrupting mucus production or a total colon removal due to ulcerative colitis, painful inflammation can result,” said Xia. “Now that we better understand the role and origin of this mucus, we will study how we can supplement it or restore its production.”

OMRF President Stephen Prescott, M.D., noted that the gut microbiome has taken on increasing importance in medical research as scientists have recognized the roles its microorganisms play in our overall health.

“Researchers have found these tiny organisms living in our digestive tracts may be key players in obesity, diabetes and a variety of autoimmune and digestive diseases. Dr. Xia’s work proves a strong connection between the protective coating driven by the microbiome and the development of a disease like colitis,” said Prescott.

The findings may open the door to alternatives to colonoscopies for monitoring conditions like inflammatory bowel disease. “Rather than repeated invasive procedures to track the progression of IBD, we may be able to measure the presence of the mucus in a fecal sample and assess a patient’s gut health,” Xia said.

The ramifications of this research are far-reaching and reinforce the importance of “basic” science, Prescott added.

“Our researchers had to understand the origin and function of this mucus and how it relates to the microbiome to learn how it connects with disease. We now understand that the long-term health implications when this pair gets out of balance can be devastating, and Dr. Xia’s work can guide us to answers,” Prescott said.

This research was funded by National Institutes of Health grant nos. R01DK085691 and GM103441, as well as the Oklahoma Center for Adult Stem Cell Research, a program of TSET, and the Stephenson Cancer Center.