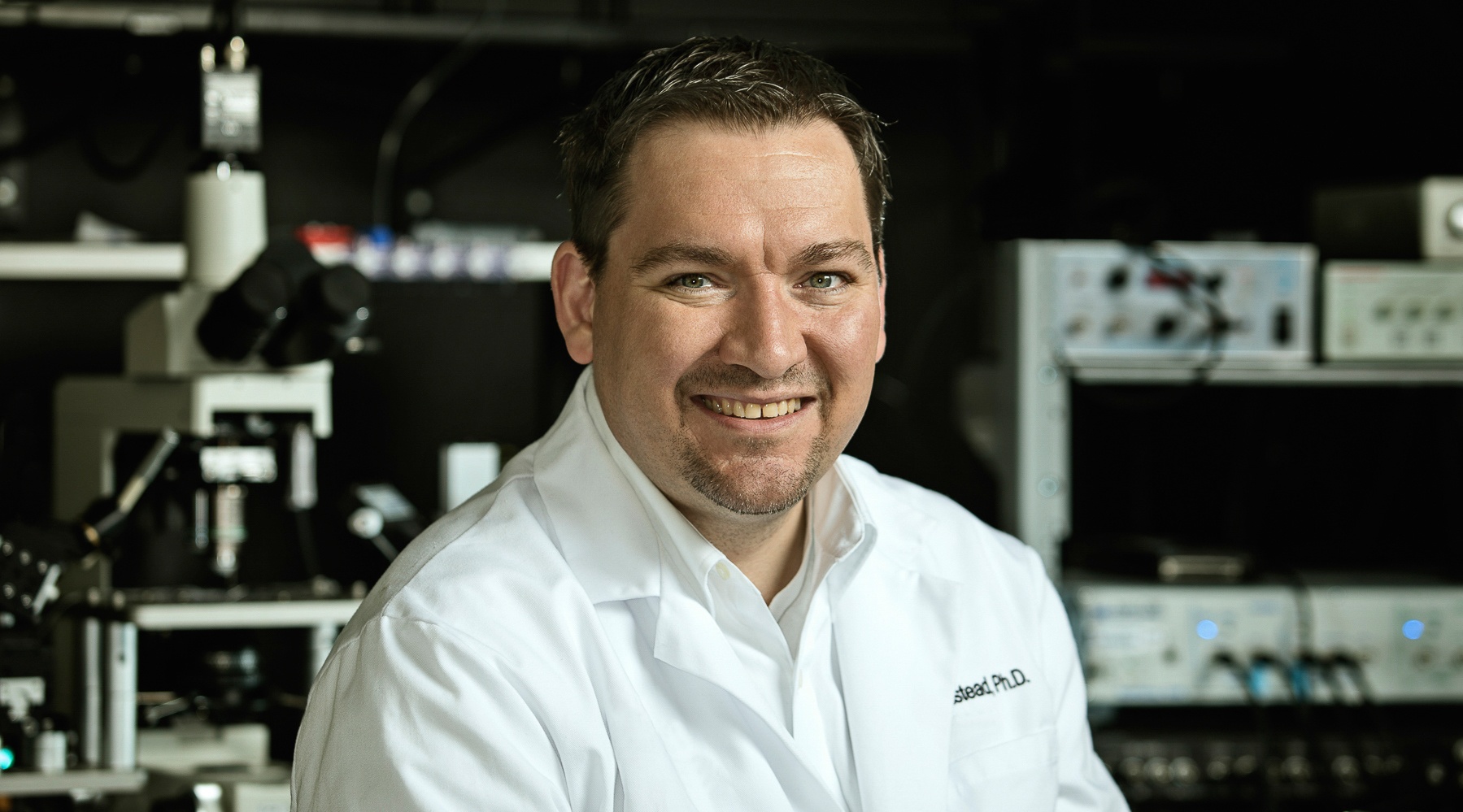 Near the base of our brains resides a small group of cells that plays an outsized role in our survival.

These cells are neurons that release dopamine, a chemical responsible for voluntary movement and the perception of rewards in the brain. OMRF’s newest scientist, Michael Beckstead, Ph.D., is focusing his research on what happens when things go wrong with dopamine neurons, resulting in problems ranging from Parkinson’s disease (too little dopamine) to addiction (too much).

Beckstead joined the Oklahoma City nonprofit from the University of Texas Health Science Center at San Antonio, where he first opened a lab to study the production and control of dopamine. Neurons in the brain release the chemical to initiate movement and also as a reward to reinforce certain helpful behaviors.

“It’s vital in learning behaviors that keep us alive. It’s why the things you need for survival feel good,” said Beckstead. “Eating when you’re hungry, drinking when thirsty, sex, a good night’s sleep.”

So, when the body slows or stops its dopamine production, the results can be devastating.

“If you lose dopamine, you can’t move because that signal can no longer be sent from your brain to initiate movement,” said Beckstead. “We know one of the main pathologies of Parkinson’s disease is the death of these dopamine neurons.”

Parkinson’s is a condition that leads to shaking, stiffness and difficulty with walking, balance and coordination. There is no known cure for the disease, which typically strikes after the age of 60 and worsens as sufferers grow older.

In his lab at OMRF, Beckstead is studying how neurons in the brain age. This work could lead to potential treatment options in the earliest disease stages of Parkinson’s, before symptoms become debilitating.

Meanwhile, he is also researching the role that dopamine plays in the addiction to drugs such as methamphetamine and cocaine.

“One thing we know about pretty much every drug of abuse is it causes a spike of dopamine in the brain,” Beckstead said. “When you eat a meal, you get an appropriate release of the chemical for satisfaction. But if you take methamphetamine for the first time, that spike is going to be much higher.”

With repetition, the brain comes to expect that unnatural release of dopamine. But when a person attempts to stop using, the body reacts negatively, thinking it needs the dopamine-triggering drug.

“This is why people who take meth spend all their money on the drug, steal from loved ones and commit violent acts; their brains are telling them they need that dopamine rush more than anything,” said Beckstead. “Now the addiction has taken the place of natural ‘feel-good rewards’ that come from having a good home, stable job or loving family.”

By better understanding the precise role that dopamine plays in drug addiction, his ultimate goal is to find methods to treat these disorders.

“In Oklahoma and across the country, drug addiction is a problem that’s reaching epic proportions,” said Beckstead. “If we can develop new strategies for intervention, that would be an important step forward.”