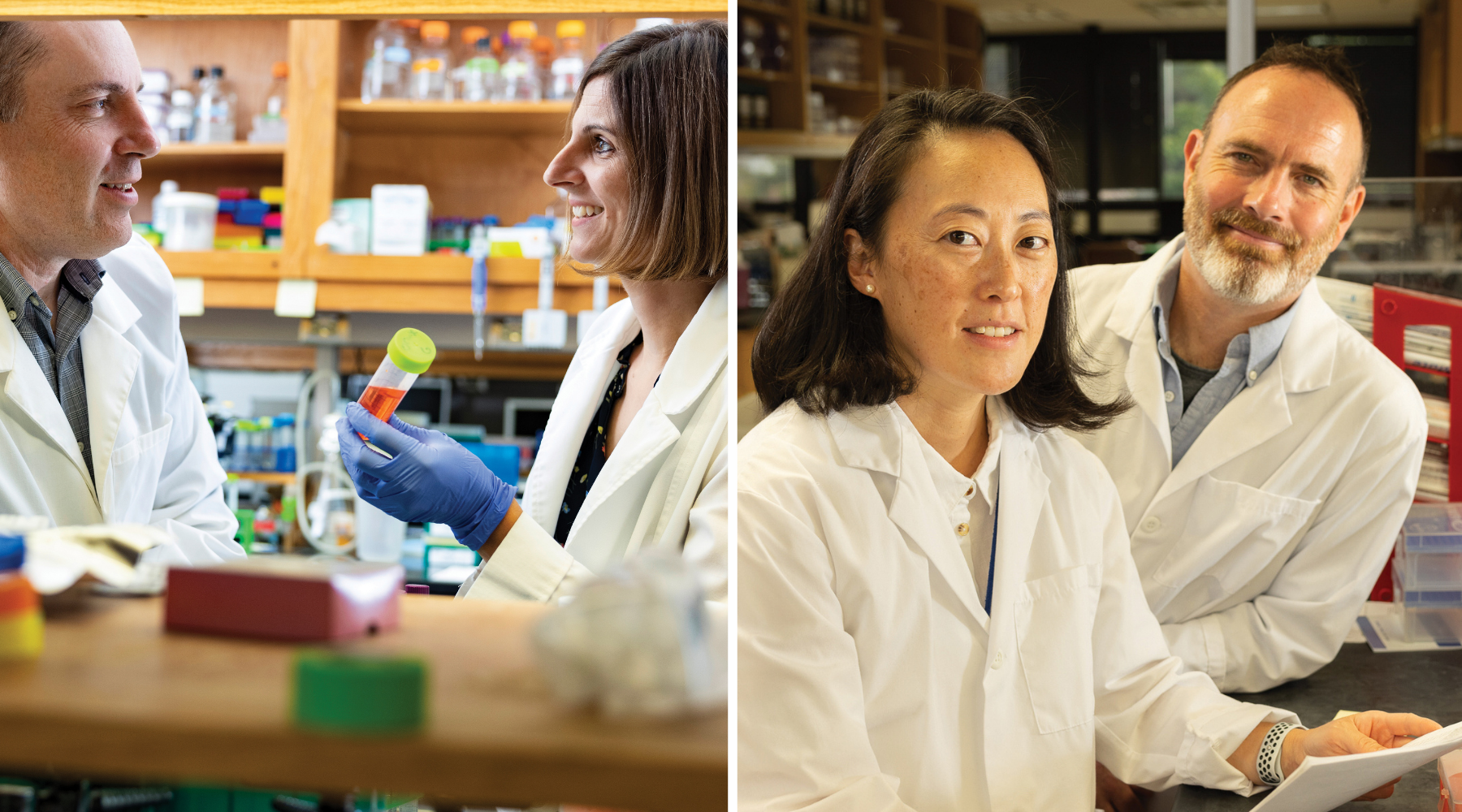 As with countless other working couples, OMRF scientists Drs. Chris and Courtney Sansam typically discuss their day at the dinner table. Never mind that they spent that day separated by only a few feet and one interior wall.

Sweethearts since grad school at Vanderbilt University, the Sansams married in 2003. After completing their postdoctoral studies in Boston, they arrived at OMRF together: Chris as a principal investigator and Courtney as manager of his new lab.

In their lab, the Sansams study the genes, molecules and mechanisms needed to replicate DNA and how errors in this process contribute to cancer and other diseases. Their typical dinner conversation frequently revolves around the day’s experiments and revelations, sometimes to their 13-year-old son Mitchell’s chagrin. “He tells us we’re always talking about work,” Courtney says.

With complementary training and a focus on similar segments of cancer biology, the Sansams’ decision to join forces rather than open separate labs was met with mixed reviews from Chris’ faculty advisors at the Massachusetts Institute of Technology. “One said, ‘That’s so wonderful. You’ll make discoveries together.’ The other said, ‘That’s a terrible idea. You’ll get a divorce,’” Chris remembers.

The Sansams are among roughly 30 married couples at OMRF. Together, they comprise more than 10% of the foundation’s workforce, and in most cases, they work as a team in the same lab.

This phenomenon isn’t unique to OMRF, nor is it new. More than a century has passed since the marriage of Marie and Pierre Curie, physicists and scientific collaborators who discovered the radioactive elements radium and polonium. They were the first married couple to win a joint Nobel Prize, and four others – including their daughter and son-in-law – have done it since.

In 2008, a Stanford University study of 9,000 faculty members at more than a dozen universities found 36% to be part of an academic couple, with 38% of those working in the same department as their partner. The numbers were even higher among scientists: Of those in relationships, 83% of women and 54% of men had a fellow scientist as a significant other.

OMRF staff scientist Dr. Rose Ko, half of another scientific couple, sees work-life balance as a key reason researchers choose one another as partners in life.

“There’s no guilt involved when work calls,” says Ko, who has been married to OMRF’s Dr. Bob Axtell since 2008. “It’s like, ‘I know we said we’re going to do a movie, but I’ve got this lab result I need to go check out.’ Another scientist is going to say, ‘I totally understand.’”

Axtell and Ko work in tandem, and their research centers around multiple sclerosis. Axtell says Ko, whose responsibilities range from conducting complex experiments to sharp-eyed editing of his writing for scientific papers and federal grants, is critical to their lab’s success. “She’s really, really good.”

The pressure of science might follow them home, the couple agrees, if it weren’t for their 4-year-old sons, John and Oliver. “Having twins kind of makes it simple,” says Axtell. “At home, we’re focused on our guys’ needs – and that they’re not, you know, injuring themselves.”

The Sansams, with their son’s toddler years long past, say there’s no compartmentalizing work and home. “I ask science questions all the time,” says Chris. The couple jokes that despite collaborating for the last decade, they’re still making up for lost time. With rigorous schedules during their graduate studies in Nashville and the postdoctoral years at different institutions, “We never saw each other,” says Courtney. Plus, being on the same team as her spouse has bolstered their ability to recruit graduate students and postdoctoral researchers to the lab: junior scientists, she says, see the duo as “like getting two mentors.”

Most importantly, Courtney says, their partnership creates a deep, personal commitment to their science. “If you have to come back to the lab late at night, or if I’m working on weekends, I feel good knowing I’m going in and making a difference for our lab, not doing an experiment for somebody else.”