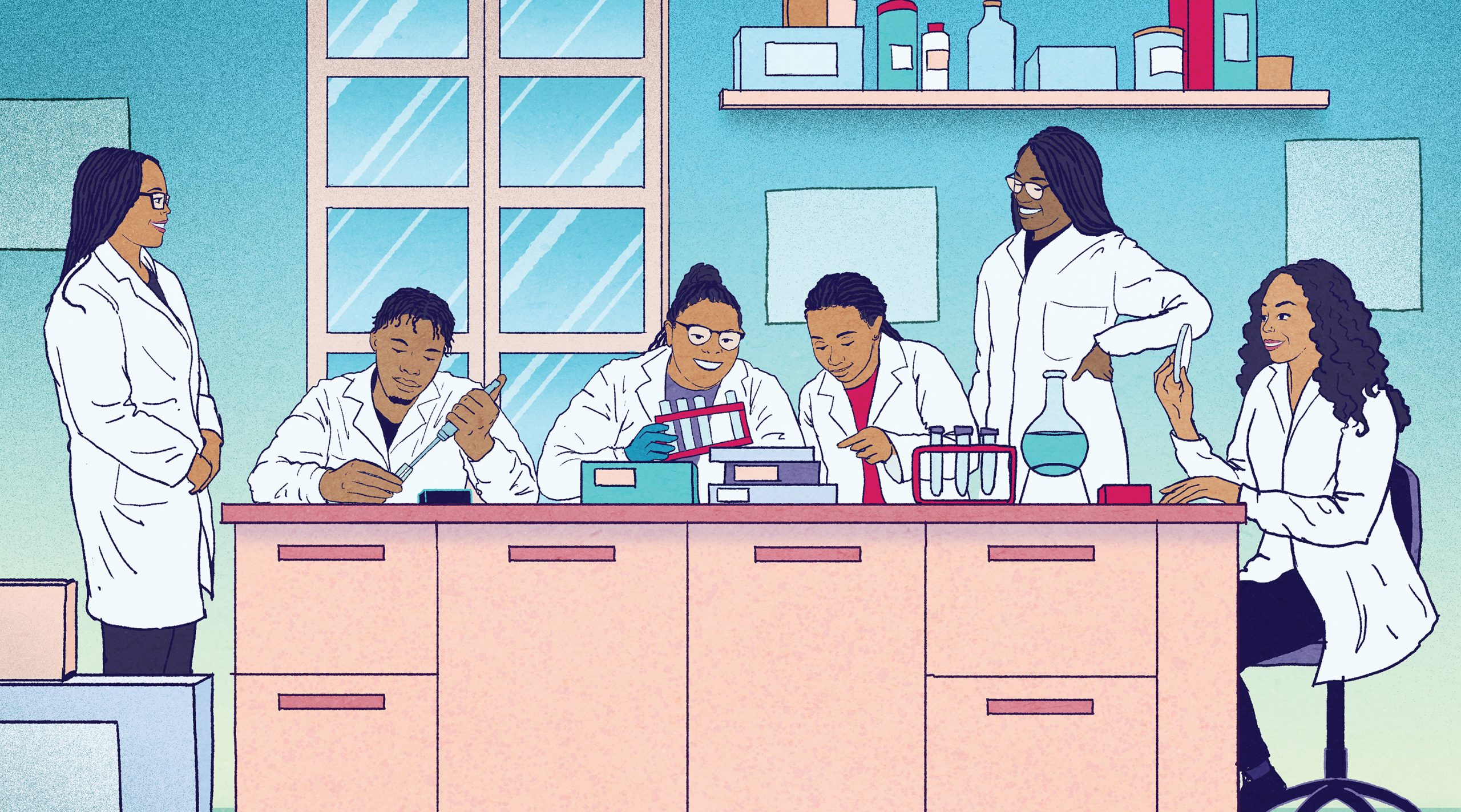 OMRF’s partnership with Langston University, the state’s only historically Black college or university, aims to prepare underrepresented students for careers in biomedical research.

Of the thousands of questions researchers posed at OMRF in 2020, one took an unusually public stage. Amid the surge of attention on racism in the U.S., scientists across the country and at OMRF placed their labs under the microscope.

“It got a lot of us thinking about how we didn’t have a lot of Black scientists or other underrepresented groups at the faculty level, and why was that?” says Dr. Susan Kovats, an immunologist who’d led a lab at the foundation since 2005. In the conversations that followed, researchers wondered whether the underrepresentation was direct discrimination, an absence of opportunity, lack of outreach, a combination of those factors, or something else entirely. And apart from the root cause, says Kovats, a second question followed: “What can we do to fill the pipeline?”

In a June 2020 editorial that appeared in The Oklahoman newspaper, the late Dr. Stephen Prescott, then OMRF’s president, addressed the lack of diversity in high-level scientific roles head-on. “Above all else, science relies on facts and data,” Prescott wrote. “When it comes to bringing minorities into our ranks, those facts and data are clear: We’re failing.”

The commentary prompted Kovats to reach out. If OMRF was going to do something about the issue, she told Prescott in an email, she wanted to help. “He wrote back and said, ‘Would you like to chair the committee?’”

In an independent research institute like OMRF, the principal investigators, or PIs, are its faculty. They are the leaders of the foundation’s individual laboratories, senior researchers who chart the organization’s scientific course. OMRF has more than 50 PIs.

“In the sciences, principal investigators set the tone for an institution,” says Dr. Andrew Weyrich, OMRF’s president and a principal investigator at the University of Utah for more than 25 years. “They not only direct the research, but they inform its culture. They also train the next generation of scientists.”

The first step to becoming a PI is to earn a bachelor’s degree, usually in the biological sciences. The NSF survey found that only about a quarter of undergraduate science and engineering degrees were earned by underrepresented minorities, which the NSF defines as Black or African American, Hispanic or Latino, and Native American or Alaska Native people.

The next stop is graduate school for a doctorate. For doctoral degrees among the same groups, the number shrank to 16%. And while both figures are up significantly over the last two decades, representation lags the country’s general population. According to the U.S. Census Bureau’s latest statistics, these groups now make up more than 1 in 3 Americans.

A multi-year postdoctoral fellowship follows, the equivalent of a clinical residency for physicians. A study released this year found that for those scientists who finished their fellowships after 2013, only 30% had become PIs five years later.

The numbers are particularly stark when it comes to Black scientists and biomedical research. Fewer than 2% of PIs receiving research project grants from the National Institutes of Health are Black.

OMRF is not homogeneous. A third of the foundation’s employees identify as people of color, and staff hail from close to 40 countries. Still, in the foundation’s more than three-quarter-century history, and especially at its highest levels, researchers from underrepresented groups are notably absent.

This reality is not unique to OMRF. Universities and research institutes across the U.S. are confronting it. And with good reason: Time and again, research has shown that diverse teams outperform uniform groups when it comes to problem-solving and innovation. And in science, different approaches yield different results.

In the summer of 2020, with backing from Prescott and other OMRF administrators, Kovats led the creation of a new outreach committee at OMRF. The group’s first meetings, says Kovats, involved “a lot of brainstorming.” Members discussed how the foundation might reach historically underrepresented groups in science, ranging from Black and Native American to Hispanic and Latino students. They considered field trips, hands-on programming for elementary and secondary schools, and summer internships for college students in the model of the foundation’s longtime Fleming Scholar program.

Dr. Valerie Lewis, a postdoctoral researcher studying autoimmune illnesses like lupus and Sjögren’s disease, served on the committee. Before she chose a career in science, though, she worked in the career placement office at Langston University, Oklahoma’s only historically Black college or university. She knew the school had an impressive science program, top-notch students who came to the state from around the U.S., and a faculty with research partnerships with federal agencies like NASA.

“Langston sends their students throughout the country to do research during the summer,” says Lewis. She wondered aloud whether OMRF, just 40 minutes from Langston’s campus, might be a destination for some of them. “OMRF is an amazing environment with amazing scientists, and students are leaving the state to do research? It was insanity to me.”

“We see a lot of our top students apply to out-of-state internships,” he explained. Once they spend a summer at Stanford or Yale, he said, they almost always end up leaving Oklahoma upon graduation. “It would be nice to keep some of the students here.”

In the months that followed, leaders from the two institutions put their heads together to create a new program. It’s one they hope will spur change, both for Langston students and OMRF.

Ask Trejon James about his first impression of OMRF, and he laughs. “I just remember thinking, ‘Dang, this building is huge.’” And then, “‘You can tell a lot of important things go on here.’”

The 19-year-old biology major from Topeka, Kansas, had just wrapped his freshman year at LU. In summer 2021, he and five other students arrived at the foundation and made up the inaugural class of the OMRF-Langston Biomedical Research Scholars Program.

For eight weeks, James worked under the mentorship of OMRF’s Dr. Tim Griffin. With Griffin’s guidance, he studied how osteoarthritis gets a foothold in the body and investigated strategies to better treat people living with the painful condition.

James enrolled at Langston as an honors student with a full scholarship, his sights set on pharmacy school. He’s loved science since he was a child and cites a sixth-grade experience as the spark that ignited an interest in biology in particular. “We dissected a cow heart,” James says. “It was my first chance to actually get in the lab.”

After spending his first year of college learning via Zoom due to the Covid-19 pandemic, James was eager to be around people and to “see what the field of biology had to offer.” In Griffin’s lab, he embraced a steep learning curve.

“It was a lot of newness for me,” says James. “Working in the lab, the scientific terms, the machines, the tools. And I’d never worked with mice. It was pretty fun.”

The two-month paid internship opened James’ eyes to lab life. In a traditional summer program, the experience would have ended there. But with the new program, OMRF and Langston took a different approach. “We wanted to create something more meaningful and long-lasting,” says Langston’s Quinn.

“The point is to grow and develop these kids,” says OMRF’s Lewis. Rather than sending them on their way after a brief experience, “we want to guide them on the path of science.”

After the summer, students could elect to continue their OMRF research over the school year. Some work could take place in Langston’s Science Research Institute; other projects would continue at OMRF. And the following summer, students could return for another eight weeks. Ultimately, their research projects and mentorships could extend throughout their undergraduate careers. If the students elected to apply to graduate school, their mentors could help guide them through the process.

Down the road, some students might do graduate or postdoctoral work at OMRF. One day, one might even become a PI at OMRF.

“This is the only program like this that I know of in STEM,” says Quinn. “It is a true collaboration that can create real research and real opportunities.”

Like most experiments, this one looked great on paper. But after the first summer, the institutions realized their approach needed a bit of tweaking.

When school resumed, James was eager to return to OMRF to continue his research. But with a full load of classes, plus GPA and volunteer hour requirements to retain his scholarship, finding time to devote to OMRF proved difficult. Several other students from the inaugural class were working part- or full-time jobs while in school, sometimes with overnight shifts, leaving no time for outside research.

“We have to balance all these pieces,” says Quinn.

OMRF’s Kovats, along with colleague Dr. Susannah Rankin and Quinn, have applied for an NSF grant to support that balance. The trio believes a key ingredient will be Lewis and fellow OMRF scientist Dr. Chris Schafer, who will work onsite at Langston part time as a bridge between OMRF mentors and students, providing hands-on training and guidance in the lab. They also want to reduce the financial pressure on Langston students by paying them a stipend to conduct research during the academic year, eliminating the need for outside employment.

As the scientists await a decision on the grant application, the second class of Langston Scholars has now completed a summer at OMRF. James returned for a second internship, and eight other students joined him as first-time program participants.

Aijalon Underwood, a 22-year-old chemistry major from Mansfield, Texas, was one. She spent her summer in Dr. Jake Kirkland’s lab working to understand why alterations in certain genes drive cancer.

Now entering her senior year, she’d planned on a job at Walmart this fall to help pay for school and expenses. Instead, she’ll be working in Kirkland’s lab.

Until the summer, she says, she told anyone who asked that she was going into forensic science. “It was just easy for people to understand, even though I wasn’t sure.”

But after two months at OMRF, she says, a new career goal has come into focus: “Biomedical research.” Grad school is in her sights, and she needs the lab experience as she sets out for her Ph.D.

Read more from the Summer/Fall 2022 issue of Findings