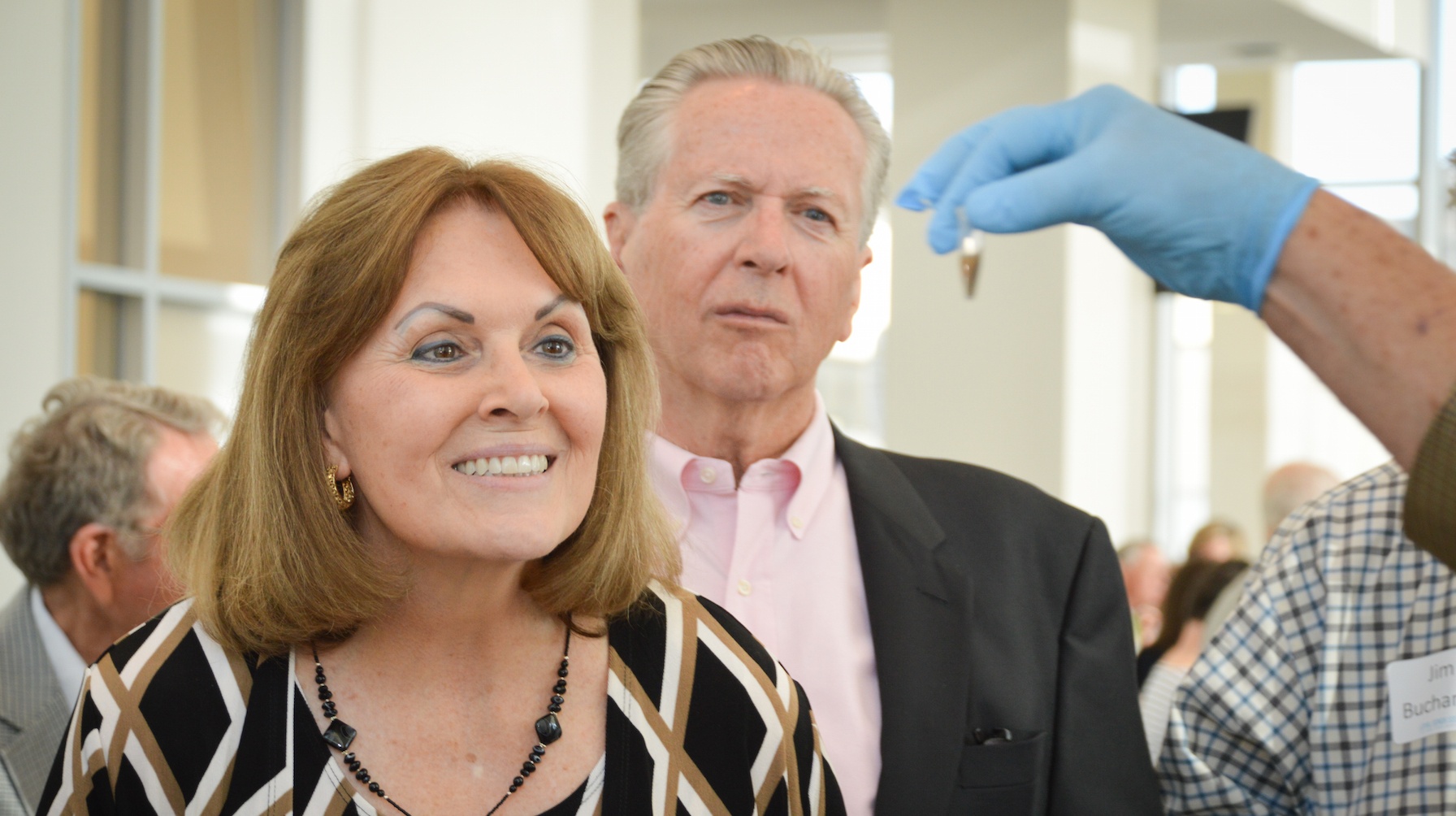 On Thursday, May 14, officials at OMRF brought more than 110 long-time donors together from across the state for the annual Loyal Donor Society reception at the foundation in Oklahoma City.

Every person who donates to OMRF has a unique and personal reason for giving to research, said OMRF Senior Director of Development and Gift Planning Ginny Carl, who helped with the event.

For Margaret Vater, it’s about finding a cure for brain cancer, which has taken the lives of two of her family members. John and Mary Ann Coates, began giving as a way to honor John’s late father, who died from heart disease; now they have been donating to disease research for 45 years.

For Charles and Alysa Newcomb, it’s a double-whammy: taking advantage of the biomedical tax credit and supporting valuable disease research simultaneously. Leah Beale donates in memory of her mother, who was treated at the old research hospital at OMRF in the 1970s.

OMRF established the Loyal Donor Society to celebrate the foundation’s most consistent donors, recognizing those who have made donations to the nonprofit biomedical research institute for a minimum of five years.

“We couldn’t do what we do without the support of individuals like this group coming together for the betterment of all our health,” said Carl. “OMRF started as a grassroots effort, and loyal Oklahomans are still the backbone of our support system.”

As a part of the evening’s program, OMRF President Stephen Prescott, M.D., provided a brief history of the nonprofit research institute and the critical role philanthropic giving plays in establishing the foundation of support for nonprofits like OMRF.

“It’s so wonderful to come back here to the place that took care of my late mother,” said Beale, an Oklahoma City resident. “It’s wonderful to see how much this place has grown and how it impacts people across the globe in really profound ways. Research that will maybe save your life one day is coming out of Oklahoma, and that’s special.”

Vater, an Oklahoma City resident and donor since 2012, echoed the sentiment. Vater also recently toured the facility with a group of residents from Epworth Villa.

“This is such a nice night, and it was delightful to be recognized,” said Vater. “We all give gifts for our own personal reasons, and OMRF is certainly deserving. We can see our donations are being used the right way. They are doing fascinating work.”

Each year OMRF welcomes a new class of Loyal Donors, who have been giving to OMRF for at least five years. The event is held to celebrate and recognize the difference they’ve made in helping others live longer, healthier lives.

“Disease touches every one of our lives in some form or fashion,” said Carl. “This group has chosen to step up and fight back against disease. I couldn’t have asked for a better event, and I look forward to building on it and showing our loyal supporters just how much we appreciate what they do for OMRF.”