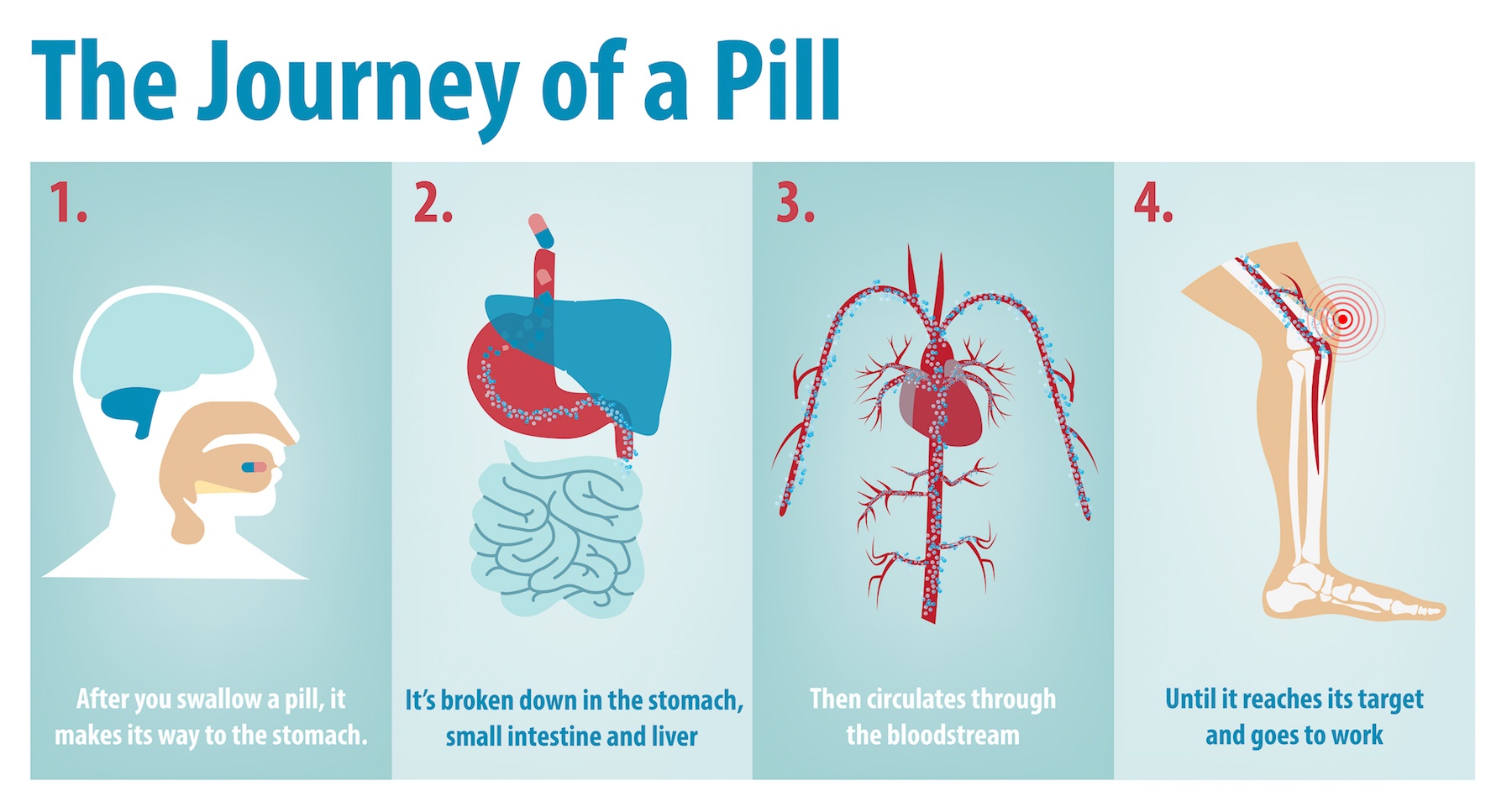 Home - News - Med-ucation: How smart are the drugs we take?

Americans spend an average of almost $1,000 each year on pharmaceuticals ranging from pain medications to antibiotics. But have you ever wondered how those pills know where to go once they’re in our bodies?

“Actually, they don’t,” said Oklahoma Medical Research Foundation President Stephen Prescott, M.D. “Drugs have no idea where to go when you take them.”

Luckily, your body has a system that is smart enough to get medicines exactly where they’re needed.

When you swallow a pill, it travels through the stomach and small intestine into the liver, which breaks it down and releases the remnants into the blood stream. “All organs and tissues in the body will be supplied with blood, and the medication goes along for the ride,” said Prescott.

Even though drugs travel in the blood throughout our body, said Prescott, each drug is designed to target certain protein molecules called receptors. In the case of a pain medication like ibuprofen or acetaminophen, they search out specific receptors generated by pain and inflammation as they course through the blood stream.

“Think of it like a lock and key,” said Prescott, a physician and medical researcher whose work focuses on blood vessels and circulation. “The medicine is like the key, and it looks throughout the body until it finds the lock where it fits.”

At the target spot—say it’s a sore knee in the case of ibuprofen—the drug molecules latch onto the target receptors as they flow by. “It’s not until it binds to that specific target the drug does its job,” said Prescott.

Once the drug gets hits the target and gets into the cell, this is when good things happen. The reactions between the drug and the target within the cell produce the desired effect—with ibuprofen and a sore knee, that would be a reduction of inflammation and pain—wherever it’s needed.

Conversely, Prescott said, this also is when side effects pop up, “Drug molecules also can bind to areas other than the target, especially if the two are closely related,” he said.

This is precisely what happens with chemotherapy drugs. “They search for fast-growing, rapidly dividing cells,” Prescott said. “So they find cancer cells, but they also find hair cells, which is why many patients undergoing chemotherapy lose their hair.”

Administering drugs locally can decrease side effects and drug toxicity while maximizing a treatment’s impact. For instance, topical antibacterial cream for a skin infection or a cortisone injection of a painful joint can avoid some of the side effects these medications create when they flow throughout the blood stream.

Still, said Prescott, many medications can only be administered in a way that results in having them circulate through the entire body. “Plus, most of us prefer pills to shots,” said Prescott.

Researchers at OMRF and throughout the world are working to develop “smarter” methods such as gene therapy to deliver therapy in a more targeted fashion. “Until that happens,” said Prescott, “we’ll have to live with dumb drugs.”