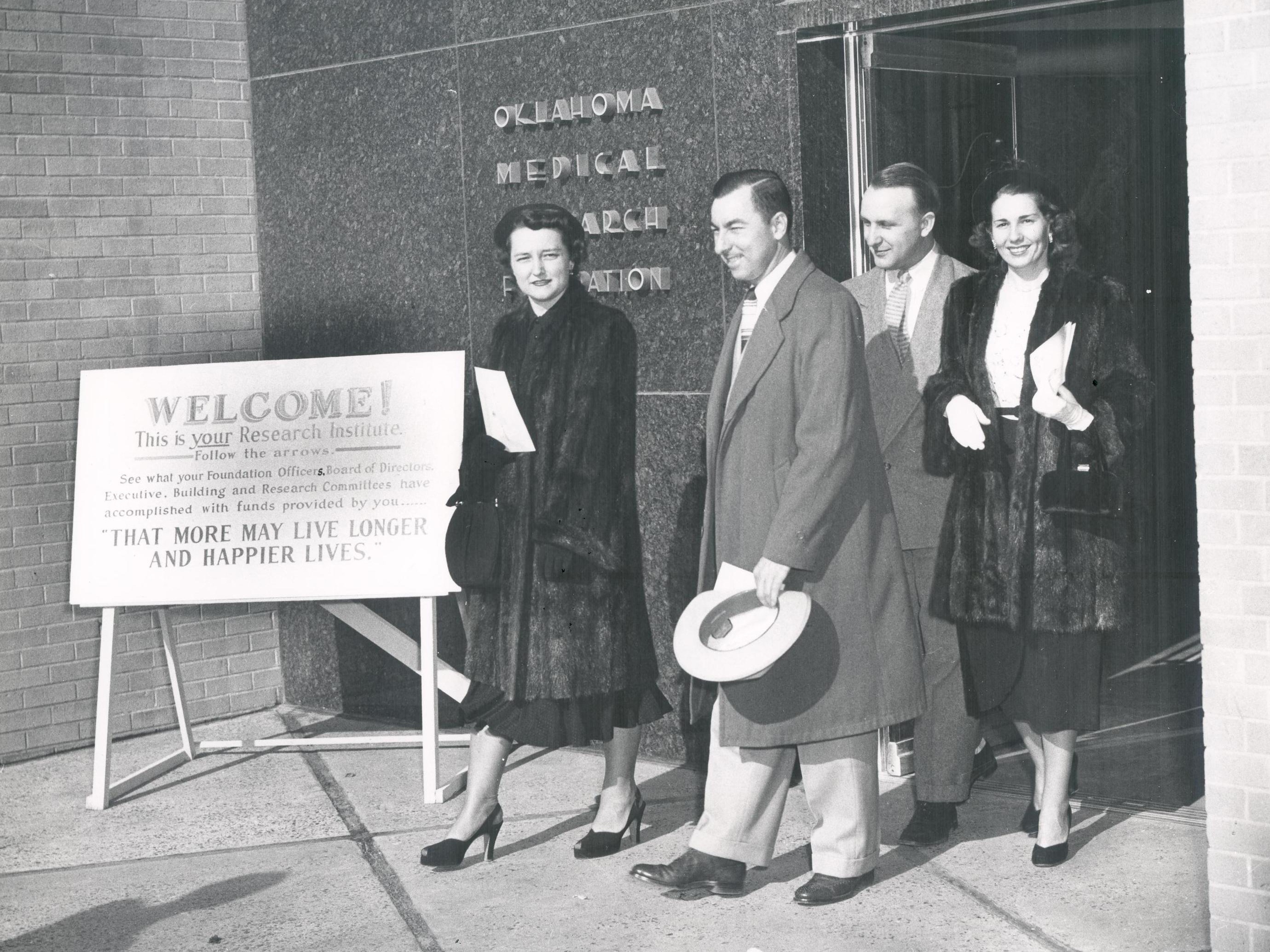 In 1946, DNA was just a collection of letters. Genes were nicknames for those with the given name Eugene. And the first biotechnology company wouldn’t be born for another three decades.

But in Oklahoma, a group of physicians and business leaders saw the potential that biomedical research held. This Sunday, Aug. 28, will mark the 70th anniversary of that moment, when Oklahoma’s Secretary of State granted the charter of the Oklahoma Medical Research Foundation.

“Oklahoma is a young state, so we’re often relatively late to the dance when it comes to historic developments,” said OMRF President Stephen Prescott, M.D. “But we were really on the cutting-edge when it came to creating OMRF.”

To fund construction of OMRF, Gov. Roy J. Turner led a drive that spanned all 77 of the state’s counties. The state’s physicians organized one fundraising campaign, and pharmacists, dentists and nurses followed suit with their own efforts. When Turner declared a statewide “Research Week,” organizers held 137 meetings in 42 cities and towns during a seven-day period.

All told, 7,000 Oklahomans donated a total of $2.25 million to build laboratories and a research hospital. And what began as a two-person operation in 1946 has grown into an internationally recognized research institute.

OMRF now employs more than 400 staff members who study cancer, heart disease, autoimmune disorders and diseases of aging. Their discoveries have yielded hundreds of patents and a pair of life-saving drugs now available in hospitals and clinics around the world.

In just the past month, OMRF scientists have made important new insights about blood circulation, autoimmune disease and the roots of vision loss in multiple sclerosis. They’ve also secured new federal grants to support their investigation into asthma and diabetes.

An experimental drug for the treatment of a deadly form of brain cancer developed by OMRF scientists is currently undergoing clinical trials in patients at the University of Oklahoma’s Stephenson Cancer Center. And in OMRF’s next-generation DNA sequencing facility, not only do researchers study the unique genetic “instruction booklet” that scientists have discovered we carry within us; they can now determine the precise genetic makeup of any person—in less than two days.

“I don’t think the founders and founding donors could have foreseen all the remarkable science that they’d make possible,” said Paul Kincade, Ph.D., OMRF’s vice president of research. “Still, I imagine they’d be pretty proud.”

To commemorate the foundation’s 70th birthday, OMRF will serve cupcakes and champagne to all employees on Friday afternoon in its research tower, the newest addition to foundation’s Oklahoma City campus. The “low-key” celebration, said Prescott, will recognize the foundation’s long-time mission.

“The technology and knowledge base have changed drastically since 1946, but OMRF’s goal has remained the same,” said Prescott. “We want to help Oklahomans and people everywhere live longer, healthier lives.”