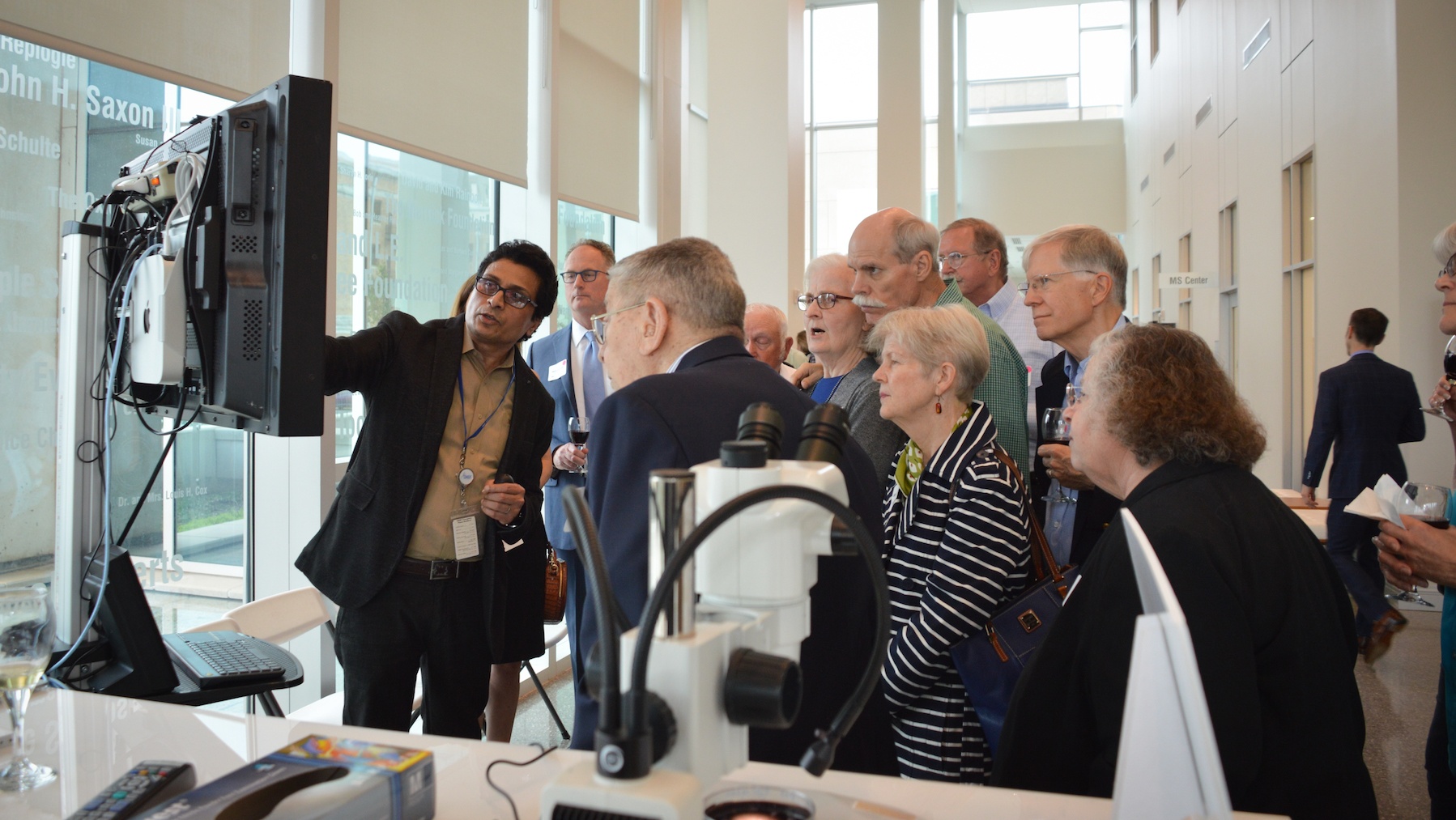 Earlier this month, a group of donors gathered at OMRF to get a better understanding of how the Oklahoma City nonprofit was using their gifts. But instead of the customary speech from a podium or PowerPoint, these OMRF supporters engaged in an evening of “scientific speed dating.”

In 15-minute intervals, the donors—125 long-term givers to the foundation—rotated through five different interactive lab stations hosted by OMRF scientists. Along the way, they learned how to use cheek swabs to gather DNA from inside a person’s mouth. They also peered through microscopes to examine heart tissue and saw frogs and tiny fish eggs that researchers use to study basic biological processes.

At one stop, scientists used liquid nitrogen from OMRF’s ultra-cold biorepository to flash-freeze Boba, the tapioca balls used in drinks. The crowd then sampled the delicious frozen treats, which resembled Dippin’ Dots.

“It’s so much fun to see the research going on, and they make it so accessible,” said Sharon Neuwald of Oklahoma City, who’s been giving to OMRF since 2005. “It makes science come alive.”

The event was OMRF’s way of honoring the members of its Loyal Donors Society. Established in 2015, the Society recognizes those who have made donations to the nonprofit institute for at least five straight years. And many have given for considerably longer, including retired Maj. Gen. Stanley Newman of Oklahoma City, who’s made a charitable gift to OMRF each year since 1973.

“I like the history of OMRF and that it started with regular people funding it,” said Edmond’s Lura Fabian, who began supporting OMRF in 1995 with her husband, Robert. “It’s sort of a hidden jewel, because many people aren’t aware that it’s here. But the quality of this facility is just phenomenal.”

“For us to be healthy, research is just one of those things we have to have,” said Robert Fabian. “Why wouldn’t you support research? It’s necessary for all of us.”

Long-term, consistent giving is the key to ensuring that scientists can make strides against disease, said OMRF Vice President of Development Penny Voss.

“It takes vision and faith to support something whose payoff won’t come today or tomorrow,” said Voss. “This group of donors understands that, and tonight was just our small way of saying thank you to them. They make everything we do at OMRF possible.”