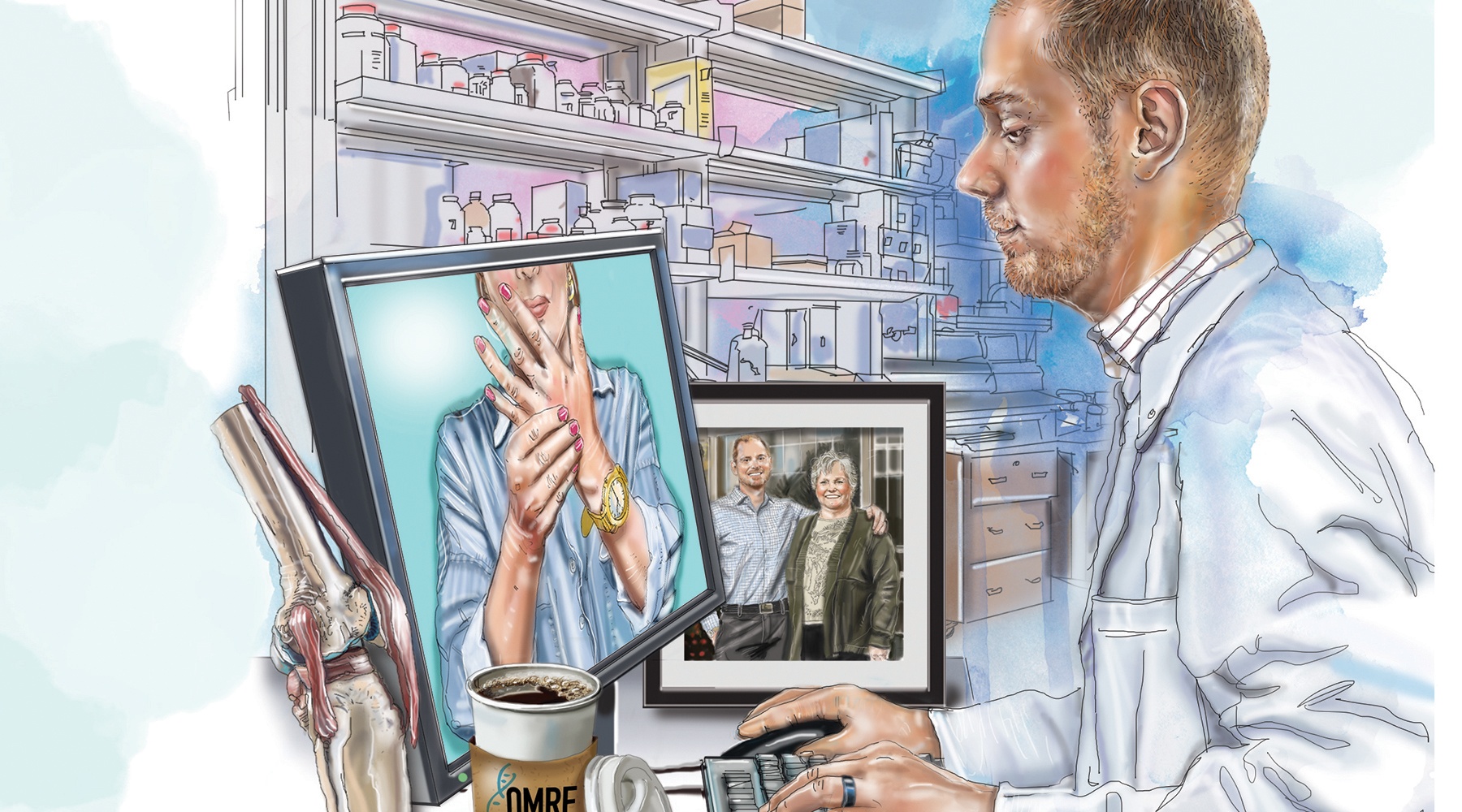 When Dr. Matlock Jeffries began his first day of work at OMRF in August, it may have been the smoothest transition in the foundation’s history. That Monday morning, he entered the same lab where he’d been studying osteoarthritis for the previous four years. Only now, he’d be doing it as a member of OMRF’s scientific faculty.

Since finishing his fellowship in rheumatology at the University of Oklahoma Health Sciences Center in 2016, the physician-scientist had been an assistant professor of medicine at OUHSC, where he’d also treated patients living with arthritis and other diseases of the joints, muscles and bones. But during that time, he’d conducted all of his experiments at OMRF. The choice to locate his lab at OMRF, he says, boiled down to one factor: “Environment.”

His longtime mentor, Dr. Judith James, led OMRF’s Arthritis & Clinical Immunology Research Program. He’d also done a post-collegiate stint as a lab technician at OMRF (and “had continued puttering around in Dr. James’ lab,” he says), so he knew the foundation and its people well.

Over time, he came to rely on the foundation’s core scientific facilities to support his research projects. “I realized that all of the future scientific work I wanted to do could only be done at OMRF,” he says. So, “It really made more sense for me just to move over to OMRF.”

At OMRF, he hit the ground running, receiving two new grants from the National Institutes of Health. On the first, he’s searching for a biomarker to aid in the early diagnosis of osteoarthritis, the most common form of the joint disease. In the second, he’s looking for microbial clues about how OA gets its foothold in the body.

For his work, he’s utilizing OMRF’s germ-free research facility, studying microbes of young laboratory mice genetically engineered to be susceptible to OA. Jeffries received funding through the NIH Research Innovations for Scientific Knowledge (RISK) program, which supports imaginative hypotheses that deviate from prevailing theories or practice. “Dr. Jeffries will be the first to evaluate whether gut microbiome transplantation” – implanting bacteria from digestive systems of healthy subjects – “may be used as a therapeutic agent to prevent OA,” says James.

Jeffries continues to see patients in his clinical practice, which has moved to OMRF and, in the current environment, increasingly relies on telemedicine. “If a patient is doing well, I would prefer to see them virtually, as it eliminates any potential risk of Covid-19 transmission and saves them the hassle of driving to Oklahoma City,” he says. Still, he admits, “It is hard to treat arthritis and autoimmune conditions virtually.”

Covid-19 has also thrown a wrench into a cherished midday ritual: regular lunches in the OMRF Research Café with his mother, Reta, who worked as a nurse and case manager at the foundation until her retirement in 2019. When the pandemic subsides and the café reopens, can the busy physician-researcher find time to restart this mother-son tradition? “Definitely,“ he promises. “At least once or twice a week!”