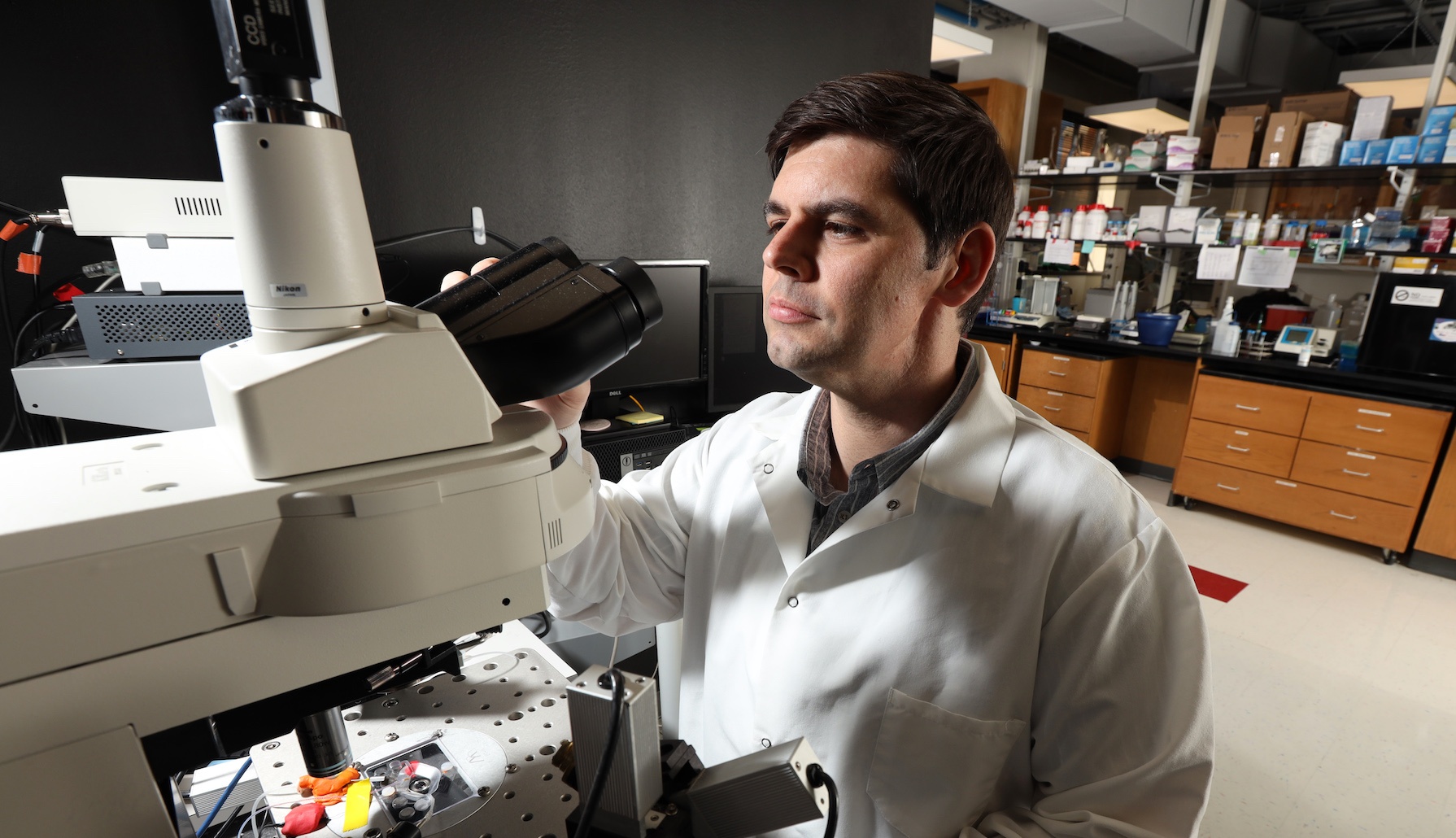 The National Institutes of Health has awarded an OMRF scientist $2.2 million to study the inner workings of brain cells.

OMRF researcher Tommy Lewis, Ph.D., received a five-year grant that will investigate the roles that mitochondria — the driver for energy and metabolism in cells — play in brain cells and how they respond in neurogenerative diseases.

“Finding the ‘why’ behind each part of our cells is critical to advancements in treating conditions that impact us as we get older,” said Lewis, who joined OMRF from Columbia University in 2018. “Diseases like Alzheimer’s and Parkinson’s affect millions of Americans — but to find relief, we need to understand the basics.”

The grant was awarded under a federal program for promising scientists still early in their careers, known as the Maximizing Investigators’ Research Award, or MIRA. The competitive program offers long-term support, the flexibility to pursue new research directions and favors bold, risk-taking science.

“Dr. Lewis is part of the remarkable class of young researchers who have joined OMRF’s faculty in recent years,” said Holly Van Remmen, Ph.D., who leads the foundation’s Aging and Metabolism Research Program. “This grant will be pivotal as he continues to establish his lab and allow him to dig deep into the basic functioning of the brain. This is the kind of science that paves the way for new drugs and therapies that target devastating conditions.”

Called “the powerhouse of the cell,” mitochondria generate the energy produced in cells and keep them running properly. When brain cells begin to fail, disease is the result. Research shows that different areas of these cells contain specialized mitochondria, but the reasons why remain a mystery.

Using a unique imaging method, Lewis’ laboratory team at OMRF will observe the function of different mitochondria in brain cells and track what happens during disease progression in real time.

“In neurodegeneration, there’s a belief that only one part of the neuron is affected at the early stage of disease and as deterioration continues, it spreads. Research shows this is true in Parkinson’s,” Lewis said. “To stop the progression of these diseases, we need to be able to identify and target that specific part of the cell without damaging the healthy parts.”

Breaking mitochondria into subtypes will allow Lewis’ lab to pursue this possibility on a very basic level, and dig deeper than ever before.

“Learning how to prevent the deterioration from progressing could save the rest of the cell and eventually, we hope, the patient’s quality of life,” Lewis said.