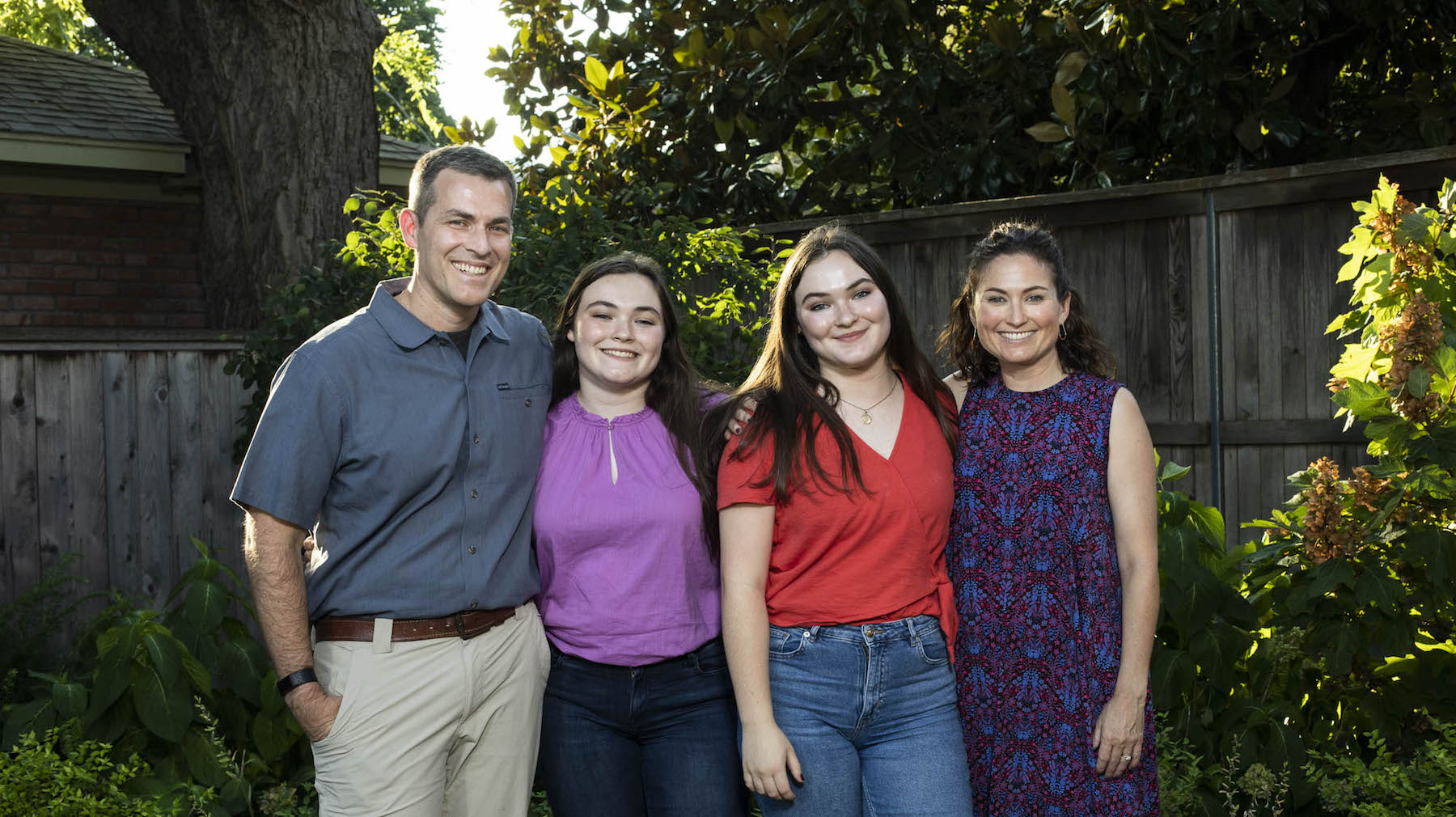 On Valentine’s Day, Drs. Courtney and Tim Griffin will drive to work together like they always do. When they arrive at OMRF, where they’ve both been scientists since 2008, they’ll head to their labs. Their separate labs.

You see, Courtney is a cardiovascular biologist who investigates the development of blood vessels. Meanwhile, Tim, a physiologist and bioengineer, studies obesity and its relation to the most common form of arthritis.

“We each have our own research interests and our own independent labs, but we’ve actually never been closer scientifically than when OMRF brought us on together,” said Courtney.

That ‘together but separate’ approach, they say, has served their careers and family well.

The couple met in 1994 as undergraduates at Harvard. “We were both working alumni events, and Courtney was more the figurehead that kind of brought us together,” Tim said.

“He’s saying I was his boss,” Courtney interrupted, jokingly. “We were setting up bars for reunion events, and I’d risen through the ranks to be in charge of organizing a group of trustworthy ‘manual laborers’ to haul heavy boxes of liquor around.”

Tim, a member of the football team, was one such laborer. But it turned out the pair had more in common than a student job: Both had their hearts set on careers in research.

The two aspiring scientists started dating, and they married in 1997. With Courtney already pursuing her Ph.D. at the University of California, San Francisco, Tim enrolled in graduate school at Cal-Berkeley, traveling via bus or subway every day for five years from the couple’s San Francisco apartment.

When both subsequently landed postdoctoral fellowships in North Carolina, it was Courtney’s turn to commute. For the next half-dozen years, they lived in Durham, where Tim worked at Duke University, while Courtney drove and biked nearly an hour to her job in Chapel Hill.

In 2008, OMRF offered both scientists the chance to start their own independent labs in Oklahoma City. “There was definitely high-fiving going on when we landed jobs at the same institution,” said Courtney.

“Especially in the early years, we were perpetually tired,” said Tim.

At home, the couple divvies up tasks like cooking, cleaning and taking the kids to doctor’s appointments, while trying to do as much together as a family as possible, like traveling to the girls’ out-of-state volleyball tournaments. “It’s always been a partnership,” he said.

For more than two decades, that teamwork has proved the key ingredient to professional and personal fulfillment. “This is a challenging and time-consuming career, and the benefit of having your most trusted, closest person in life nearby as a sounding board and support system is incredible and empowering,” said Courtney.

As Courtney spoke, Tim nodded in agreement. “One of the roles of being a scientist is being the cheerleader for everybody in your lab. But we need cheerleaders, too,” he said. “And we each get to see our biggest and most loyal supporter every single day. It’s amazing.”