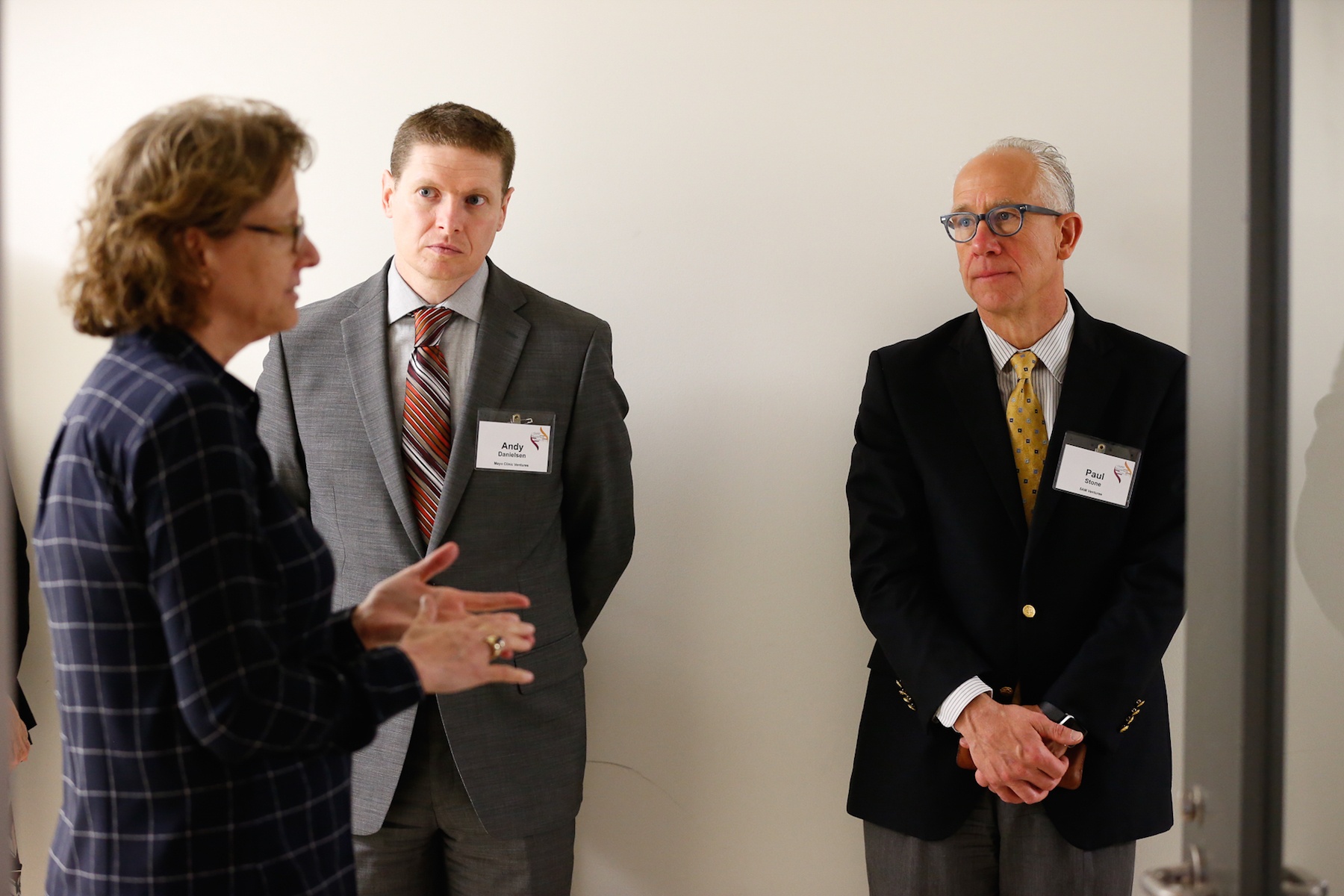 On Tuesday, 35 leading venture capitalists and biotechnology industry executives from across the country joined 95 state scientists and business leaders at the Oklahoma Medical Research Foundation at the 2017 OMRF BioVenture Forum.

The goal of the event was to explore the commercialization of technologies and encourage interaction between industry and with scientists in Oklahoma, as well as increase the visibility of the quality research underway at OMRF.

Visiting attendees represented some of the top names in the industry, including Pfizer, Merck, AstraZeneca, AbbVie, 5AM Ventures and Lilly Ventures.

“Many consider Oklahoma a fly-over state, so it can be difficult to get name recognition even though OMRF has been highly successful for a very long time,” said Manu Nair, OMRF’s Vice President of Technology Ventures, who organized the event. “When people think of Oklahoma, they think of oil and gas. We want them to see a biotech mecca here, as well.”

“It’s important to spend time with people in different venues to understand what’s important in different parts of the country,” said Miletich. “To come to Oklahoma and interact and hear about opportunities and perhaps share what I know, I think it’s useful for the goal all of us have: trying to create medicines that extend people’s quality and length of life.”

In addition to panel discussions, the day’s events included a tour of OMRF’s facilities, networking sessions and a reception with Oklahoma Governor Mary Fallin at the governor’s pavilion.

“When people think of Oklahoma, bioscience may not be the first word that comes to mind. But the bioscience sector has joined our heritage industries of energy and agriculture to become a major force in the state’s economy,” said Fallin. “The science here is cutting-edge, but we’re still a well-kept secret in the biotech world. That’s a combination that spells opportunity.”

Lijun Xia, M.D., Ph.D., program chair of OMRF’s Cardiovascular Biology Research Program, was one of many foundation scientists in attendance. Xia said that connections he made at OMRF’s first BioVenture Forum, which took place in 2015, helped him forge a research collaboration with an industry partner and that he hoped this year’s event would plant the seeds for further partnerships.

“As scientists, we typically do not openly interact with industry professionals,” said Xia. “So after interacting with people from biotech at this forum, we may learn the translational potential of our basic research and form collaborations to develop new tools for diagnosis and therapies. The potential is great, and it is important to bring people in to see what we do here.”

Nair said the objective of this year’s forum is to dig deeper into more specialized aspects of biopharma, investment business and technology development to showcase the biomedical research capabilities in Oklahoma and at OMRF. Discoveries incubated by OMRF’s Technology Ventures office have resulted in three drugs that received FDA approval and a diagnostic test currently available on the market.

“The goal of the forum was to spark commercialization by bringing in folks who have varying interests so we can get a broad spectrum of ideas and thoughts regarding tech commercialization and investment,” said Nair. “I think it was a success, and partnerships will blossom out of this as a result.”