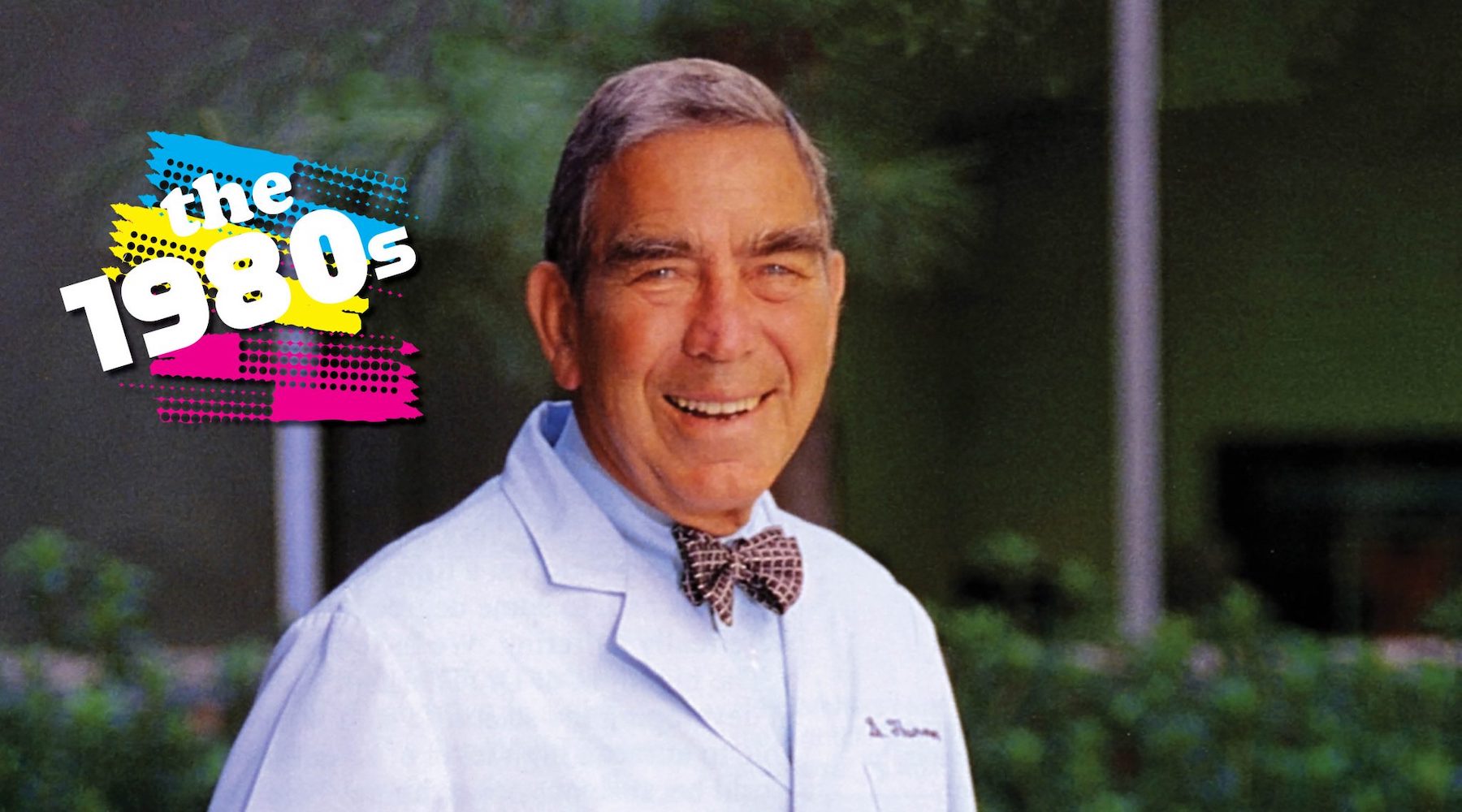 Home - Findings - A Time of Growth

When Dr. William Thurman, above, took the helm of OMRF, he brought the lab coat he’d worn since his days training as a pediatric oncologist.

That powder-blue garment, along with the bow ties he favored, would become synonymous with OMRF throughout the 1980s (and most of the 1990s). But his sartorial flourishes would prove the least of his many legacies at OMRF.

He immediately set to work building the foundation’s scientific programs. He first focused on cancer research, a rapidly emerging field in which OMRF’s presence had diminished. Dr. Paul Kincade, who then ran a thriving cancer research lab at Memorial Sloan-Kettering Cancer Center, was one of Thurman’s first targets. “After a single visit to OMRF, my lab staff was ready to leave New York and move to Oklahoma. And that’s what we did,” recalled Kincade, who would go on to build and lead an internationally recognized program in Immunobiology and Cancer for three decades at OMRF.

Sensing that autoimmune diseases were another area of increasing need, Thurman recruited Dr. Morris Reichlin from the State University of New York at Buffalo to start a new research program in 1981. Today, that program, now known as Arthritis and Clinical Immunology, is one of the nation’s leaders in the field. For its research on diseases that include lupus, rheumatoid arthritis, osteoarthritis and multiple sclerosis, it has three times earned recognition from the National Institutes of Health as one of only 10 Autoimmunity Centers of Excellence.

Thurman’s ability to identify and cultivate scientific talent paid similar dividends in cardiovascular biology, where he brought in Drs. Charles Esmon, Fletcher Taylor and Rod McEver. All would go on to make watershed contributions to the field, and their discoveries would later also lead to life-changing therapies for patients.

As OMRF’s research thrived, the foundation expanded markedly, adding new buildings and increasing its research budget. “One of the things I’ve liked best about this job has been the opportunity to see OMRF grow from relative infancy to become a mature center of research excellence,” Thurman told The Oklahoman upon his retirement in 1997. “It’s also been a real pleasure to see research translate from our laboratories and become actual treatments for human disease.”

Since the Sir Alexander Fleming Scholar Program began in 1956, more than 600 Oklahoma high school and college students have received an introduction to biomedical research by spending a summer in OMRF’s labs. Both OMRF Vice President of Clinical Affairs Dr. Judith James, pictured, and OMRF Vice President of Research Dr. Rod McEver kicked off their scientific careers as Fleming Scholars.

“I was bound and determined to find a way to do chemistry experiments with spiders. I found a professor at Oklahoma State who worked with Brachypelma [the technical name of tarantulas]. I packed the spiders into my makeup case and drove to Stillwater in my Pontiac Firebird and learned how to milk a tarantula. I thought if I could isolate the venom, I could do something chemistry-ish.

I put the spiders in a shoebox-sized plastic cage and knocked them out with dry ice and ether. I used a hollowed-out sponge to rest them on their backs, then secured them with Velcro from a pair of kids’ sneakers. After applying electrical current at the base of their fangs, I’d catch the venom in a capillary tube.

I used chromatography to separate venom toxin into different components. I studied some of them for nerve regeneration.

I applied for OMRF’s Fleming Scholar Program that year, and I told this story during my interview. I was accepted. But I also had the opportunity to go and be a great tarantula hunter in Honduras that summer.