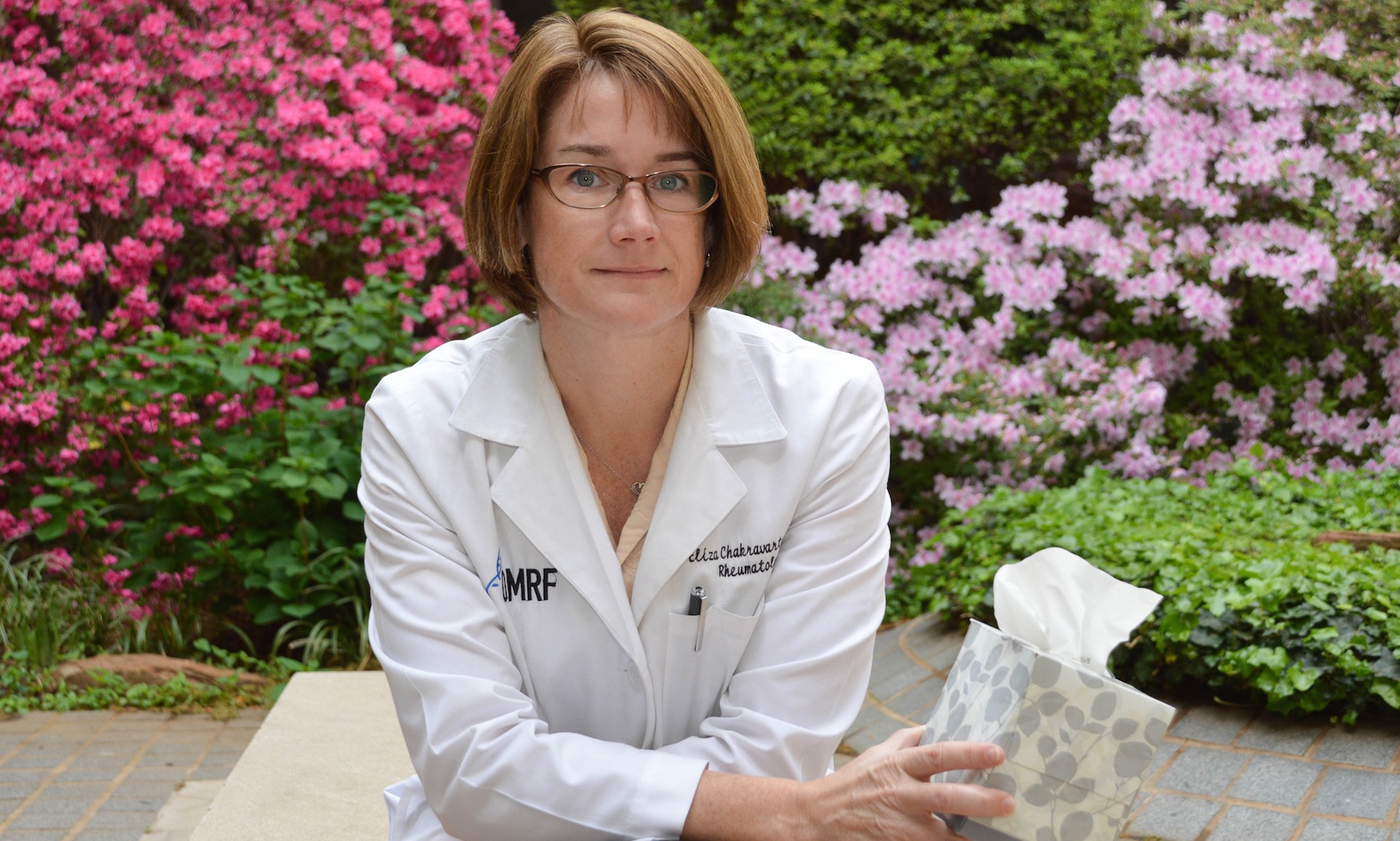 Cooler temperatures, changing leaves and college football are among the many great things about fall in Oklahoma. But many think of autumn as a season dampened by weeks of watery eyes and runny noses.

And it’s not just because of the uptick in colds and viruses, according to OMRF scientist Eliza Chakravarty, M.D.

“There’s a lot to love about Oklahoma this time of year, but it can be a brutal season for allergy sufferers,” said Chakravarty, a physician-scientist in OMRF’s Arthritis and Clinical Immunology Research Program.

In fact, Oklahoma is one of the most challenging places to live for fall allergies. Oklahoma City ranks No. 6 and Tulsa comes in at No. 12 in the 2016 Fall Allergy Capitals ranking from the Asthma and Allergy Foundation of America.

But why is Oklahoma so bad for allergies compared to other states?

“The conditions are just perfect for allergens to wreak havoc,” said Chakravarty. “Not only does the state’s climate allow for prominent allergens to grow, we also just happen to reside in one of the windiest places around. So it’s not just what’s growing, it’s also that it’s blowing.”

In the fall, ragweed and mold are among the most likely cultprits, but there’s another perpetrator involved that determines whether or not you’re affected at all – your immune system.

“Technically there is nothing inherently dangerous about ragweed,” said Chakravarty. “The problem occurs when your body’s immune system overreacts to it and its pollen.”

The immune system is primed to fight off trespassers that can make you sick, like viruses. But sometimes it becomes confused. For those with allergies, the body senses a substance like ragweed and thinks it’s discovered a hazardous intruder.

The reaction causes histamines and other substances to be released into the bloodstream, resulting in issues like constricted airways, watery eyes and runny noses. If allergies start to affect your lung function and you notice wheezing or tightening in the chest with breathing, it’s time to see the doctor.

“It’s essentially like going after a fly with a sledgehammer,” she said. “It’s overkill, and because the allergen is all around us, the immune response to it doesn’t do any good.”

Histamines, like most chemicals in the body, have more than one job. One thing they do is keep us awake and alert, which is why using antihistamines to treat allergies often results in drowsiness.

But even though researchers know exactly what occurs in the immune system, they are still striving to figure out why it happens in some people but not others.

While the ‘why?’ is still in question, there are effective measures for treatment. Chakravarty recommends limiting exposure to the outdoors in the fall as much as is feasible. Before prolonged outdoor events, like a soccer or football game or visiting a pumpkin patch, she suggests using nasal washes and pre-medicating with anti-allergy medications. Intranasal steroid preparations are now available over the counter and don’t have the side effects of dryness and sleepiness that other medications can have.

“Many good medications are available over the counter and can greater improve quality of life, but if your symptoms prove too much to handle, it’s time to go see an allergist,” she said. “While the root causes are still in question, severe allergies can—and should—be treated. Don’t let them spoil your fall.”