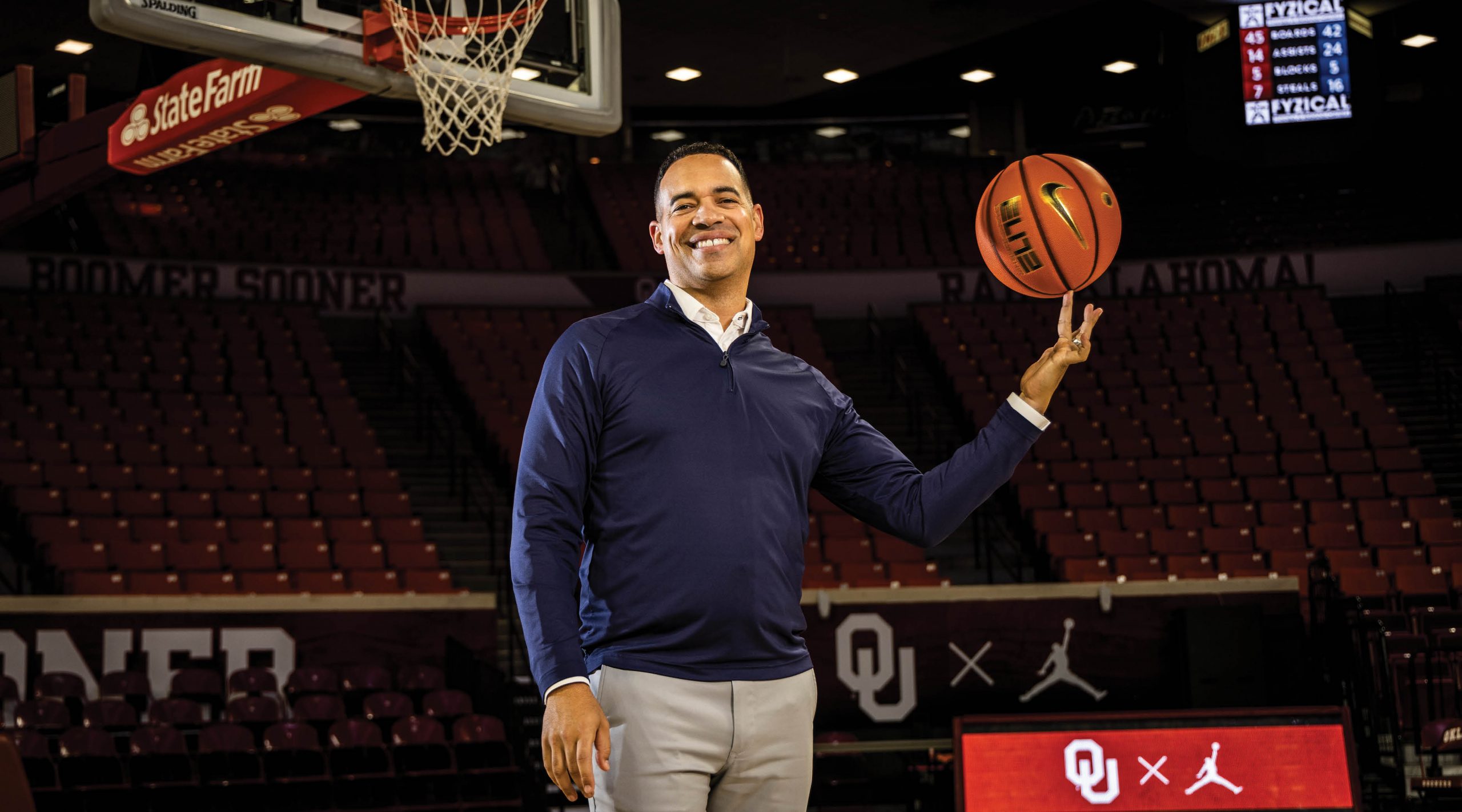 Home - Findings - Nothing But Net

OMRF’s newest fundraiser brings a competitive fire to everything he does.

Even though he no longer plays basketball, he still gets caught up in the games. This can prove a bit awkward when he’s sitting courtside at the Lloyd Noble Center, where he provides color analysis on the radio broadcasts for the University of Oklahoma men’s games.

In exciting moments, Henry typically springs to his feet. “He has a hard time staying down,” says Toby Rowland, Henry’s broadcast partner since 2016. According to Rowland, Henry’s penchant for uncoiling his six-foot-three frame during games has earned him a nickname: “Seatbelt. As in, we need to put one on him to keep from standing up!”

Since June, Henry has brought that same enthusiasm to OMRF, where, as senior director of major gifts and annual campaigns, he’s the newest member of the Development team. For him, sports provide a valuable template for fundraising. “You have to get your shots in every day,” he says. “If you want to be successful, you need to put in the work.”

As an athlete, Henry spent many years putting in the work. He grew up in Denton, Texas, where his shooting and playmaking skills, honed for many years practicing and playing in the greater Dallas area, made him one of the country’s top 100 basketball recruits. He accepted a scholarship from the University of New Mexico, where he became a starter by the end of his first year. He developed into a sharpshooter, making 102 3-point shots on teams that were part of a 41-game home winning streak and made it to the second round of the NCAA Tournament in 1999 before losing to the University of Connecticut, the eventual champion.

On his recruiting visit to New Mexico, Henry met the point guard on the women’s team, Aiyana Nash. When he enrolled, the pair started dating. They married in 2002 and now have two children, Emma, 17, and Nash, 14. “Whenever the assistant coach who introduced us sees our kids, he tells them, ‘If it weren’t for me, you guys wouldn’t be here,’” Henry says.

After three years at New Mexico, where he scored as many as 28 points in a game, Henry followed his former coach to Baylor University and finished his college career. Still, like most collegiate players, he dreamt of making it to the NBA.

He spent a year playing professionally in the United States Basketball League, a forerunner to today’s G League. At the season’s end, he was offered a chance to continue his career in Germany; he opted, instead, to enroll in graduate school at Baylor. “I was 23, I’d just gotten married, and Aiyana was going to teach public school in Waco,” remembers Henry. “I thought, ‘This is going to be a better opportunity to get a master’s degree, be around college athletics and start my post-basketball career.’”
__

Henry made the most of his time at Baylor, earning a master’s in sports management and serving as a graduate assistant on the men’s basketball team. That led to a job as director of student-athlete development, followed by another as athletic director at the Methodist Children’s Home in Waco, where he got his first experience in nonprofit fundraising.

When Aiyana, who’d by then completed her doctorate, accepted a position in the Jeannine Rainbolt College of Education at the University of Oklahoma, Henry soon followed. He spent seven years at OU, most of it as a development officer specializing in major gifts to athletics. He loved the role, but when OMRF Vice President of Development Penny Voss contacted him about a newly created position, he saw a unique opportunity.

“The more I talked to Penny about joining her team, the more excited I became. It was almost like a calling,” Henry says.

In Henry, Voss sees someone who will help elevate fundraising efforts at OMRF. “Kevin has an energy and confidence about him that inspires people,” she says. “He knows how to set goals, rally a team behind those goals, and achieve success.”

Henry has hit the ground running at the foundation, taking a key role in several of OMRF’s fundraising and awareness initiatives. And like a seasoned competitor, he’s doing the daily work – making phone calls, scheduling meetings, building relationships – with an eye toward the long term.

“Finding what donors are passionate about and aligning that with the needs of our organization, that’s what fundraising is,” he says. He’s already looking forward to the day those efforts start paying off. When they do, he’ll celebrate those wins with each of his OMRF teammates.