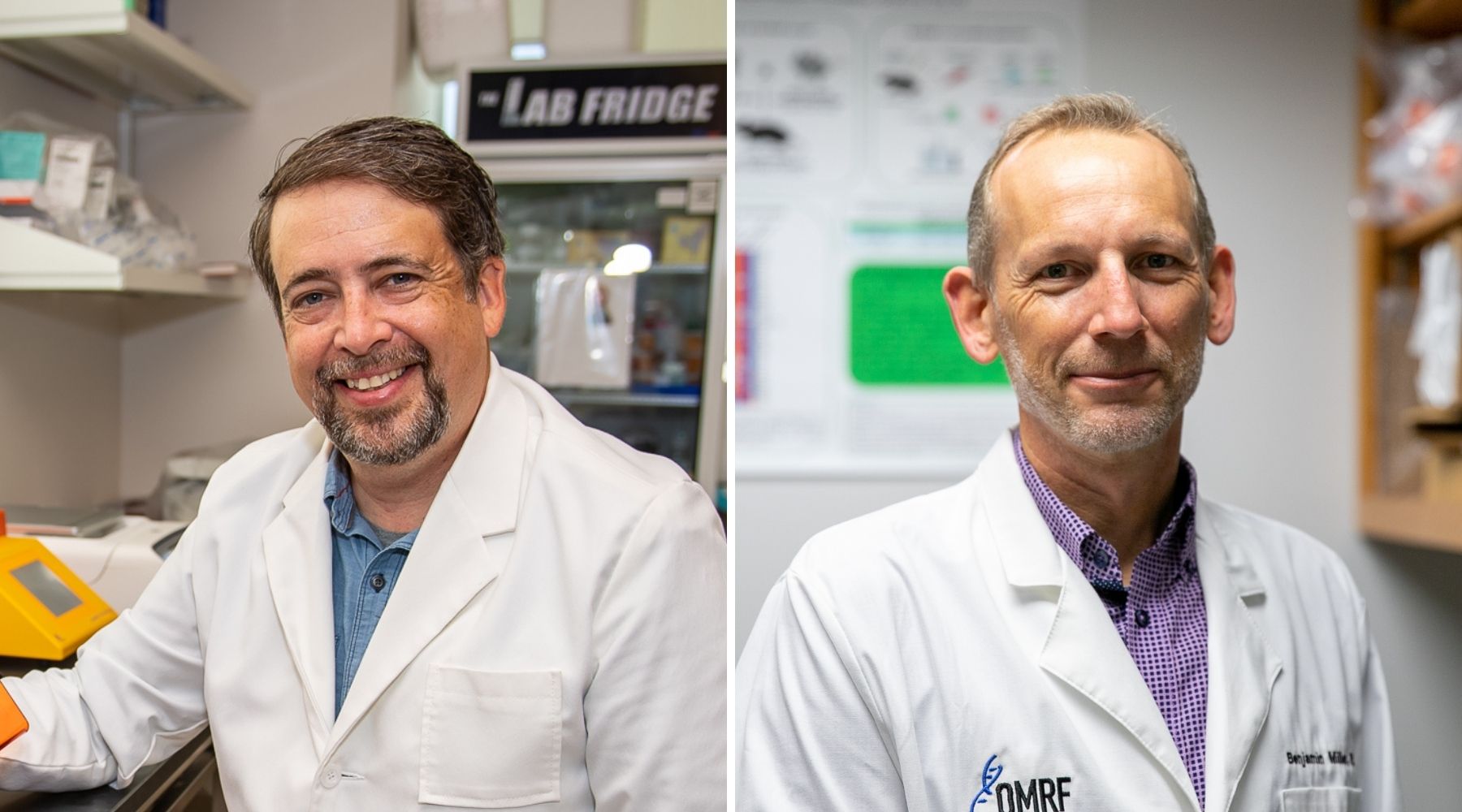 Researchers Bill Freeman, Ph.D., and Benjamin Miller, Ph.D., received grants in the inaugural round of the funding program to study cellular functions that impact “healthspan,” or the period of life without disease and disability.

According to the National Council on Aging, 80% of adults over age 65 have at least one chronic condition, while nearly 70% have two or more. The U.S. Census Bureau estimates that by 2028, 1 in 5 Americans will be 65 or older.

“Aging is the leading risk factor for all chronic diseases. If we can slow the process, we may simultaneously slow or prevent the onset of conditions like cancer, cardiovascular disease, Alzheimer’s and dementia,” said Miller, a physiologist in OMRF’s Aging and Metabolism Research Program.

The Longevity Impetus Grant program, headed by Danish scientist Martin Borch Jensen, Ph.D., is intended to accelerate progress in aging research by evaluating brief grant applications on a short turnaround – less than a month from submission to approval. For a traditional federal grant, the overall process from planning to award may take two years or more.

“Although it sneaks up on you, age-related decline is guaranteed to lead to disease and disability for every person on the planet,” said Impetus founder Jensen. “We’re supporting projects that could advance the field as a whole, whether by improving research tools, answering key questions or testing the robustness of exciting results.”

Studies supported by the Impetus Grants are unusual because they might be considered too risky by traditional funding groups.

“In biomedical research, we tend to make small steps forward on projects we’re already confident will be successful,” Freeman said. “That progress is important but isn’t moving forward as fast as it could.”

Freeman’s Impetus-funded project, a collaboration with OMRF scientist Jonathan Wren, Ph.D., will study biological age by measuring the accumulation of changes to the genome. Miller’s study, in cooperation with Freeman’s lab, will observe how proteins in an individual cell are broken down and rebuilt, rather than the standard practice of observing large groups of cells at once.

“These are hard measurements to take, and it has always been done a certain way,” said Miller. “No one has ever come close to accomplishing what we’ve proposed, so no one wanted to take a chance on funding it until now.”

Freeman said the combination of fast, innovative grants and established funding methods foster a “productive scientific environment.” The proposals accepted for these grants were possible because of the ideas and data already derived from steady, long-term support.

“We always have a new big idea,” Miller said. “This is our opportunity to act on one of those big ideas that could lead to a big discovery.”