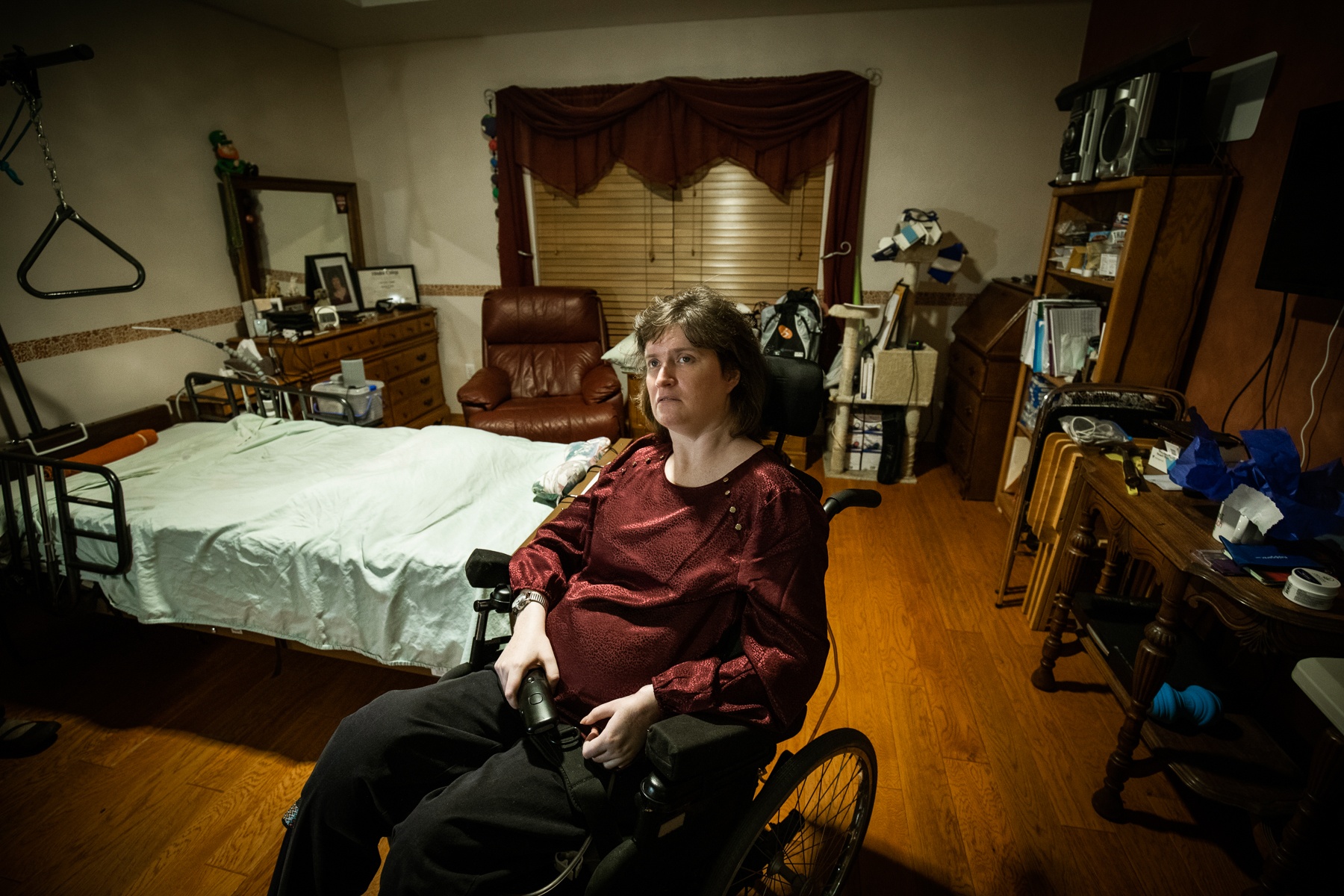 Home - News - Searching for light in the darkness

Leah Campbell remembers the day she lost her vision. She was a sixth grader, in her bedroom one morning in Altus, when she heard her mother walk in.

“They are on,” said her mother.

It would take 17 years before Leah and her family would learn what had caused her blindness.

In that time, the little-known disease that took her eyesight would also rob her of her mobility, leaving her confined to a wheelchair.

Neuromyelitis optica, or NMO, occurs when the body’s immune system attacks the spinal cord, optic nerves and, in severe cases, the brain. The illness affects about 4,000 Americans, 80 percent of whom are women. Over time, patients typically develop blindness, muscle weakness and paralysis.

“NMO was initially considered a subset of multiple sclerosis and is so similar to MS that it often gets misdiagnosed,” said Bob Axtell, Ph.D., a scientist at the Oklahoma Medical Research Foundation who holds a pair of grants from the National Institutes of Health to study the rare disease. “This can be devastating for patients.”

That was the case for Leah. For years, doctors treated her with a common MS medication called interferon beta-1a, or Rebif. But not only does this medication fail to help NMO patients; it actually worsens their conditions.

It wasn’t until 2006, years after Leah had become the first blind graduate of Rhodes College in Tennessee, that scientists developed a definitive test for NMO. The test revealed that she suffered from the disease, and her physician, Gabriel Pardo, M.D., immediately took her off the drug. Instead, he began treating her with rituximab, an immune-suppressing monoclonal antibody known to control NMO disease activity.

While rituximab is not a cure for the underlying condition, in the 13-plus years Leah has been taking the medication, she’s been free of the sudden, violent attacks that had plagued her life until that point.

“Her right side was fine, but on the left, she would sort of vibrate,” said Leah’s mother, Theresa. “Her foot would turn in, her leg would draw up tight, and her hand would clench. Her whole ribcage would spasm uncontrollably.”

Before rituximab, Leah would sometimes experience 40 to 50 of these episodes a day. Since going on the drug, said Pardo, “her disease activity has been fully controlled.”

Still, the disease had already run wild in Leah’s body for the better part of two decades. “She has deficits that date to before she was a teenager,” said Pardo, a neuro-ophthalmologist who treats Leah at OMRF’s Multiple Sclerosis Center of Excellence, where he serves as director. “The blindness, the paralysis – unfortunately, those are things we can’t reverse.”

Today, at the age of 41, Leah is confined to a wheelchair and lives with her parents in Mustang. She requires regular care at OMRF, as she is at constant risk for fractures, skin ulcers, and bladder and bowel dysfunction.

Still, each week, with her parents’ help, Leah also attends aquatic and equine therapy sessions and a Bible study class. This past summer, she started a new job with a company that provides voice-activated smart controls for operating lights, locks, thermostats and other home systems.

She’s particularly excited about her new service dog, a chocolate lab named Seaclaid (Gaelic for chocolate) her parents are training to help her become more independent.

Despite the hurdles she faces, Leah remains optimistic about her future. “I’m just a positive thinker. My cup’s always half-full,” she said.

For OMRF researcher Axtell, patients like Leah drive his search for answers. “The more we understand about NMO,” he said, “the better the outlook will be for people struggling with this horrible condition.”