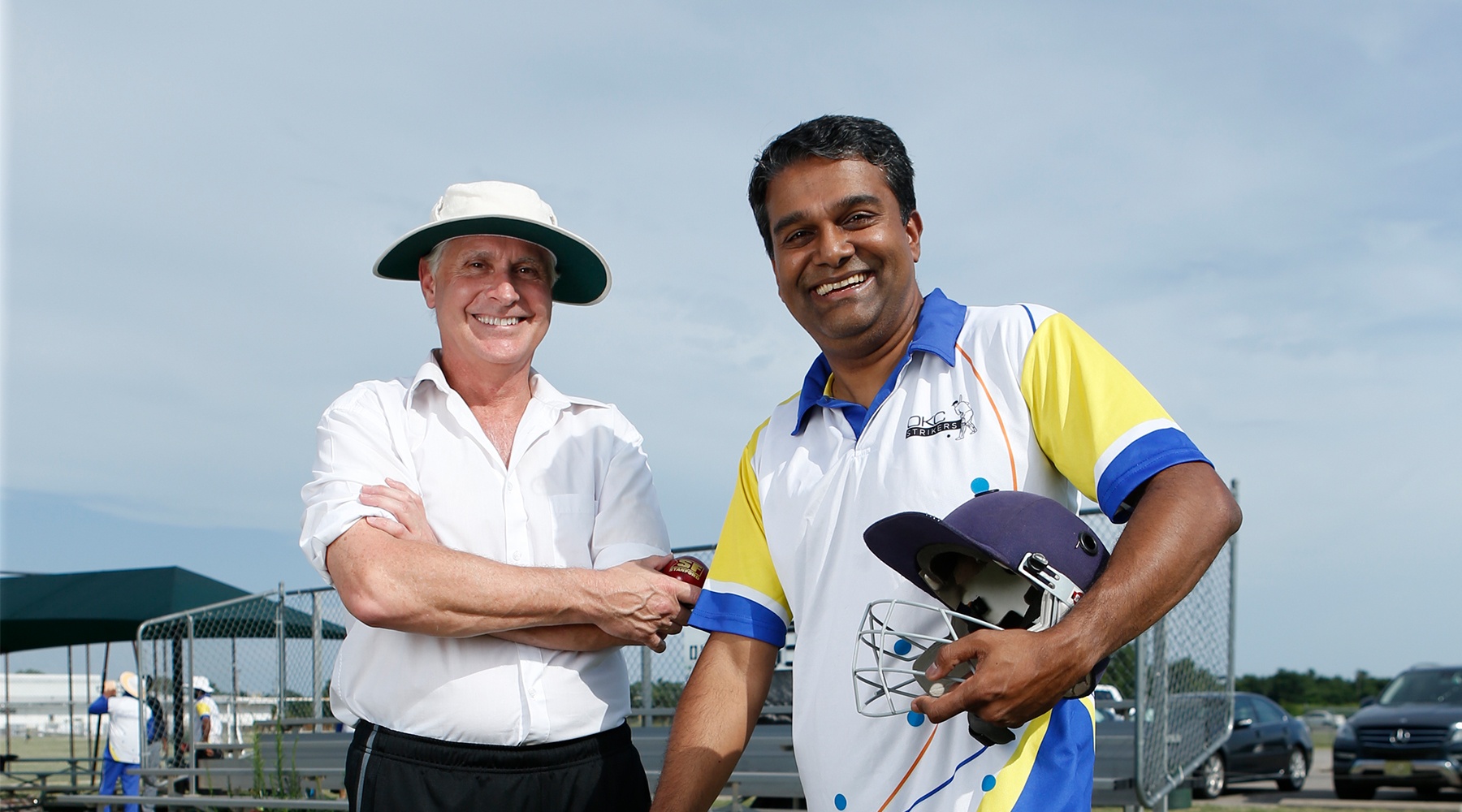 On the street in front of the family home in southern India, Manu Nair’s older brother would gather with neighborhood friends for impromptu cricket matches. Forced by his mother to include his younger sibling, the elder Nair would hand his 7-year-old brother a bat and pitch a hard, cork-cored ball at him at top speed. The idea was to scare the youngster off.

Nair loved the excitement and competition. He developed some talent with the bat, learning to hit the fireballs the older children hurled at him. But, over time, his true cricket talent shone through. He was a bowler, the sport’s equivalent of a baseball pitcher.

He joined his school team and bowled through high school. But he put aside his cricket whites in college, and he didn’t don them again until more than a decade later, not long after he’d taken a job at OMRF as a licensing associate. “I was young and single and new to Oklahoma,” recalls Nair. “So when a guy who worked in one of OMRF’s labs asked me if I wanted to come out and play, I said, ‘Sure!’”

Oklahoma City seems an improbable home for a cricket team. But twice each week from April until November, a group of enthusiastic local players—most, like Nair, expatriates from countries formerly part of the British empire—met up in south Oklahoma City to practice and compete against teams from around the state and region.

Known as the Strikers, they’d secured permission to build a pitch, a concrete rectangle covered with an Astroturf carpet that measures 66 feet by 10 feet, on a piece of city-owned land. On the pitch, a bowler hurls a red ball the size of an apple at a batsman. Fielders position themselves in a circle around the pitch, awaiting the chance to catch the ball if the batsman makes contact.

The Strikers were, says Nair, an enthusiastic lot. But they were disorganized. They also lost a lot.

Still, Nair enjoyed playing. And he made new friends. In particular, he grew close to a fellow Striker who also worked at OMRF.

Dr. Andrew Westmuckett had grown up playing cricket in East Sussex, England, and he’d continued to play collegiately at Greenwich University. Like Nair, he’d left the sport behind for a decade or so—during which time he’d earned his Ph.D. in biology—but picked it back up when he’d come to OMRF for a post-doctoral fellowship in the Cardiovascular Biology Research Program.

Over time, Westmuckett and Nair realized they shared a vision for improving the Strikers. With Westmuckett as president and Nair as treasurer, they wrote up a charter for the club and secured 501(c)(3) nonprofit status. They put systems in place for selecting players and collecting dues. They introduced a strict “If you don’t practice, you don’t play” policy at matches. Probably not unrelatedly, says Westmuckett, “We started to play a lot better.”

In 2008, the Strikers made it to the Oklahoma-Kansas championship for the first time. In the title game, they bested their long-time nemesis, a Tulsa-based club. “It was the culmination of a long process,” says Westmuckett. “And it
felt great.”

The next year, Nair left Oklahoma to accept a job at the Mayo Clinic in Minnesota. Still, he and Westmuckett kept in touch. In 2014, Nair returned to OMRF to become the vice president of technology ventures. In that role, he’d lead the foundation’s efforts to work with commercial partners to transform scientists’ discoveries into therapies and other products that could improve patients’ lives. To do that, he’d need the help of a scientist. In particular, Nair wanted someone he knew he could trust.

“I walked into Andrew’s lab at OMRF and said, ‘How would you like to come work for me?’” remembers Nair.

The proposal, while unexpected, intrigued the scientist. The job would tap many of the skills he’d developed working in OMRF’s labs: scientific writing, project management, research oversight. Still, says Westmuckett, “If it had been anybody other than Manu, I would not have said yes.”

That trust has paid off. In the four years since, the pair has patented numerous findings made in OMRF labs, then licensed those discoveries to biotechnology companies. They’ve also formed a series of research collaborations with industry partners that have advanced the work of OMRF researchers. Nair has taken the lead in working with the outside companies, while Westmuckett focuses on directing the projects within OMRF labs. “Our skillsets are complementary,” says Nair. “We make a great team.”

Westmuckett agrees. “I’ve enjoyed every moment of working with Manu.”

Although knee replacement surgery this past spring has put Westmuckett’s cricket career on ice, he’s found his way back out to the pitch as an umpire. In spite of nearly two decades with the Strikers—he’s the only person in club history to be honored with a lifetime membership—Westmuckett claims he can serve as an unbiased arbiter in matches against other squads. Even when his boss is bowling.