Mike Schuster celebrates an anniversary that once seemed unthinkable

“I’m sorry to bother you, but are you Mike Schuster?” 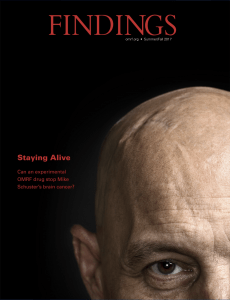 It was 2017, and the man who was, in fact, Mike Schuster sat in a waiting room at the OU Health Stephenson Cancer Center. He was there for a routine checkup when a woman approached him, clutching a copy of Findings magazine.

On the cover was a photo of Mike’s head, crowned by a scar reminiscent of baseball stitching. Alongside the photo, there was a question: “Can an experimental drug stop Mike Schuster’s brain cancer?”

The woman was there with her husband who, like Mike, had glioblastoma, one of the most aggressive forms of brain cancer. The couple read about Mike’s experience with OKN-007, an investigational drug born in the OMRF labs of Drs. Robert Floyd and Rheal Towner. They had come to Oklahoma City in search of a cure.

“I told her, ‘Nobody deserves to get cancer,’” remembers Mike. “‘But if you get it, you’re in the right place.’”
Mike’s diagnosis had come the day before Thanksgiving in 2015. Despite two surgeries, chemotherapy and radiation therapy, the cancer had grown back. So he decided to enroll in a clinical trial of OKN-007.

“I remember telling my doctor, ‘If you think it’s a good idea, I think it’s a good idea,’” says Mike. “Turns out, it was a good idea.”
Two years later, Mike was declared cancer-free. And this past November, he celebrated an anniversary he’d only dreamed possible, becoming one of just 5% of glioblastoma patients to survive five years from diagnosis.

In that half-decade, Mike saw his son Connor graduate from high school and college. Parker, his older son, earned his bachelor’s degree in mechanical engineering. Mike celebrated his 55th birthday on the heels of his grandmother’s 105th. And in August, Mike and his wife, Teresa, sat hand-in-hand and watched Parker get married.

“It’s impossible not to make mental notes. I’m always stepping back and thinking, ‘I can’t believe I’m here,’” says Mike, who now serves as a spokesman for a nonprofit that advances cancer research through clinical trials. “I’m incredibly fortunate.”

But recovery has tested him, too. Surgery left a wound on his head that’s resistant to healing and prone to infection, and therapy to help the surgical site has resulted in numerous brain bleeds. He can’t bend over or lift more than 10 pounds. Painful skin grafts, repeated staph infections, dozens of brain scans and daily medications are now part of his life. Ditto for a substantial hat collection.

Despite the challenges, the Schusters know the significance of the five-year mark. “We can’t take a blessing like reaching this milestone for granted,” says Teresa.
Biotechnology company Oblato has acquired the rights to OKN-007, which continues to undergo clinical testing. In addition to glioblastoma, the drug has shown promise in a rare form of pediatric brain cancer. In August, the FDA awarded OKN-007 a pair of designations that will provide special status and priority review for regulatory applications for the drug.

“Enthusiasm for OKN-007 is very high,” says OMRF’s Towner. “It’s going to be a drug that can provide real hope to patients. I anticipate we’ll see a lot more stories like Mike’s in the future.”

And the man from the waiting room? “I’m happy to say he’s still alive and doing well,” reports Mike.