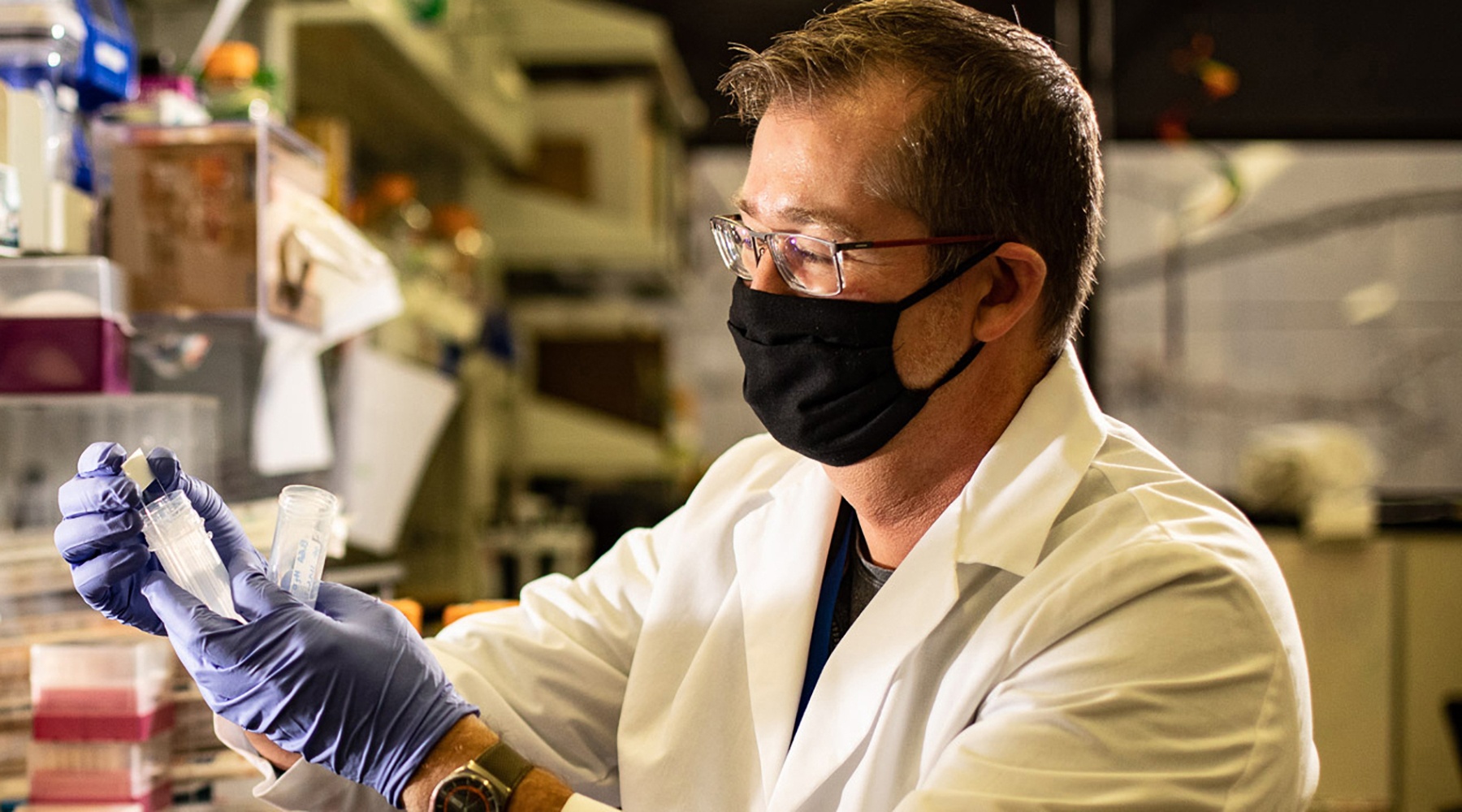 Home - Findings - Back to the Bench

When Dr. Dave Forsthoefel left his lab the evening of Friday, March 20, 2020, he sensed the enormity of the moment. With the first wave of Covid-19 breaking on Oklahoma, OMRF administration had instructed scientists to bring research operations to a halt. For Forsthoefel, who studies regeneration using tiny flatworms called planarians, that meant a week of scrambling. With the four other members of his laboratory, he organized and consolidated his worm colony, which would enable team members to come in periodically to feed the animals and keep them alive until it was safe to restart experiments.

“I looked around the lab and thought, ‘I don’t know when I’m going to come back,’” remembers Forsthoefel. “I knew we were doing the right thing by locking down, but when you’re chugging away on your research for 15 years, not working in the lab is not something that comes naturally.” Flatworms and microscopes don’t typically inspire emotions, but at that moment, he says, “I got choked up.”

During the next three months, OMRF existed in a state of suspended animation. To keep the heart of the foundation beating while others worked remotely, the foundation relied on a handful of employees who came to be known as the “skeleton crew”: technicians who maintained experimental animals (mice, worms, fruit flies, fish and frogs) and cell lines; facilities staff who tended to equipment and mechanical systems; and health care providers who saw patients in OMRF’s two clinics.

For Dr. Gabriel Pardo, director of OMRF’s Multiple Sclerosis Center of Excellence, the first step entailed remaking the clinical environment to ensure it was safe for patients and staff. Procuring sufficient amounts of personal protective equipment was key, as was reducing human density. “We switched roughly 60% of our patients to telemedicine,” he says. “That allowed us to prioritize those who actually needed to be seen in person” – patients experiencing new disease manifestations, those who required infusions with IV drugs, and patients also participating in research studies. That final group, Pardo says, proved critical, because “we were able to preserve the integrity of our clinical trials.”
As a result, he and his staff could continue to administer experimental medications to those living with MS. “That benefits our patients,” says Pardo. “And the more quickly we can complete clinical trials, the sooner new drugs can reach MS patients around the country.”

In June, OMRF loosened restrictions, enabling scientists and lab members to return onsite. “People were anxious to jump back,” says Dr. Xiao-Hong Sun, who’s been studying the immune system at OMRF since 1999. Like many of her fellow scientists, Sun had used the three months when the foundation was locked down to compile and analyze data from previous experiments, write papers and submit grant proposals. But when she and her lab got the green light to resume operations, “We were waiting at the door,” she says. In particular, she was eager to begin an experiment in OMRF’s flow cytometry facility, where she could analyze the characteristics of individual cells taken from mice she’d specially developed. “This isn’t something you could do at home.”

As with the rest of the world, the OMRF that Sun and her colleagues returned to wasn’t the same one they’d left pre-pandemic. Still, onsite restrictions – mask-wearing, physical distancing – haven’t put a major crimp in her work. “Each person in my laboratory has their own lab bay, so we’re able to socially distance,” she says. Without in-person meetings, she relies on Zoom teleconferences to interact with colleagues. “It’s not as good as seeing people face-to-face, but with a mask on, you can’t see their facial expressions anyway.”

On a weekly basis, several hundred OMRF scientific staff members and affiliated personnel have returned onsite, down from a pre-pandemic headcount of about 500. Those who come to OMRF stagger shifts and keep their time at the foundation to a minimum, performing whatever portions of their jobs that they can from home.

With only a handful of exceptions, OMRF’s administrative staff continues to work entirely remotely, and there’s not yet a timeline when they’ll be back at the foundation. “That will depend on widespread vaccination and viral levels dropping significantly in the general population,” says OMRF President Dr. Stephen Prescott. “Realistically, I don’t expect that to happen until well into 2021.”

In the meantime, OMRF has instituted a weekly Covid-19 testing program for all onsite personnel. “We’re still insisting that everyone wear masks and socially distance to decrease risk,” says Vice President of Clinical Affairs Dr. Judith James, who helped lead the testing initiative. “With community-based spread, testing adds another layer to help keep our workforce safe.”