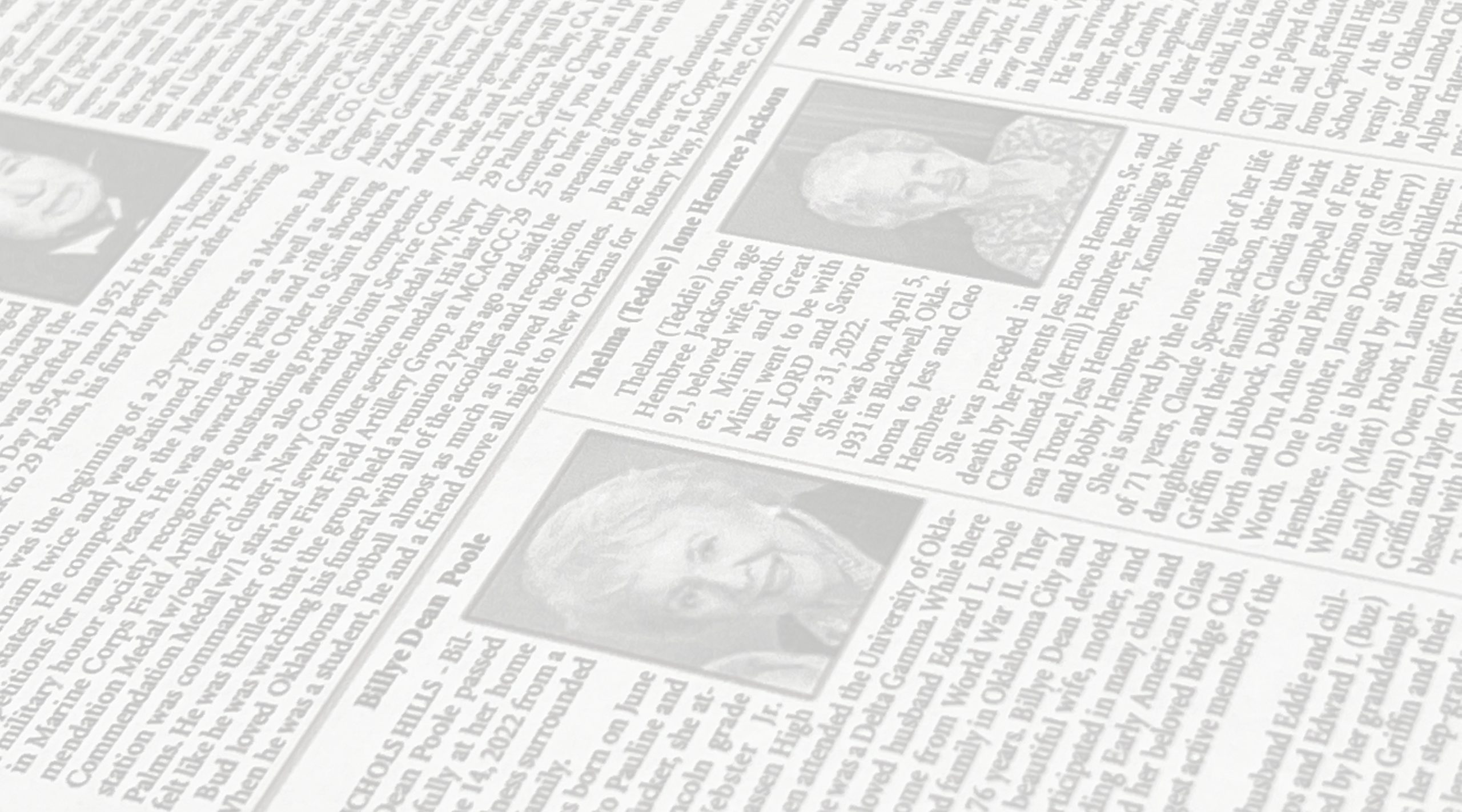 Home - On Your Health - When death teaches us about life

If I’m being honest, I probably didn’t have much business being at Jack’s funeral. And – being honest again – I wasn’t entirely sure why I went.

Jack was the father of one of my dear friends, Joe. Joe passed away several years ago. Since that time, I’ve mostly lost touch with his widow.

Occasionally, we’ve talked or exchanged texts and emails. Those interchanges have come with usual apologies for falling out of touch and promises to do better, to get together. But it hasn’t happened.

One recent Sunday, I was sitting on my bedroom floor, engaging in a favorite, time-honored ritual: reading the paper from cover to cover. When I reached the obituaries, as I often do, I remembered the words of former Oklahoman editor Ed Kelley: That’s where you find the best stories.

My eyes darted around the page, deciding where to start, when they came to rest on a familiar face: Jack’s.

He had a pleasant expression, a measured smile that fell a few degrees short of a full grin. He appeared a few years younger and a few pounds leaner than when I’d first met him.

The obituary told the tale of a long, good life. Service in two branches of the military, including a stint in the Korean War. A successful career in law and insurance. A marriage of more than a half-century to his high-school sweetheart, a union that yielded two sons who, in turn, brought him a quartet of grandchildren.

He loved them all dearly.

As it should, the obituary underscored the high points of his 94 years. Yet it only hinted at the heartbreaks. The loss of his wife to Alzheimer’s. The death of his son Joe at the age of 59, taken too early by metastatic melanoma.

The next morning dawned gray and wet, as days of funerals so often seem to. I arrived at the church a few minutes before the service was to begin and found a seat with no difficulty. When you lived almost a century, the lion’s share of your peers and friends left this earth before you did.

Jack’s remaining son stepped to the pulpit to deliver the eulogy. I had forgotten what a ringer he is for his late brother. And when he began speaking, it was as if I was listening to Joe. The timbre of his voice, the soft accent – even the slow, comical delivery was the same.

As his theme, he chose medical research. Or, more precisely, what scientists at a place like the Oklahoma Medical Research Foundation could learn from Jack.

You see, Jack wasn’t exactly a paragon of fitness. His favorite spot was his recliner, a preference mirrored in his ample frame. And he didn’t exactly mind his diet. If you had to reduce it to a single, hyphenated phrase, you’d probably choose “chicken-fried.”

Still, Jack had confounded just about every actuarial table. And until the final year or so of his life, when his decline became steep, he lived with gusto and joy.

In my pew, I thought, too, of Joe. I remembered our times together coaching youth soccer. Skiing with our families. Hoisting a few beers and trading silly, mostly true stories.

Those had been wonderful times. Yes, they were too brief. But they’d been rich and filled with laughter.

After the service, I visited with Joe’s kids, hugged his widow. “You didn’t have to come,” she said. I shrugged.

I thanked Joe’s brother for his speech. “You brought your dad back to life for a few minutes there,” I said. “And Joe too.”

As I drove to OMRF, I rolled the eulogy around in my head again. Joe’s brother had been half-joking about his father and medical research, but there was truth in that humor.

We’re taught to gauge life in years. In the lab and the clinic, we equate length with success. As in 94 (good), or 59 (not enough). Still, that overly simple formulation can miss the forest for the trees.

It shouldn’t be the years of life that matter most. It should be the life in those years. And by that measure, both Joe and Jack have plenty to teach us all.

Adam Cohen is OMRF’s senior vice president & general counsel. He can be reached at contact@omrf.org. Get On Your Health delivered to your inbox — sign up here.