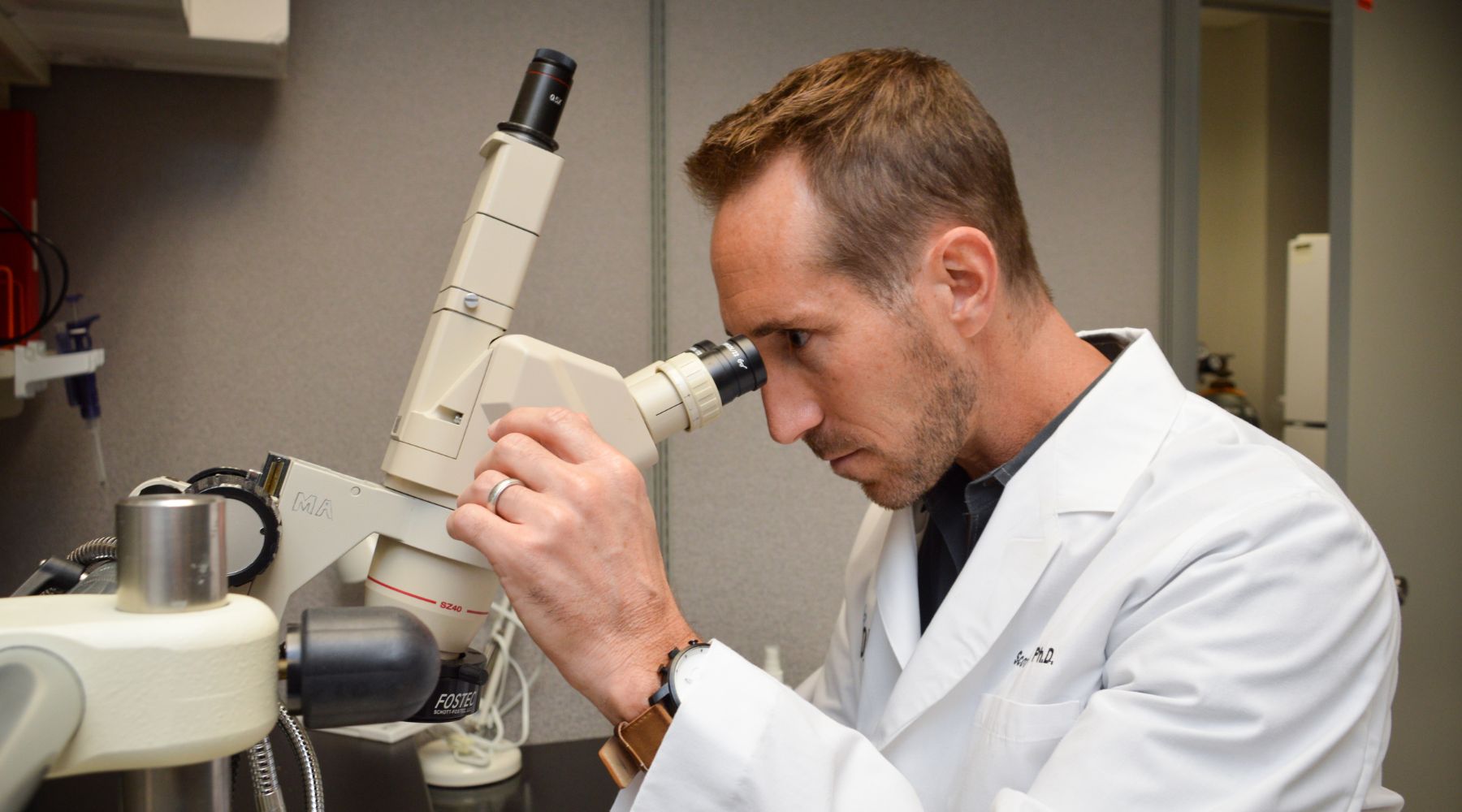 The National Eye Institute has awarded the Oklahoma Medical Research Foundation $2.8 million to study the connection between diet and a particular manifestation of multiple sclerosis.

The lab of OMRF scientist Scott Plafker, Ph.D., will test how a low-carbohydrate, high-fat ketogenic diet is beneficial in a mouse model of MS. The scientists are especially focused on the effects of this dietary approach on optic neuritis, a painful and often blinding inflammation of the optic nerve experienced by people with MS.

“‘Keto’ diets are essentially about reducing your intake of simple carbohydrates like bread, sugar, fast food and highly processed foods,” Plafker said. “We’re not talking about eliminating healthy carbohydrates rich in fiber, like nuts and beans and vegetables.”

MS is an autoimmune disease in which the body’s immune system attacks healthy tissue, including myelin, the protective layer that covers nerves throughout the body. Myelin loss damages the nervous system’s ability to carry signals to and from the brain, causing a wide range of symptoms.

One symptom is optic neuritis. This temporary blindness occurs when the myelin protecting the optic nerve, which carries visual information to the brain, is stripped away. Vision returns when the MS flare ends; however, repeated flare-ups can result in permanent blindness.

In a previous study, Plafker examined the effects of a drug on optic neuritis and found that only two of the 52 patients who stayed on the medication experienced an MS flare-up while taking it. However, more than 200 patients in that four-year study discontinued the treatment either because of adverse side effects or a perception that the drug wasn’t working.

“That’s a big reason we believe dietary interventions may be a more promising and easier-to-tolerate approach to treating autoimmune disorders,” Plafker said.

His current study builds on previous work in a mouse model of MS showing that a keto diet eliminated optic neuritis as well as the motor or movement symptoms of MS. Plafker’s team now wants to determine exactly how this dietary intervention works.

“One goal of this grant is to figure out how the diet produces the desired results,” he said. “A keto diet may be too difficult for some people to adhere to, but maybe there’s a workaround, like taking a supplement that replaces certain fats from the diet.”

While this grant focuses on one symptom of MS, Plafker is among numerous scientists who believe there is a direct correlation between the rise in autoimmune disease and a “Western diet” consisting of excessive carbs, sugar, salt and processed foods.

“Many of the chronic diseases we’re seeing are either induced or worsened by lifestyle,” he said. “If they were purely genetic, their prevalence wouldn’t be skyrocketing.”

The five-year grant, R01 EY033782-01, is funded through the NEI, part of the National Institutes of Health.