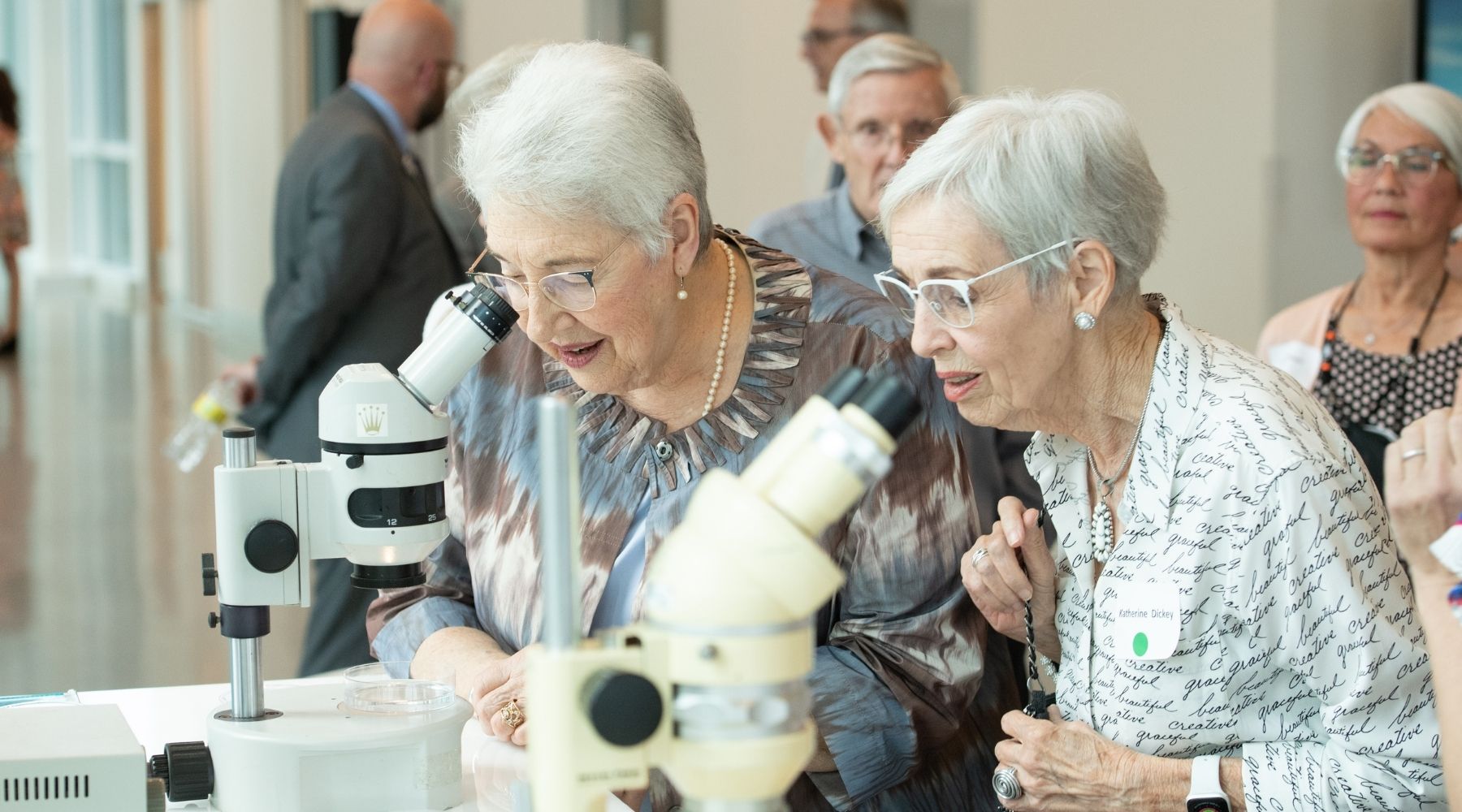 About 100 Oklahomans got a glimpse behind the scientific curtain this week as the Oklahoma Medical Research Foundation’s way of thanking them for their consistent support.

OMRF President Andrew Weyrich, Ph.D., welcomed members of the Loyal Donors Society – those who have given financial support for at least five straight years – by invoking the foundation’s origins: “What’s unique about this place, and part of the reason I came here, is that it was built by Oklahomans who had a dream 75 years ago.”

“I tell people that we’re like the Green Bay Packers,” Weyrich said, referring to America’s only publicly-owned professional sports team. “Everyone’s a stakeholder at OMRF. This is your place.”

The May 10 event, held in the OMRF Research Tower, was one in a series of Loyal Donor Society gatherings taking place in communities statewide.

For Katherine Dickey of Oklahoma City, it was a chance to see how OMRF scientists are using her gifts. Dickey said she was invited to tour OMRF in 2019 but was unavailable, and then Covid-19 prevented onsite visits. So when the opportunity arose this time, Dickey vowed not to let it slip away.

“I thought it was wonderful,” she said of the lab demonstrations.

“We lived in Weatherford, and I wanted to go really badly, but my father said, ‘Oh, no, Meredith, you can’t go to Oklahoma City by yourself.’ And that was the end of it, but I’ve always appreciated the research that goes on here.”

The event also attracted numerous current and former OMRF employees who are part of the Loyal Donors Society.

Craig Wasson, a 38-year employee and senior technical specialist in the Arthritis and Clinical Immunology Research Program, allocates his gifts to the Reichlin Fellowship Fund to honor his former boss. Morris Reichlin, M.D., was such a groundbreaking physician-scientist that the broad screening test used to detect lupus is named for him – the Reichlin Profile. He later served as OMRF’s first vice president of research.

Wasson recalls Reichlin overseeing a two-year fellowship program with clinical and research components for practicing physicians. After Reichlin died in 2018, OMRF established an endowment in his name.

“I remember one particular summer when Dr. Reichlin’s lab was packed with trainees. I got to help them with their lab project,” Wasson said. “Those doctors have been in practice for going on 20 years now, which tells you just how vital his fellowship was.”

Donors Robert and Lura Fabian of Edmond, whose support dates to 1995, said the demonstrations helped them better understand that scientists play the long game.

“You really have to be persistent to be a researcher,” Robert Fabian said. “You might have to stick with something for five years or more to make any progress, and I’m constantly amazed that there are people willing to invest their time for that.”

It was the generosity of Oklahomans like those who attended this week’s event that first made OMRF possible and later rise to become a world-renowned research institution, said Vice President of Development Penny Voss.

“These donors are essential to our mission of finding discoveries that lead to longer, healthier lives,” Voss said. “Events like this allow us to show our appreciation and help them understand what we do just a little bit better.”