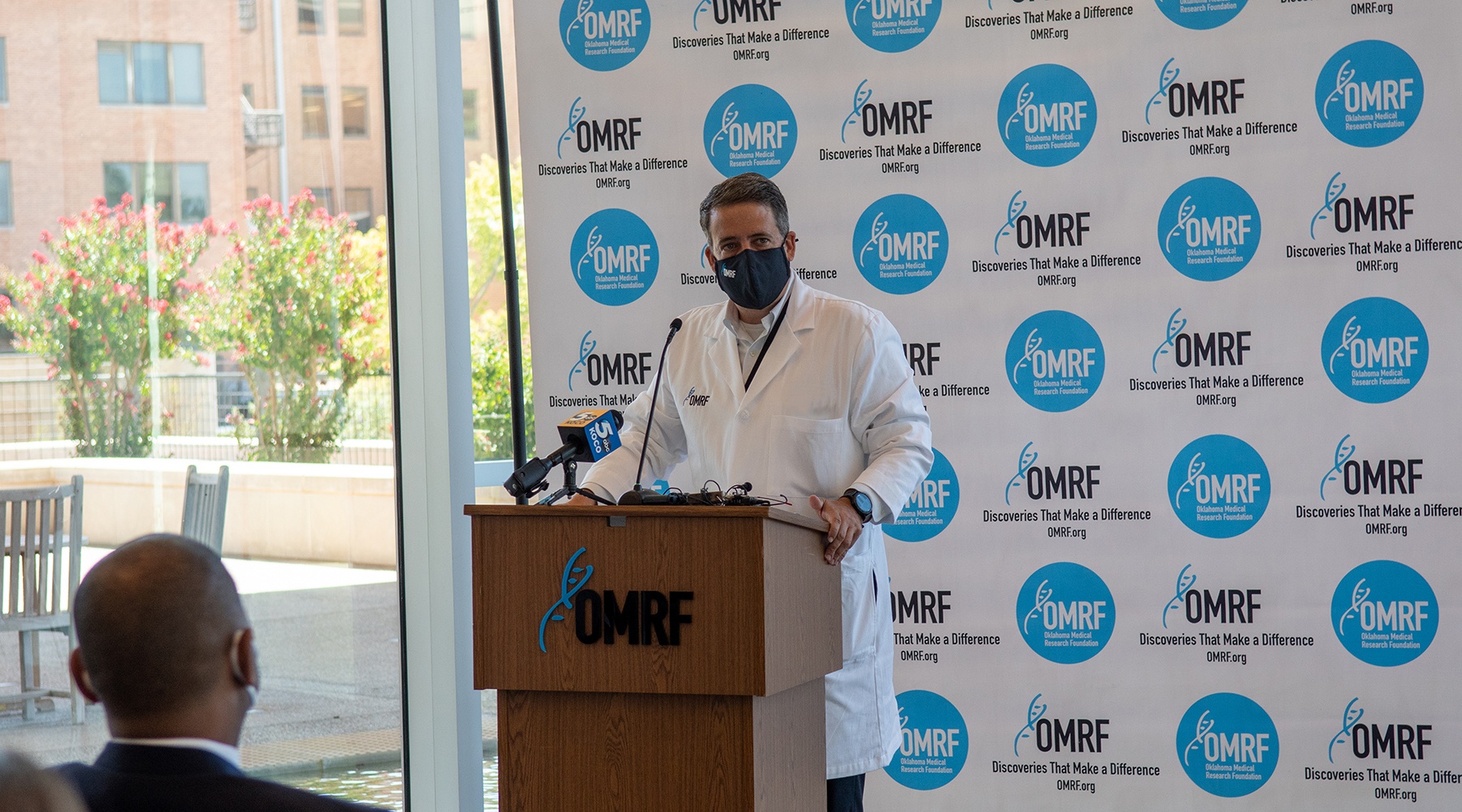 The amount of data generated in biomedical research is expanding at an unprecedented pace. OMRF’s biomedical data center will bring greater cutting-edge analytic knowledge and support to hundreds of scientists at OMRF and across Oklahoma working to understand and treat conditions such as cancer, lupus, stroke and heart disease.

“OMRF has been involved in groundbreaking research for the past 75 years,” said Inhofe. “Since its founding, OMRF’s scientists’ discoveries have yielded hundreds of medical advancements used to improve — and even save — the lives of Oklahomans and individuals worldwide. We want to keep this research going — and to expand it. I am happy to support dedicated funding to help OMRF establish Oklahoma’s first Center for Biomedical Data Sciences.”

OMRF scientist Bill Freeman, Ph.D., is studying how to prevent age-related diseases such as Alzheimer’s, Parkinson’s and dementia. Also a research scientist at the Oklahoma City Veterans Affairs Medical Center, a single experiment in Freeman’s lab can generate a data set equivalent to a spreadsheet of 200 million columns and 3 billion rows.

“To make discoveries from these massive amounts of data, we need extensive computing resources, but also talented mathematicians, computer scientists and biologists,” said Freeman, a member of the committee of OMRF scientists developing the center. “The center is an investment in high-performance computing infrastructure as well as in recruiting, training and retaining talented data scientists right here in Oklahoma.”

The center will work with Oklahoma’s regional and research-based universities like Langston University (LU) to build partnerships and develop homegrown talent. This summer, OMRF welcomed its inaugural class of Langston Biomedical Research Scholars. Developed in partnership with LU, one aim of the program is to retain top scientific talent in Oklahoma.

“The demand for data scientists has never been higher,” said Freeman. “We want to provide the opportunities that will keep Oklahoma’s best and brightest in the state and at OMRF.”

The center will also serve as a hub for collaboration among scientists at OMRF and with partner research institutions in Oklahoma, including LU, OKC VA Medical Center, Oklahoma State University, OU Health and the University of Oklahoma.

Two data scientists will join OMRF in the fall as the center’s first staff members. The foundation is actively recruiting a center director who will lead its strategic development.

If awarded, OMRF will use the federal funds to renovate an underutilized wing of the Oklahoma City-based nonprofit biomedical research institute to house the world-class center. Additional funding for the center will come from private gifts, demonstrating OMRF’s commitment to using 100% of donations for research.

“Sen. Inhofe has a long-standing commitment to securing critical research funding for Oklahoma,” said OMRF Interim President Adam Cohen. “His decades of support for OMRF’s scientists have yielded discoveries that will change lives.”