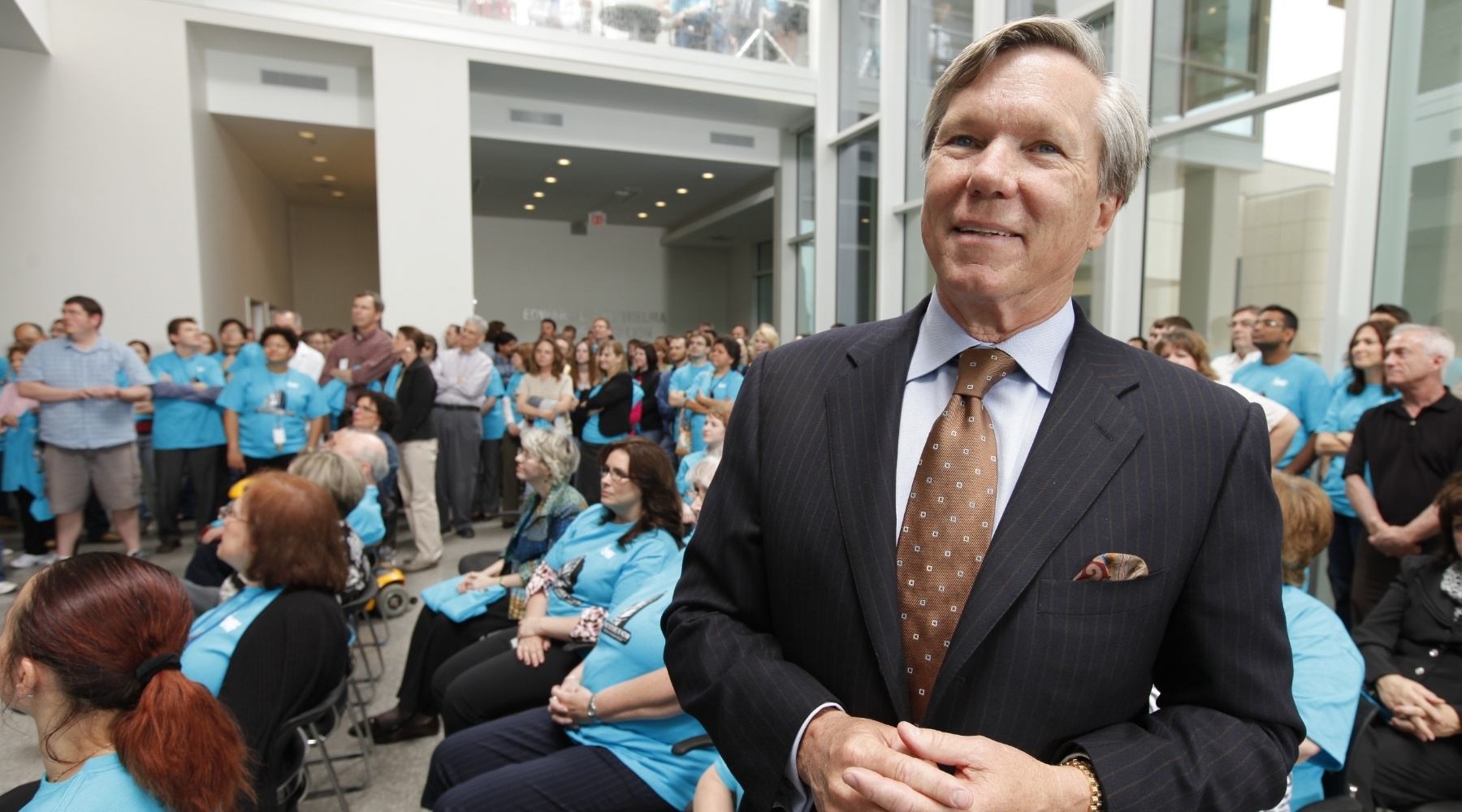 Home - On Your Health - Remembering Dr. Steve Prescott, my mentor

Moments that change your life can sneak up on you. That was the case when I first met Dr. Steve Prescott.

I’d been working at the Oklahoma Medical Research Foundation for 3½ years or so when someone asked me to interview a candidate to be OMRF’s next president. That was pretty tall cotton for me. I felt, not surprisingly, quite nervous when I sat down with Dr. Prescott.

I don’t recall what we actually discussed, other than a shared love of Diet Cokes. But, as you can guess from a conversation whose most memorable aspect involved soft drinks, it put me at ease.

And that was Steve. 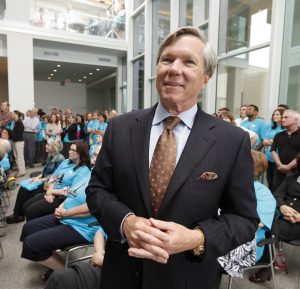 He was a big-deal medical researcher who led a big-deal cancer center in Utah. He could’ve behaved like a big deal. But here he was, just-folksing it with me.

About three minutes into our conversation, I realized he would be my next boss.

Figuring out a working relationship can be a tricky thing. Because, like each of us, bosses are human. They come with their own quirks and foibles.

Some lead quietly, while others seek every opportunity to demonstrate they’re the smartest people in the room. Tempers. Senses of humor. Egos. All have them, but in wildly different proportions.

I scheduled regular meetings and arrived at the appointed times, armed with a Santa’s list of items to discuss. On even the most mundane issues, I awaited his yea or nay before moving forward.

Steve tolerated it like a champ. No question proved too picayune to discuss. He displayed a willingness to step into the weeds with me. But over time, I figured something out. I could find my way through on my own. And Steve was perfectly happy to let me.

Having worked for micromanagers in the past, this newfound freedom felt strange. When I made a misstep, I’d await the guillotine. But it never fell.

It’s not that Steve tolerated mediocrity. It’s that he trusted his managers. He chose people carefully, then gave them room to run.

That vote of confidence, the knowledge that my boss had my back, made me work harder than I ever had before. Steve was generous in giving praise and credit, his critiques gentle and to the point. 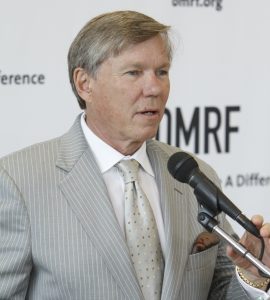 Over time, I like to think I grew into the employee Steve had once imagined I could become.

Steve, of course, wasn’t perfect. He didn’t suffer fools gladly, and his temper sometimes got the better of him. And because he was so quick on his feet, he rarely felt the need to prepare for a presentation at the level I would have liked.

“Do we need to do a run-through?” I’d ask nervously the day before a big speech. He’d glance at the text for a minute, maybe two, then hand it back. “Nah. I’ve got it.”

He wouldn’t use the exact words I’d penned; he’d put his own spin on things. There might be a stumble or two along the way. But he’d always deliver. And that genuineness – that really was him speaking, not regurgitating some flack’s hackneyed prose – shined through.

“Dr. Prescott made a lasting impression on me from the moment he walked in the door for an interview,” said Jenyann Roig, the executive producer of morning news at KOCO News 5 in Oklahoma City, where he appeared often as an expert. “He was personable and humble. He became one of my favorite guests.”

In 2017, six years after he’d undergone treatment for prostate cancer, he developed an aggressive form of urothelial cancer. At that moment, he made a decision that would define the final years of his life: He shared everything. 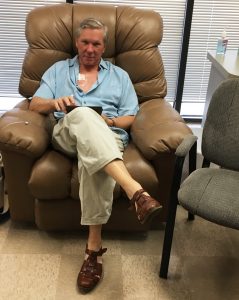 Not just with friends and family, but with OMRF staff, board members and donors, along with the general public. That openness cannot have been easy. After all, he was talking about intimate details of his life, his body and his health. And he acknowledged that the very act of bringing his plight into the open might make some people uncomfortable.

He lived through cycles of treatments and recovery, days that alternated between hope and dread. Some of the most emotionally trying experiences, he explained to me, were the periodic scans he underwent.

It was, he said, “like having someone lead you into a prison yard and hand you a cigarette.” Then, he said, “You’re blindfolded and lined up against a wall. You stand there, just waiting for a bullet.” But, instead, “a voice says, ‘Not today.’”

Until one day, the voice said something it else.

That moment came deep into the pandemic, where he’d emerged as one of our state’s leading medical voices, offering clear-headed advice and guidance in a time marked by misinformation and fear. “I have never met Dr. Prescott, but I count him as part of my support team during 2020,” said Lyla Rousseau. “His words became a lifeline, a trustworthy source of information, and sometimes a lighthearted look at a very confusing world.” 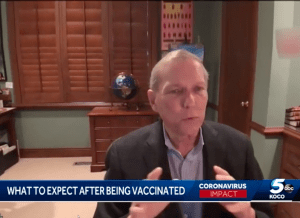 Even as the disease spread to his spine and lungs, “through chemo and cancer, Dr. P made sure Oklahomans knew the latest on the pandemic,” remembered KOCO’s Roig. “He never let his health get in the way of his duty.”

Truth is, he loved it. In fact, I think it helped distract him from his plight. If he had his eye on the pandemic, he had no time to worry about himself.

Indeed, as a physician, he was much happier worrying about others. He helped countless people understand their diagnoses and navigate the care system when they or a loved one confronted a health crisis. “Steve was instrumental in helping me through my own journey with cancer,” remembered one friend. “When my father was in the hospital after a triple bypass surgery, Dr. Prescott called me personally and gave me reassurance during an extremely scary time,” recalled an OMRF employee.

I sat with Steve last week, a few hours before he passed away on May 28. He was struggling mightily, and it took all his energy to get out a few words. “How,” he said. He took a few breaths and swallowed. “Are.” Cough. “Things?”

I gave him a little update about OMRF. He gestured toward his water glass, which I held for him while he sipped through a straw. It took him three or four swallows to get it down. Then he coughed a bit. “You’ll … be … okay,” he said.

Yes, we will, I told him. Thanks to you, Dr. Prescott.

When our visit came to an end, I wanted to say goodbye, to tell him all that he’d meant to me. But I couldn’t quite bring myself to. It felt too final. So, I just squeezed his hand, looked into his eyes, and told him I’d see him soon.

Leave a remembrance for the Prescott family >>