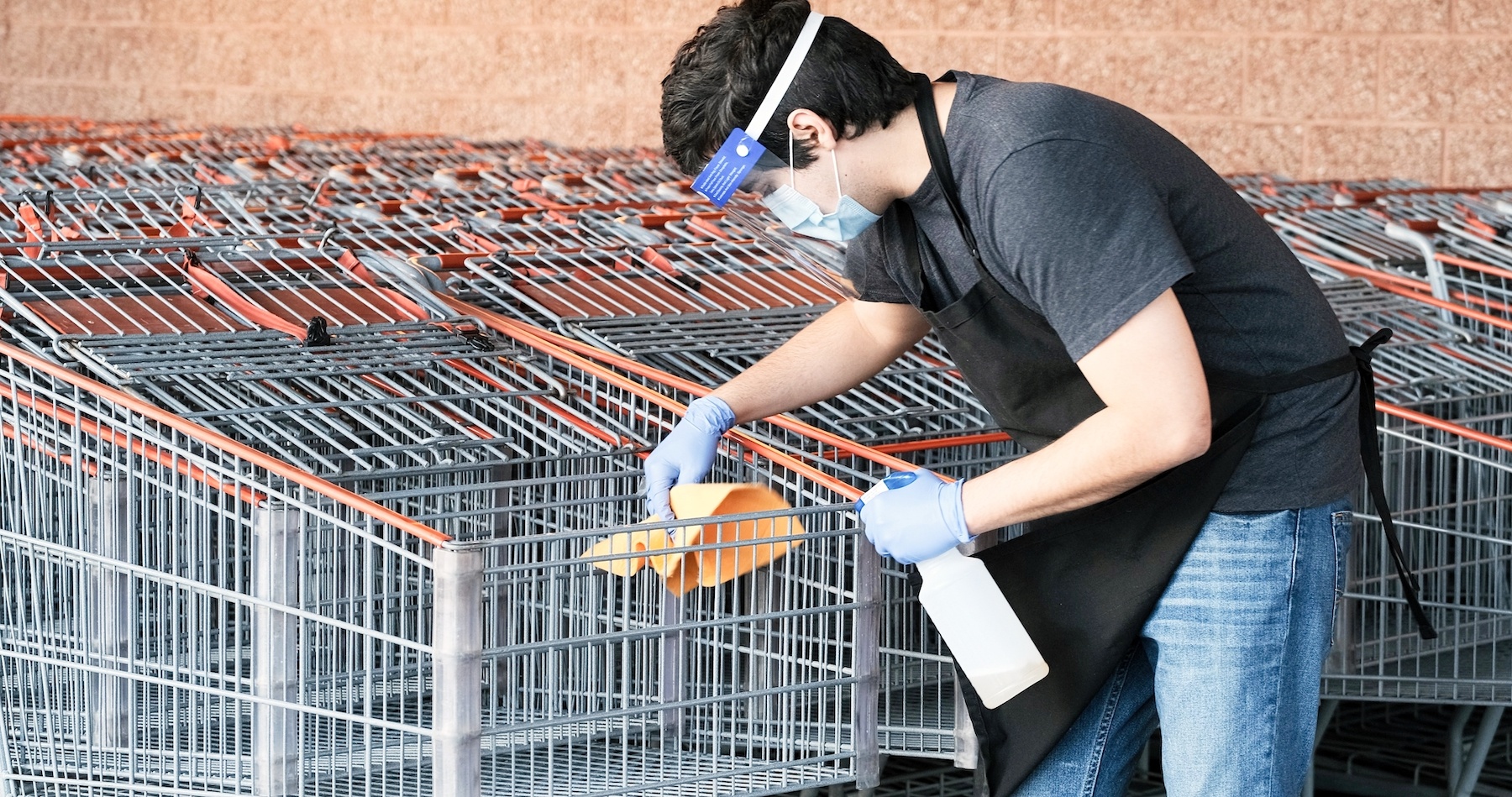 Home - COVID-19 News - Why are we still wiping down surfaces?

Have you gone into a store lately? If so, you’ve almost certainly been greeted by: On television, airlines try to assure consumers that it’s safe to travel by showing an army of workers sanitizing tray tables and seats. Ditto for hotel and casino ads, which use clouds of disinfectants as a shorthand for a virus-free environment.

There’s nothing per se wrong with disinfecting high-touch surfaces. And at the outset of the pandemic, when we learned that SARS-CoV-2 could survive outside the body longer than most viruses, it made sense to expend significant time, effort and money trying to kill invisible pathogens that might be lurking on anything we touched.

But we now know that surfaces are, at best, extremely rare vectors for infection. By far the main means of transmission is the air, where one person breathes in a cloud of viral particles that had been exhaled by an infected individual. The Centers for Disease Control has updated its “How Covid-19 Spreads” webpage to say that “spread from touching surfaces is not thought to be a common way” people are being infected. Still, when we hear about studies such as one published in October that detected the virus on surfaces such as stainless steel and glass after 28 days, it’s hard not to reach for a Clorox wipe.

However, in the vast majority of situations, these studies don’t translate to the world we actually live in. They’re conducted in laboratories under tightly controlled experimental parameters, shielded from the airflow, heat and light that would, under normal conditions, quickly weaken or destroy the virus.

Much is also lost in the translation of these studies when reported by popular news outlets or social media. While it’s true that research has shown the ability of some portion of the virus to survive for long periods of time, what it does not show is that this remnant is capable of causing infection. And there’s a sea of difference between the ability of a single viral particle to survive and the ability of that particle to cross our mucus membrane, infect our cells, and cause those cells to begin producing copies of the virus.

While the precise number of viral particles needed to cause infection is still not known, scientists believe it’s in the hundreds. The likelihood that you’d pick up this number of infectious viral particles from the handle of a grocery cart or shopping basket is extremely low.

That’s not to say that it can’t happen. But as an official at the National Institute for Allergy and Infectious Diseases recently said, “It’s like standing in the middle of a busy freeway with traffic all around you and asking, ‘What’s the chance I’m going to get hit by a meteor?’ Now there’s a chance, but it’s pretty low, and don’t you have other better things to worry about?”

And, indeed, that’s the problem with all of this ritual wiping down: It takes our eye off the real danger.

As we are seeing with each new daily record we set for infections, hospitalizations and deaths, we have entered a perilous period, where we are congregating indoors with vaccines yet to arrive. And what’s driving these frightening spikes is airborne transmission caused by people sharing the same space and breathing the same air for sustained periods of time. While prominent displays of surface cleaning protocols seem reassuring, they can create a false sense of security. Wiping down registers between customers and other acts of “hygiene theater,” as The Atlantic Magazine has called it, can lead us to let our guard down. If we feel safe, we may linger too long in indoor spaces we really should be passing through as quickly as possible – or avoiding altogether.

As far as surface transmission is concerned, any risk can be mitigated by keeping hands away from the face and washing hands thoroughly with soap and water whenever you’ve been outside the home or interacted with others.

But make no mistake about it. When it comes to controlling the virus this winter, mask-wearing, physical distancing, avoiding travel, and keeping interactions with others to a minimum will be key. Everything else is just looking out for meteors while standing in the middle of a busy freeway.