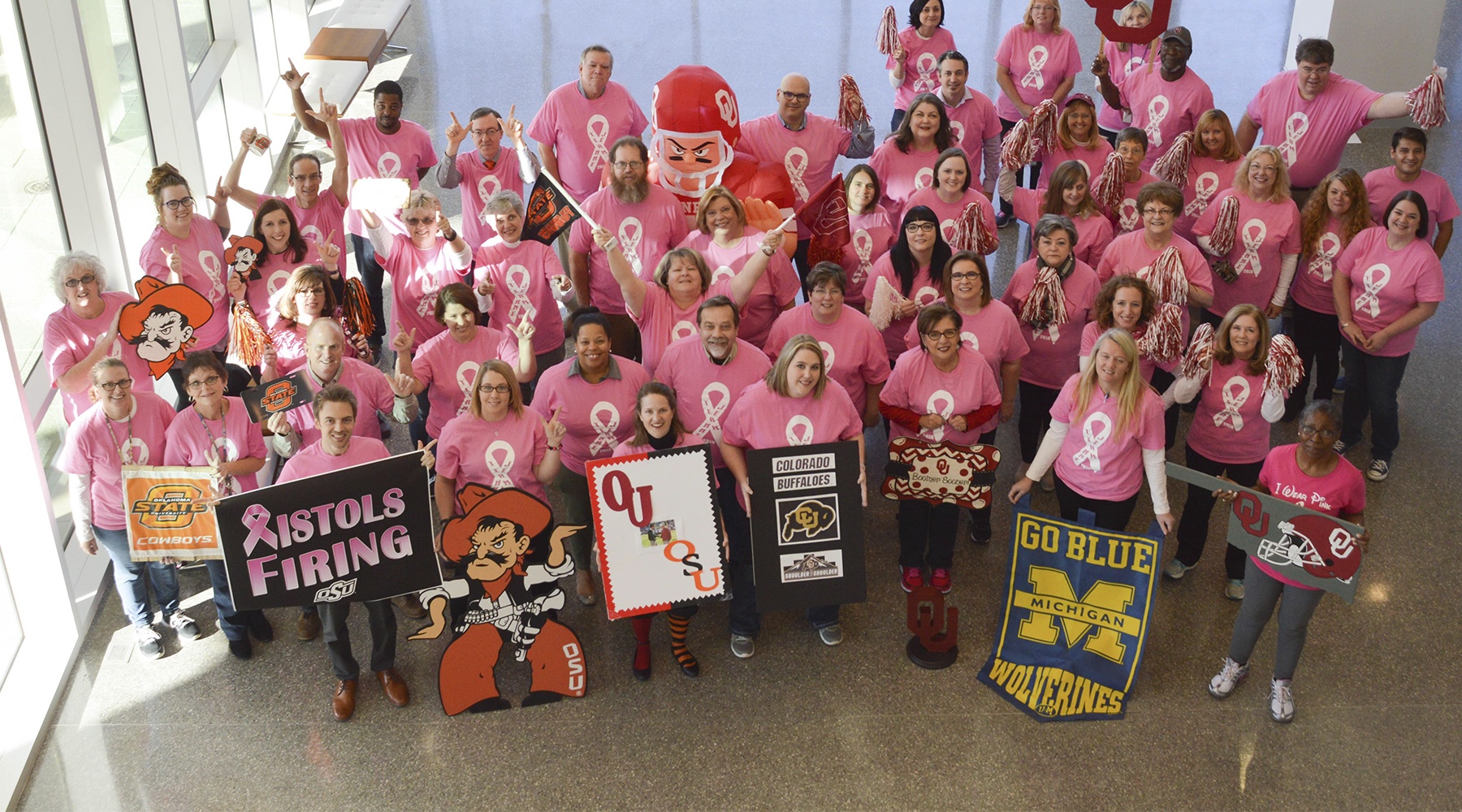 The prospect of retirement was looking pretty good to Jeanne Fowler. After 45 years working in OMRF’s accounting department, she was counting down the months until she’d spend her days puttering in the garden and taking strolls with her husband, Ed, and their dog.

Then she received a diagnosis of breast cancer.

“Stunned is the only way I can describe it,” she says. “The day I got the news was the worst day of my life. The second worst was the day I had to shave my head. My hairdresser and I cried together.”

Fowler’s hair fell victim to chemotherapy and radiation treatments her doctors prescribed following a lumpectomy. Although the treatments would exact a considerable toll on her body, they came with an unexpected silver lining.

During her first chemotherapy session, Fowler’s phone buzzed. When she clicked on the text message, she discovered a photo of 20 coworkers, all wearing pink “Team Jeanne” t-shirts. Even with an I.V. delivering cancer-killing chemicals tethered to her arm, Fowler found herself smiling.

“Jeanne was at her lowest point on that first day of chemo,” says Janet Sharpe, a senior accounting clerk at OMRF who, years earlier, had received her own cancer diagnosis. “She needed a big dose of positivity, and we were determined to give it to her.”

With Sharpe leading the charge, the effort morphed into an OMRF-wide movement. Sharpe canvassed the hallways, wrangling an ever-growing circle of OMRFers for group and individual photos. Then, on treatment days, dozens of images of pink-clad, smiling colleagues would flood Fowler’s phone.

As word spread, more than 100 people bought t-shirts and joined the effort. To keep Fowler smiling, Sharpe had the group take the form of a giant pink ribbon for one photo. For another, she organized a special Bedlam-themed shot for the annual University of Oklahoma-Oklahoma State University football clash.

“Heck, I didn’t even know everyone in Team Jeanne personally, but there they were in the photos, smiling and cheering me on,” Fowler says. “Somehow, they heard my story and came on board.”

Fowler retired from full-time employment in 2017. But she still comes to OMRF occasionally to help out on projects (and go for lunchtime walks with her long-time coworkers).

With her treatments finished, Fowler’s hair has grown back. And her doctors have pronounced her cancer-free. Still, Fowler remains understandably cautious. “I’ll probably never stop worrying about it,” she says. “Now, I’ll focus on making the five-year mark.”

Although the shadow of cancer may continue to lurk, for Fowler, the disease has been eclipsed by the response it triggered. “I’m almost embarrassed by all the love and support I’ve had. I feel like the luckiest person in the world.”