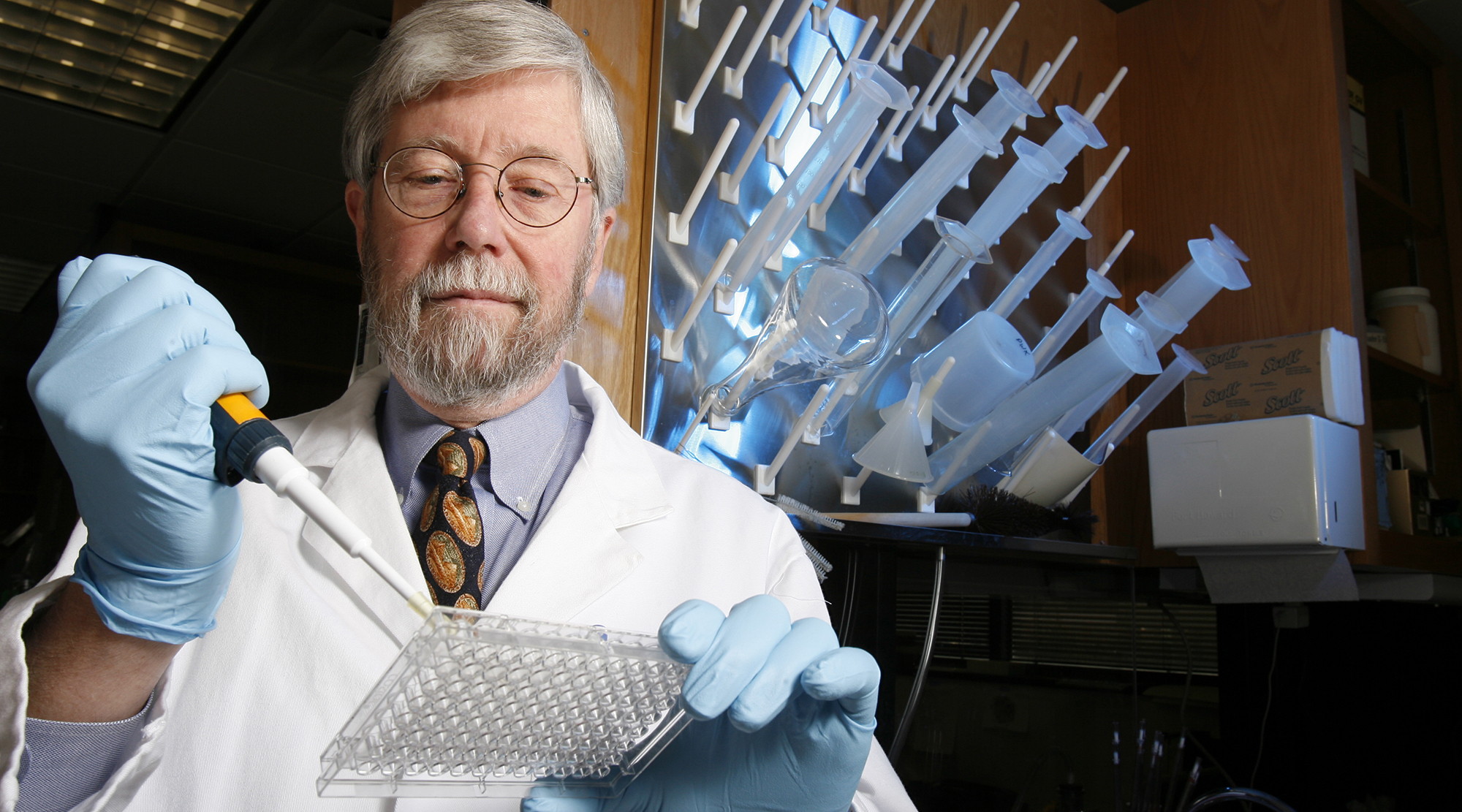 Dr. Paul Kincade can’t recall a more exciting time for stem cell research. And with a 50-year career as a stem cell biologist, he has a vantage point that’s second to none.

Earlier this year, after more than three decades heading a lab and research program at OMRF, Kincade retired as the foundation’s vice president of research. But he continues to serve as scientific director of the Oklahoma Center for Adult Stem Cell Research (OCASCR), which he helped to found in 2010. Funded by the Oklahoma Tobacco Settlement Endowment Trust, OCASCR represents a close collaboration among Oklahoma State University, the University of Oklahoma Health Sciences Center and OMRF. The organization has twin missions: to support adult stem-cell research in the state and to promote public understanding of the field.

Kincade recently attended the 2017 annual meeting of the International Society for Stem Cell Research, where stem cell researchers from around the world shared the latest advances in the field. Afterward, he sat down with Findings.

There’s been a lot of excitement and discussion over the past 20 years or so about the promise of stem cells for developing new treatments. Give us a quick reminder what a stem cell is.

It’s a cell that can self-renew. When it divides, it can either make an exact copy of itself or become another type of cell with a more specialized function, like a muscle cell, a blood cell or a brain cell.

How could stem cells be harnessed to develop new treatments for disease?

As one example, you can now take a sample of blood or skin, engineer it to make stem cells, then reprogram those cells to make any type of cell in a patient’s body. The science is progressing to the point that we now have the capacity to make what are basically replacement parts for any damaged cell in the body.

There was a big debate surrounding the use of so-called embryonic stem cells, but I haven’t heard much about that topic in recent years. How come?

Because of an extraordinary breakthrough [which won a Nobel Prize in 2012]. We have over 500 cell types in the body, and they normally behave themselves. They stay what they are. That’s good, because you wouldn’t like for the brain to start making blood cells. But scientists discovered this stability can be taken away, that the cells can become flexible. Today, all you need is an “adult” cell—a skin or blood sample from a research volunteer or patient—to make any cell you want. So there’s really not much need for embryonic stem cells anymore. To my knowledge, all of the stem cell research in Oklahoma has used adult cells.

Stem cells were first talked about as potential treatments for nearly every condition imaginable. What are the most promising targets today?

Bone marrow transplantation has been used for leukemia and blood cancers for a long time, and that remains the only thing that’s standard of care. But that’s going to change. Animal studies and early-stage human trials are showing promise in macular degeneration. We’re seeing progress in treating burns, and we also believe it’s going to be possible to treat spinal cord injuries. There have been exciting advances in Parkinson’s and heart disease, too.

Why these particular conditions?

The ones that will be most amenable to stem cell treatments are conditions affecting one cell type. The idea is that we can make that one type of cell from stem cells in large numbers, then transplant them into a patient. But that approach won’t work in diseases affecting multiple cell types.

Most stem cell therapies are still in experimental phases. What hurdles still remain for them?

Right now, the process is too time-consuming and expensive to work on a large scale. We need to figure out ways to do it much more quickly and cheaply. In early tests, scientists were re-engineering patients’ own cells. But for the treatments to become standard of care, we probably can’t do this on an individual basis. We’ll have to prepare banks of stem cells that include suitable matches between donor and patient. And we’ll have to overcome the problem of cancer-causing mutations that can arise when we reprogram cells. We already know these treatments are possible, but it’s going to require patience to make them safe and practical.

What are your biggest concerns about the future of stem-cell-based treatments?

Bad science. The thing that kills a field is something that’s done before it’s been carefully vetted. Gene therapy is a perfect example.

Scientists tried to cure a teenage patient suffering from a mild form of a metabolic disease, and he ended up dying from unanticipated side effects of the treatment.

Has the potential of stem cells been overhyped?

Yes. And misunderstood. The public and even a lot of physicians didn’t understand that. There isn’t sufficient evidence to suggest that a lot of so-called stem cell treatments should work.

Yes, I’ve noticed ads for clinics offering “stem cell therapy” for a variety of illnesses. Is this a viable option for people suffering from conditions like arthritis, multiple sclerosis and neurological diseases?

There are more than 500 such clinics in the U.S., but there’s little reason to believe their treatments are effective. They haven’t been subject to rigorous scientific analysis.

How do they work?

At the moment, the FDA allows them to operate if they take a cell out of your body and put it back in without much manipulation. They use phrases like “may benefit” or refer to how many patients they’ve treated—with no reference to whether those treatments succeeded. It’s not false advertising per se. But to someone who’s desperate, you hear what you want to hear.

But people swear by these treatments…

Yes, you have athletes claiming they’ve gotten relief from injuries or joint problems. Who knows? There may be some benefits. In a lot of conditions, especially ones involving chronic pain, the placebo effect is 45 or 50 percent. Diseases like MS wax and wane, so after a treatment, you may just get better anyway.

How have stem cells impacted research?

They let scientists model diseases in a test tube. You can study a cell that’s misbehaving and figure out exactly what is causing that disease. Then you can design drugs to treat it or screen thousands of compounds, many of which have been used as drugs for something else. This is a rapid way to develop new treatments. These are things you could never do in a patient.

Would you have imagined this 50 years ago?

No way. The pace of discoveries is what astonishes me.

How about Oklahoma—what’s happening here?

Before OCASCR, Oklahoma only had a couple of researchers who had stem cell grants. Thanks to the vision and support of TSET (the Oklahoma Tobacco Settlement and Endowment Trust), we now have about 40 scientists whose work pertains to stem cells. They’re working on a broad spectrum of problems: leukemia, blindness, respiratory diseases, diabetes and more. In seven years of operation, OCASCR has awarded 100 grants to researchers to support this work, and we’ve purchased 29 pieces of scientific equipment for shared use by stem cell researchers at institutions throughout Oklahoma. We’ve helped recruit 10 new scientists to the state. Our goal was to get Oklahoma scientists to start thinking about and working in this hot area. I think we’re succeeding.