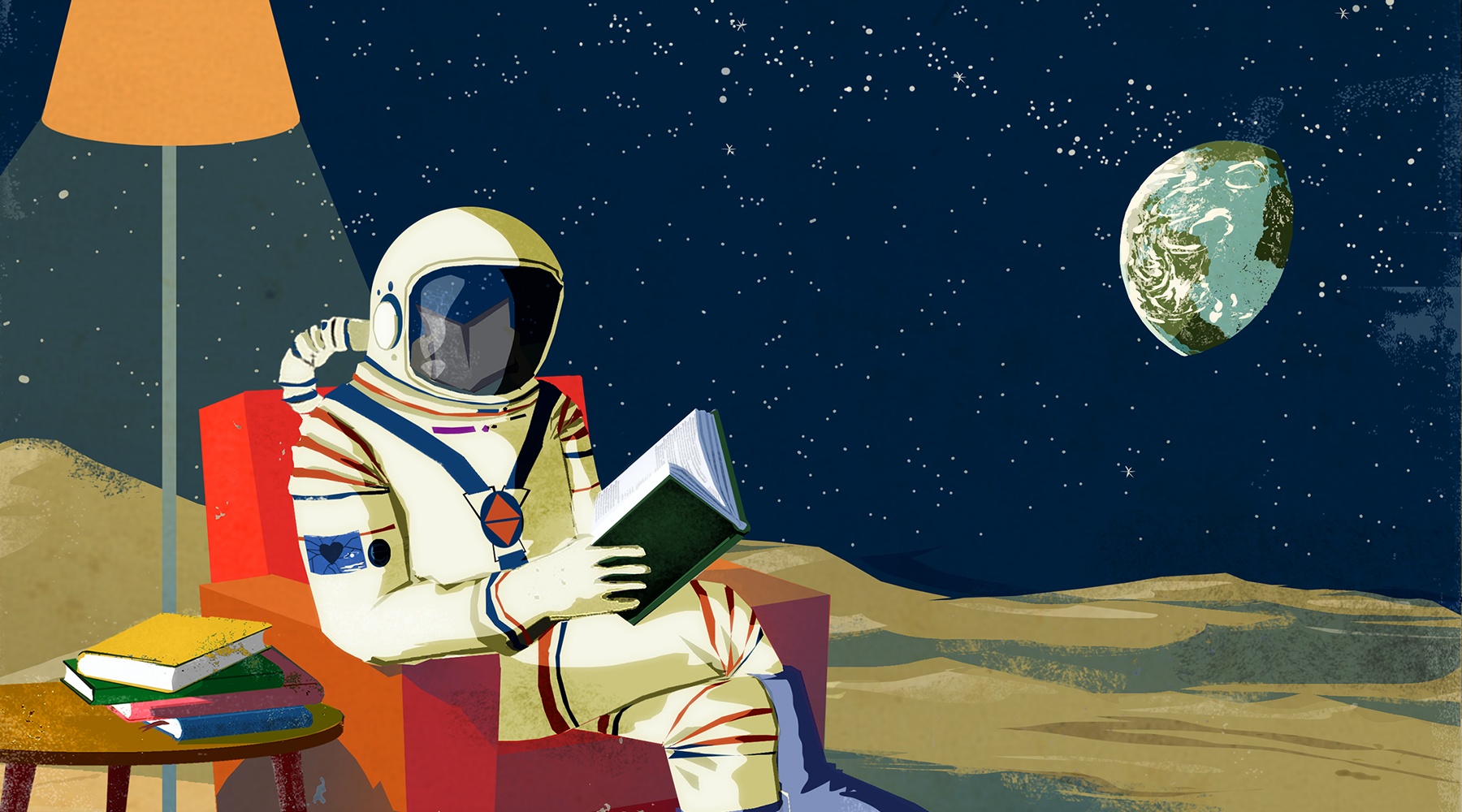 Home - Findings - Out of This World

The earth, Don Gibson realized, was shaking. He had traveled to Florida to watch the space shuttle Discovery take off. The shuttle stood 10 stories tall, roughly the size of George Washington’s head at Mount Rushmore stacked atop Thomas Jefferson’s. Still, as it stood on the launch pad at the Kennedy Space Center in Florida that morning in June 1985, it looked a bit like an outsized paper airplane.

The shuttle piggybacked on a silo-sized rocket, a hulking, bullet-shaped canister filled with liquid hydrogen and oxygen. Alongside the rocket, two smaller boosters stood in formation. Together, the troika would generate the massive amount of thrust necessary to escape the earth’s gravitational pull and carry the Discovery into orbit.

When the rockets ignited, cones of flame poured forth from their bases. The early morning sky, still the color of a bruise, warmed to orange. As a river of fire and smoke poured out, Gibson could feel the ground beneath him begin to tremble.

“You wouldn’t believe the rumble, the sound it makes,” he says. “The ground shook. I tell you, it felt like even the sky around us shook. It was so, so impressive.”

He watched the Discovery as it rose higher and higher. The shuttle and its flotilla of rockets shrank from view as they rose—from coin-sized, to fingernail, to a tiny fleck. And then they were gone.

Still, Gibson knew that soon, the shuttle would reach orbit. And he knew that somewhere out in that vast blue expanse, his former OMRF lab partner was living a dream that nearly every human being has had.

Born in 1943 in China to Baptist missionaries, Lucid was just 6 weeks old when Japanese soldiers took her family captive during World War II. After seven months in prison camp, they were released as part of a prisoner exchange. They left the country, only to return to China following the war. And it was in China that Lucid got her first taste of flying.

The plane was a converted army transport with no oxygen. As it bumped and lurched over Chinese mountain ranges, her siblings both became airsick. But not 5-year-old Lucid. “I loved it, just loved it,” she recalls. “As we were coming in to land, I saw a tiny little person on the ground, and, to me, it was the most remarkable thing on the face of this earth. I decided right then that when I got older, I would learn to fly.”

The family returned to the U.S. soon after, then moved to Bethany, Oklahoma, where Lucid would spend the balance of her childhood. It was also the place where she’d nurture her twin passions: science and flight.

As an eighth grader at Bethany Junior High, she penned an essay titled “How to be a space scientist.” In it, she outlined what she thought it would take to be an astronaut. She was so taken with space that she sold her bicycle to purchase a telescope. “My best friend and I made our own map of the moon, like we were real astronomers.”

In her senior year, she was selected for the national science fair. She then applied to spend the summer at OMRF as a Sir Alexander Fleming Scholar. Although she wasn’t chosen, her science teacher, Mrs. Moon, nevertheless arranged for her come to OMRF. “That summer was a very, very good experience for me,” she says. “I really felt like a grownup working in that lab.”

After earning her B.S. in chemistry—and her pilot’s license, which she paid for with part-time jobs—at the University of Oklahoma, Lucid really did come to work at OMRF,  as a technician in the cancer research program. But not long after she felt financially secure enough to buy her first plane (a Piper Clipper that she used to fly her father to church revival meetings around the state), her boss’ grant funding ran out, and she lost her job.

She found a position at Kerr-McGee and got married, but she lost that job when she became pregnant and her employer pronounced her unfit to work in a lab. After a bout of post-partum depression, she says, her husband helped nudge her forward. “He said, ‘You can’t just sit around and feel sorry for yourself. Why don’t you go to grad school and get your Ph.D.?’”

Yet even after receiving her doctorate in biochemistry from OU, opportunities were scarce, especially for women. After months of searching, Lucid found a job in 1974 at OMRF, where she’d eventually settle into a position as a post-doctoral fellow in the Biomembrane Research Section.

“Shannon hadn’t been working in a field even close to what we did then,” says Dr. Paul McCay, who headed the research program. “But she came highly recommended to us as someone who was very talented.”

In the lab, she studied how chemicals cause cancerous changes in cells. Working closely with Don Gibson, a research assistant at OMRF, she examined how a particular cancer-causing agent was metabolized in the livers of laboratory rats. The work would ultimately provide a better understanding of liver cancer in humans.

“Shannon was very driven,” Gibson remembers. “She was organized and task-oriented. When we worked together, if we bit off a chunk of work to do, we were going to get it done, come hell or high water.”

Still, Gibson found Lucid to be “just real easy to work with.” During the four years they spent elbow to elbow at the lab bench, they shared countless personal stories. Often, Lucid would talk about flying. She recounted to her labmate how she’d repaired and restored her plane. And then flew it everywhere. “I was enthralled,” says Gibson. “When she’d tell me those stories, I’d immediately think of Amelia Earhart.”

Gibson rolled his eyes when Lucid pulled him aside in 1978 to tell him she’d been chosen to go into space. “Yeah, right,” he said to his labmate. “And what else are you doing next week, Shannon?”

But Lucid’s selection to become part of the first class of woman astronauts in NASA’s space shuttle program was no joke. Still, until that moment, only Lucid’s husband had known she’d applied to the NASA program.

When the news broke that NASA had chosen Lucid among its class of 6 women and 29 men (from a total of 1,000 women and 6,000 men who’d applied), the media inundated Lucid with interview requests. Local, national and international news outlets, including crews from Time, Life and People magazines, beat a path to OMRF’s door. Lucid even appeared on the CBS Evening News with Walter Cronkite.

Despite Lucid’s newfound fame, Gibson says his labmate-turned-astronaut remained “very down to earth.” She spent several months wrapping up her scientific projects at OMRF, determined not to leave any loose ends for her colleagues. Then she, her husband and three children moved to Houston, where she would begin astronaut training.

On the eve of Lucid’s departure, her friends and coworkers threw her a party. “We were really thrilled for Shannon and proud of her,” says McCay. “We knew that was what she really wanted to do.”

As Lucid ended her time at OMRF—which totaled six years between her two stints—the OMRF employee newsletter ran a long article about their departing colleague. “Good luck and Godspeed, Dr. Shannon Wells Lucid,” the story concluded. “Give our regards to the stars.”

It took seven years for Lucid to deliver those greetings to the heavens. With her Discovery mission in 1985, she became the sixth American woman to reach space. And once she got up there, she found it suited her: She went on to fly another four missions aboard the space shuttles Atlantis and Columbia.

As mission specialist—essentially the “space scientist” she’d described in her junior high essay—Lucid performed experiments of all kinds. She conducted a student’s project on the growth of ice crystals and studied the effects of space on wild wheat, which she cultivated in a tiny greenhouse. She observed quail embryos as they developed inside eggs. On one flight alone, she performed 32 separate experiments. And in a nod to her days at OMRF, she even did a project with lab rats.

“On the Columbia, we had 48 rats to tend, and I worked with them every day,” says Lucid. “I had the experience of doing similar work in the lab at OMRF. No one else on the mission had ever done that sort of thing, so I was a natural for that task.”

In 1996, she traveled to the Russian space station Mir, where she lived and worked for 188 days with a pair of Russian cosmonauts. “I had spent my grade school years living in terror of the Soviet Union,” Lucid later wrote. “We practiced bomb drills in our classes, all of us crouching under our desks, never questioning why. Similarly, [the cosmonauts] had grown up with the knowledge that U.S. bombers or missiles might zero in on their villages.”

The Russo-American trio, Lucid remembered, “marveled at what an unlikely scenario had unfolded. Here we were, from countries that were sworn enemies a few years earlier, living together on a space station in harmony and peace.”

When not tending to mission-related tasks, Lucid passed time on the space station doing what she loved to do on earth: reading. When she’d exhausted her initial supply of books, her daughters—with the help of a supply ship—sent up new reading materials for their mother. Lucid particularly enjoyed one fantasy novel they’d picked. But the book ended in a cliffhanger.

The astronaut remembers digging through the bag of remaining books, frantically searching for the sequel. “Was there volume two in my book bag? No. Could I dash out to the bookstore? No.” She’d have to wait until she returned to terra firma to find out the protagonist’s fate. “Talk about a feeling of frustration.”

Despite Mir’s zero-gravity environment, Lucid maintained fitness using a treadmill she’d jury-rigged. After she pulled on a harness that tethered her to the four corners of the machine, she’d add resistance to simulate the earth’s gravitational pull. Then she’d pound away on the machine. By the time she finished her daily run and stowed her equipment, two hours would have passed—and she would have circled the earth again.

Thanks to her extraterrestrial workout regimen, when she landed, she was strong enough—a rarity among astronauts, even those who’d spent far less time in orbit than Lucid—to walk across the tarmac under her own power. Upon her return to NASA’s Johnson Space Center, she was greeted by a crowd of well-wishers. Among them was then-President Bill Clinton, who presented Lucid with a huge jar of her favorite treats, M&M’s.

That mission would prove to be her last. All told, she’d circled the earth more than 3,000 times and logged 5,354 hours in space. The latter set a new mark for American astronauts, a standard that stood until 2007.

After she hung up her flight suit, Lucid served as NASA’s chief scientist, helping to develop the agency’s science and research objectives. She assisted astronauts as they prepared for long-duration space flights and served as a capsule communicator in Houston, where she was the voice of ground control for space shuttle and international space station crews. “It was such a fun job,” she says. “If you can’t be in space yourself, it’s probably the next-best thing.”

In 2012, following a 34-year career at NASA, Lucid retired to devote all of her attention to her husband, who’d been diagnosed with dementia. She cared for him at their home in Houston until he passed away two years later.

Now Lucid says she’s gradually re-engaging with the world. Though she doesn’t have any current plans to head back into space, she would leap at the chance. “Oh, yeah! Yes, yes!” she says with the enthusiasm of an avid fan watching her favorite team score. “But even if I never go again, I know I’m one of the most fortunate people around.”