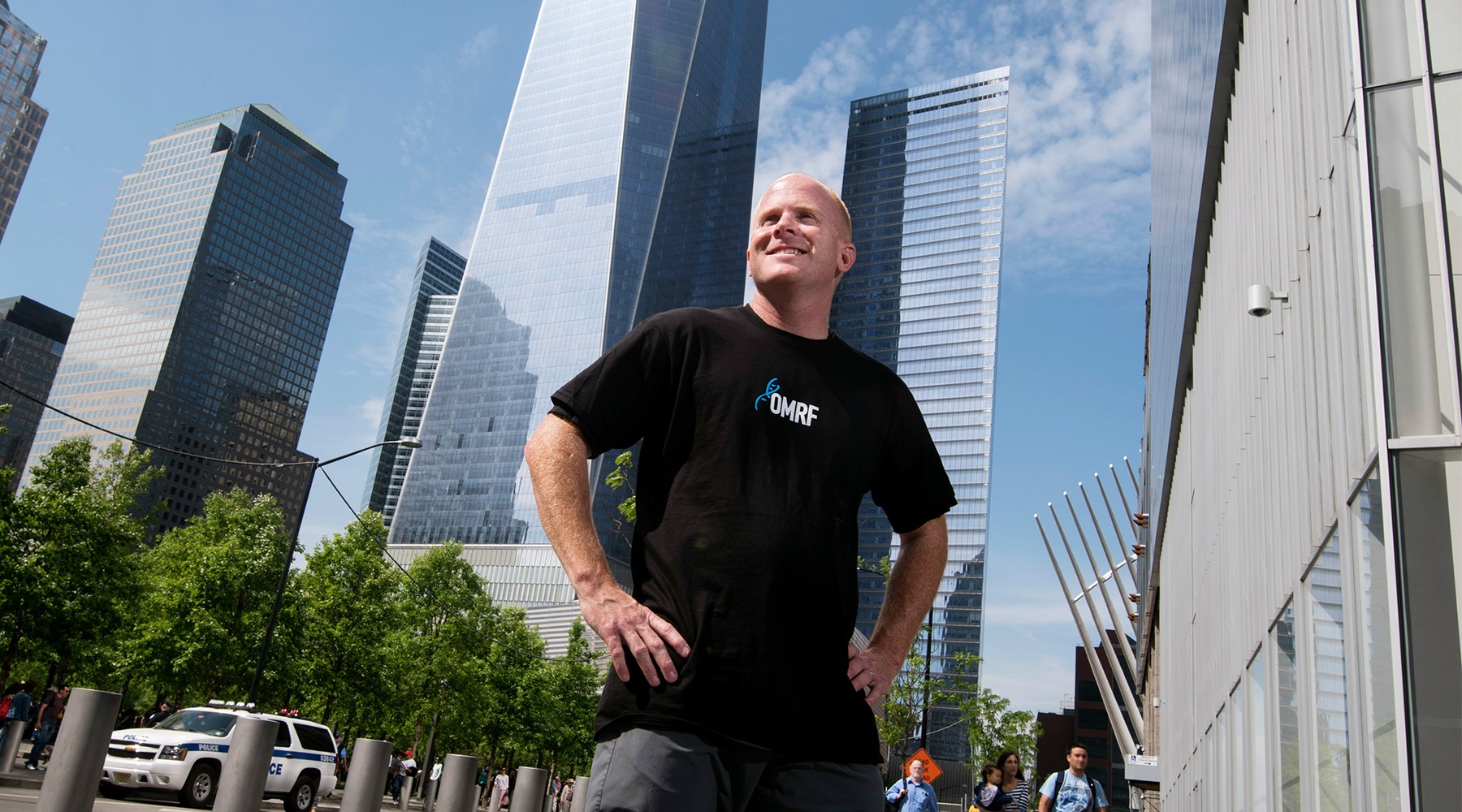 Home - Findings - On the up and up

A systems administrator who joined OMRF in 2001, he has good reason to avoid mechanized lifts: “Every flight of stairs I climb is training.”

He is the 28th-ranked tower runner among U.S. amateur men, according to Stairsport.com. The site ranks more than 34,000 Americans who, like Pazoureck, compete in competitive stair-climbing races.

A relative newcomer to the sport, Pazoureck completed his first race at Chicago’s Willis Tower (103 floors) in the fall of 2014. He ascended the building’s 2,109 stairs in just over 20 minutes, placing him in the top 100 of more than 3,000 participants.

Since then, he’s competed in the Big D Climb at the Comerica Bank Tower in Dallas (1,276 steps) and the Stratosphere Climb in Las Vegas (1,455 steps). Closer to home, he finished third in Little Willie’s Triple Dog Dare (up and down three Oklahoma City office towers), and he won the local Fight for Air Climb.

Before taking up stair-climbing, Pazoureck, who lives in Yukon with his wife and two children, was a biker, skier and occasional participant in local runs. “But I was never a strong runner,” he says. “I was always middle-of-the-pack.”

To speed his recovery from a torn Achilles tendon three years ago, he began attending classes in OMRF’s onsite fitness center. Boot-camp exercises led him to realize that he had a talent for climbing stairs.

Pazoureck’s training typically involves twice-daily workouts that use a mix of running, gym work and classes to build fitness. He starts at the crack of dawn with his trainers at Fitness Together in Yukon. In addition, he tries to climb—and descend—at least 30 to 40 floors a day, usually in OMRF’s research tower. Often, to make the stair-climbing workouts more challenging, he’ll don a 35-pound weight vest.

“From the time he first walked into the fitness center to now, Brad has increased his fitness level exponentially,” says Kelie Ashley, who manages OMRF’s fitness center and helps Pazoureck coordinate his training. “His dedication to training, his energy and his passion for this sport have been incredible to watch over time.”

According to Stairsport.com, stair-climbing competitions have grown more popular in recent years, with more than 100 events now taking place across the country. The events use staggered starts, with racers beginning every 5 to 10 seconds. Competitors employ their arms as well as their legs in the ascents, using handrails to help pull them up.

“It’s a total body workout,” says Pazoureck. “This may sound clichéd, but it’s the hardest sport you’ve never heard of.”

Despite the intense nature of stair-climbing, the sport’s community “is like one big family,” he says. “Everyone is there to do the best they can but also push each other to do as well as they can. It’s an amazingly friendly competition.”

In May, he participated in the first ever race up One World Trade Center, the newly constructed skyscraper that’s the tallest in the U.S. The race ascended 90 of the building’s 104 stories. Pazoureck made the climb in just over 16 minutes, covering an average of 5½ floors each minute. “It was an amazing experience,” he says.

Up next are a climb to the top of Seattle’s Space Needle in October, followed by a return to Chicago in November. There, he’s striving for another milestone: two races in the same day, including another trip up Willis Tower.

Regardless of whether he meets his goal of climbing the Windy City’s tallest building in less than 18 minutes—a significant improvement on his inaugural effort last year—Pazoureck knows he’s definitely discovered his athletic niche. “Now I’ve found a sport where I can excel, and it’s pushing me to improve every day,” he says. “It’s changed my life for the better.”