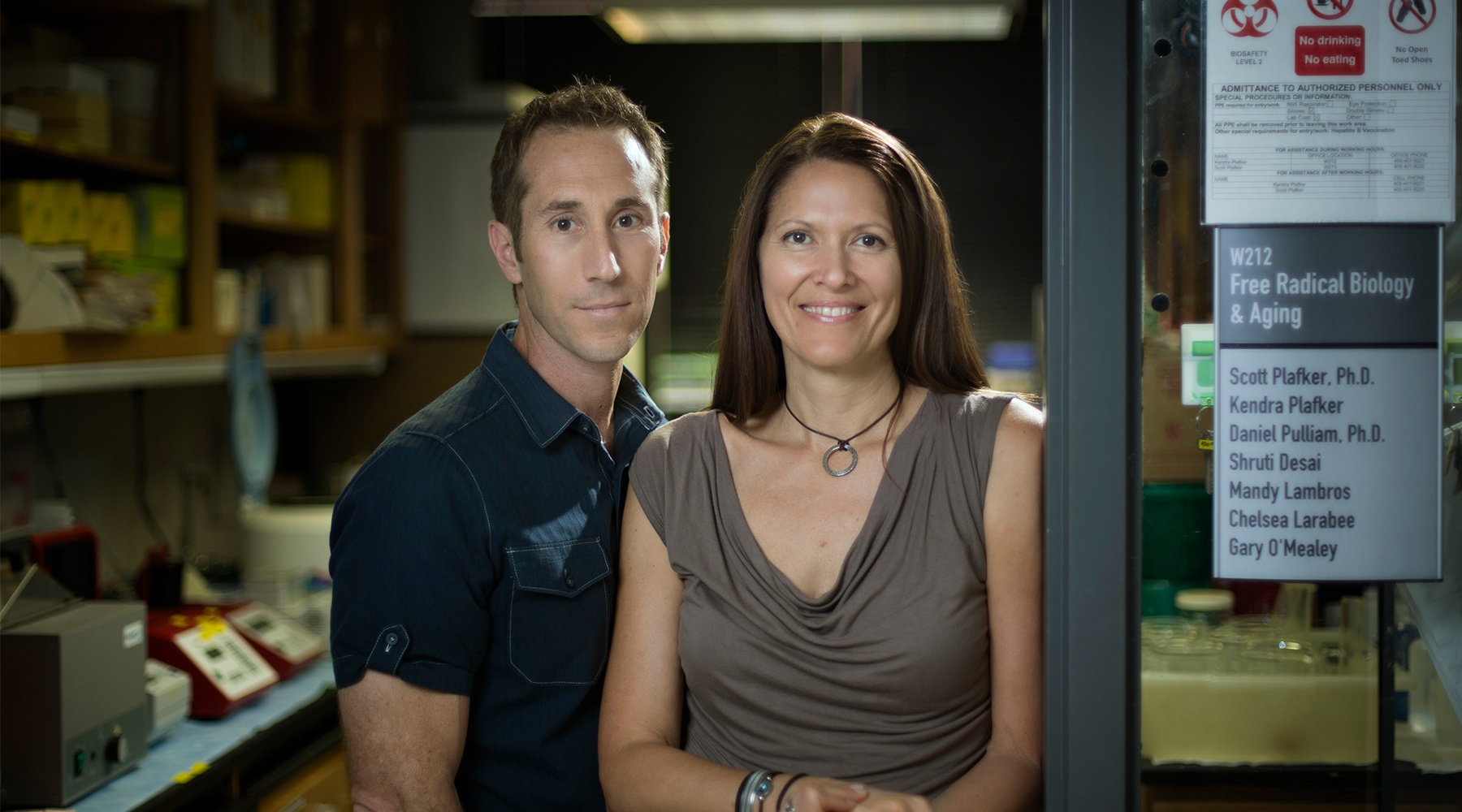 For Scott and Kendra Plafker, medical research is a team sport

Scott and Kendra Plafker have been married for 17 years. But this spring marked a milestone that precious few couples ever celebrate: Their first scientific paper co-authored solely by the pair.

“We’ve had plenty of papers with both our names on them, but it was special to be able to publish something on our own, just the two of us,” says Dr. Scott Plafker, a researcher in OMRF’s Aging and Metabolism Research Program.

With his wife, Kendra, he studies age-related macular degeneration, the leading cause of vision loss among elderly Americans. The couple is searching for ways to prevent and improve the treatment of the debilitating eye disease.

For many wives and husbands, working together might prove a recipe for disaster. But for the Plafkers, they’ve built a successful partnership in the laboratory by defining what each spouse is responsible for.

He sets the overall direction of the research, designing experiments and writing the grants that fund the projects. Meanwhile, she manages the day-to-day operations of a six-person lab that conducts the experiments.

“The goal is to have somewhat defined roles that complement one another so we can be as efficient as possible,” says Kendra. “We’ve done it long enough now that we have figured out how to strike the right balance. It just took time.”

The pair met in the early 1990s, when she was a lab technician and he was a graduate student at Johns Hopkins University in Baltimore. They married in 1997 and relocated to the University of Virginia and, ultimately, to Oklahoma in 2003, when he accepted a position to run his own laboratory, and she became his lab manager.

That transition, says Kendra, proved challenging. “We had worked side-by-side in the lab for years but on totally different projects. Once we moved to Oklahoma, everything was the same: the same projects, the same work schedule. That was a little weird to not have our own niches.”

Over time, though, the two figured out how to find balance by dividing up responsibilities. It’s similar to how they handle things on the home front, where Kendra cooks and manages finances, leaving laundry and cleaning detail to Scott.

“I’d definitely say Kendra is more in charge of big-picture things at home, and I’m more detail-oriented,” says Scott. “Our roles are completely reversed from how they are at work.”

In the lab, their successful collaboration has most recently led to the Plafker-and-Plafker-authored paper in the journal Molecular Biology of the Cell. The research study focuses on one of the main molecules they’ve been studying at OMRF.

That molecule, known as NRF2, is a powerful protein that’s in every cell in the body but is unable to operate or move until it’s released by a chemical activator. Understanding how it migrates into the nucleus of the cell and binds to DNA, says Scott, could help scientists gain a deeper understanding of a variety of illnesses, including macular degeneration.

“To use a military reference, the protein NRF2 is like a general that is responsible for keeping the cells in our body safe from stress,” he says. “NRF2 orchestrates the troops—the many distinct types of anti-stress proteins in a cell—to work in a coordinated manner so they can effectively neutralize stress.”

Their manuscript has uncovered a new mechanism that regulates NRF2 to work more efficiently and better protect cells. Decreases in the NRF2 defense system have been linked to age-related macular degeneration and to other neurodegenerative conditions, including Alzheimer’s, Parkinson’s and Huntington’s diseases.

While working together might drive some couples to seek “alone time” off the job, the Plafkers enjoy many joint pastimes, including playing Scrabble, binge-watching shows on Netflix and traveling across Europe. They usually commute to and from work as a couple and can be found almost every day eating lunch together in the OMRF cafeteria.

Spending so much time with each other might not work for all couples, but, says Kendra, “It’s the only way we’ve ever known.” In fact, when Scott changed labs for a brief time, they realized just how much they cherished and missed their hyper-interactive partnership.

“Only seeing each other on the way in to work, at lunch and on the drive home,” she says, “that was weird and lonely.”