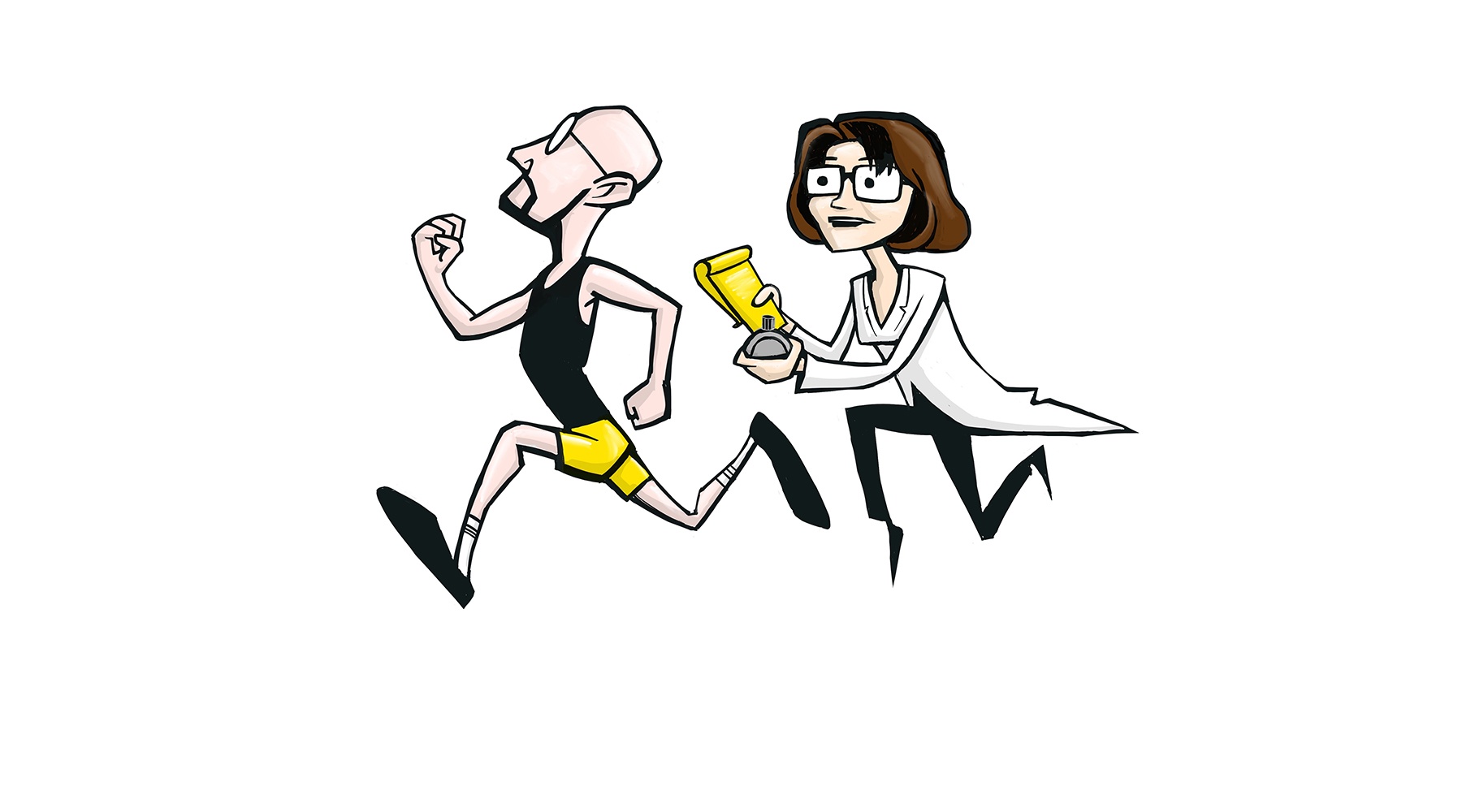 An OMRF researcher proves there’s no need to hang up your running shoes as you age, and that makes one of her colleagues very happy.

Since he first laced up his sneakers for his high school track team in the 1970s, OMRF scientist Dr. Gary Gorbsky has relied on running to help him stay healthy and active. It’s a habit that has given him time to be alone with his thoughts and work through the challenges he’s found in life.

As a career scientist and runner, he’s heard all the “conventional wisdom” that assumes running or jogging will eventually cause arthritis and wear down your knees. So he was especially pleased to hear the findings made about his favorite sport by his OMRF colleague Dr. Eliza Chakravarty.

Chakravarty was part of a team of researchers who studied thousands of runners over the course of more than 20 years. The scientists were investigating the long-term effects running has on the knees, and what they found surprised them. Not only was running not bad for the knees; it actually benefited them.

“I love those results,” says Gorbsky, “because they support my basic contention that exercise is good for everything. Whatever health concern you might have, exercise improves your life.”

Indeed, running has also been proven to lower risk of heart disease, stroke and even cancer. But those benefits have long been thought to come at the expense of your knees and the constant pounding they receive.

In Chakravarty’s study, the control group was comprised of people with similar education levels, body mass indexes and other factors. The only significant difference was whether they were runners. “We didn’t just study runners versus a bunch of overweight people who ate fast food and lounged around on the couch,” she says.

Not only did the knees of the runners display less wear and tear than the non-runners, the runners reported less osteoarthritis and cartilage loss and were also less likely to have bone-on-bone knee replacements. In addition, the researchers found all types of disability were greatly reduced in people who ran at any age.

“When you think about it, it makes sense, because the more you exercise, the more you strengthen the supporting ligaments and muscle structures that protect the knee,” Chakravarty says. The reinforcement from strong quadriceps and other stabilizer muscles can better protect knees from damage. This becomes more important as a person ages, helping to counter natural muscle loss.

But, of course, that doesn’t mean that running promises immunity from injury and disability.

“Any exercise can result in the occasional sore knee, tender Achilles or tight hamstring,” says Gorbsky. “But I’m pleased to see such thorough research refuting the idea that running would lead to something more serious like arthritis.”

Gorbsky himself stands as a testament to Chakravarty’s research. Not only has he continued to run as he’s gotten older, but he’s now logging his highest mileage levels ever, with no knee issues. What’s more, his hard work is paying off at the finish line.

In 2015, at the age of 60, he for the first time met the qualifying standard for the Boston Marathon. And in April 2016, he joined 30,000 other qualifiers in the world’s oldest and most prestigious annual marathon.

“I was happy to finish and satisfied with my performance,” says Gorbsky, who covered the 26.2-mile course in 4 hours and 10 minutes. He suffered some cramping due to temperatures that reached 80 degrees, but he was pleased that he was able to keep running from beginning to end, even while climbing the notorious Heartbreak Hill section of the course.

These days, Gorbsky runs about 25 miles a week, and he’s also cross-training with spin classes and exercise “boot camps.” In April, he’s planning on running the 2017 Oklahoma City Memorial Marathon, which he’s completed several times in the past.

His advice to his fellow Baby Boomers is to keep active and to choose exercise that gets your heart rate up. “Running is my cup of tea, but do what works for you,” he says.

After a recent run, Gorbsky went shopping while still wearing an OMRF workout tee. Spotting the shirt, another shopper asked him, “When are you scientists going to figure out the secret to eternal youth?”

“Oh, we already have,” Gorbsky replied without hesitation.

The shopper visibly brightened. “Really?” he asked. “What is it?”