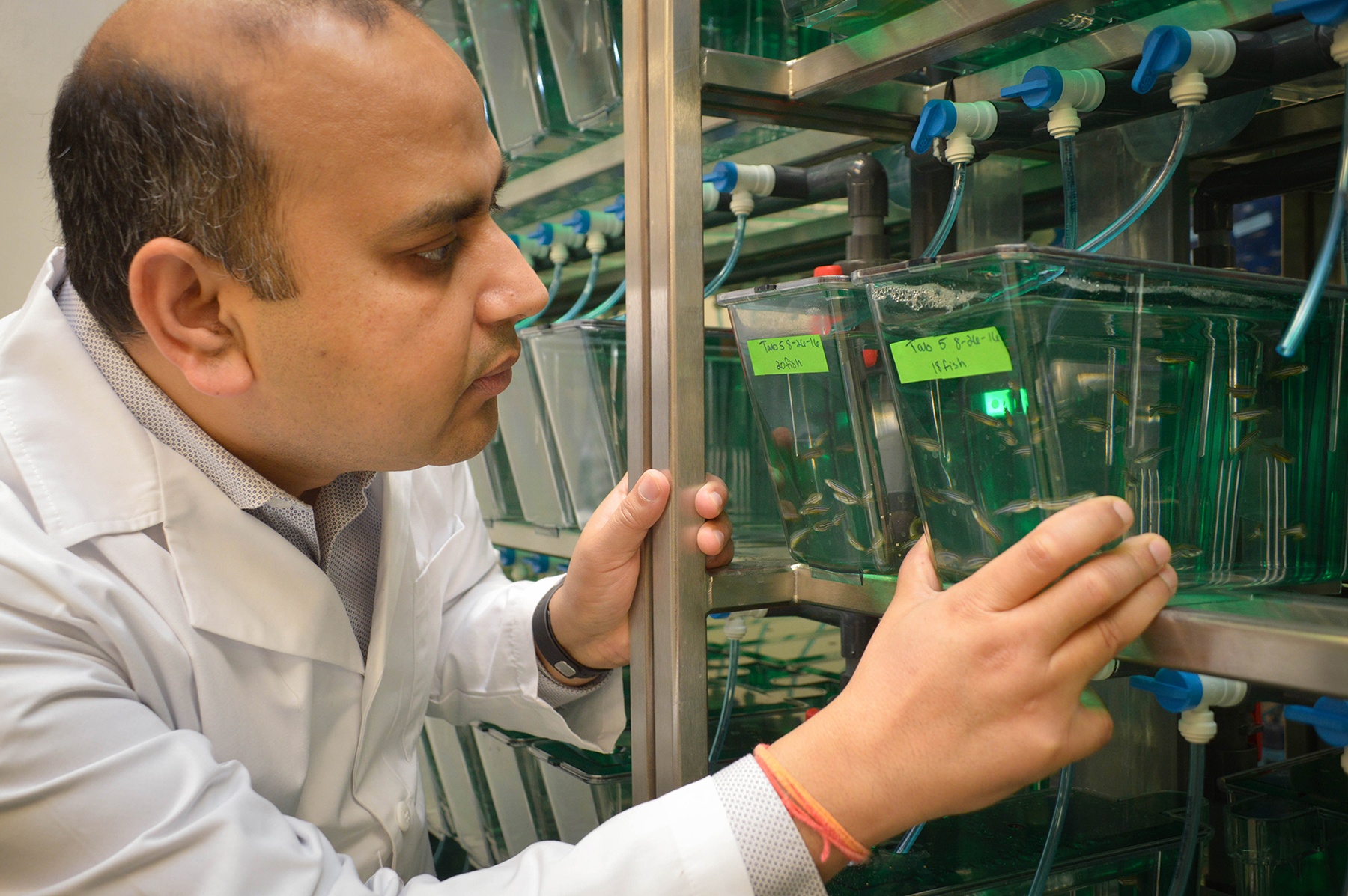 Home - Findings - A Cut Above

When Dr. Gaurav Varshney arrived at OMRF in late 2016, the first things he purchased for his new research program were fish tanks. Lots of them.

During a seven-year post-doctoral fellowship at the National Institutes of Health in Bethesda, Md., Varshney developed an expertise in studying developmental biology in paperclip-sized aquatic creatures known as zebrafish. Named for the dark, horizontal stripes that run the length of their silvery bodies, zebrafish provide scientists with a sort of living Petri dish for investigating human diseases. “Approximately 70 percent of human disease genes have a counterpart in these tiny fish,” says Varshney. “Because their embryos are transparent and develop outside the body, researchers can easily monitor different stages of embryonic development.”

In particular, Varshney uses colonies of zebrafish to understand the disease pathology and molecular mechanisms of hearing loss. To do this, he manipulates the DNA of fish embryos, then studies if and how particular genetic changes impact the ensuing development of these “mutant” fish.

The ability to induce genetic mutations has historically served as a major stumbling block in medical research. Laborious and slow, the process of engineering a single genetic mutation could take a dedicated lab many months, even years. Even then, the results were far from guaranteed; altered genes frequently ended up in random locations on the genome or appeared in widely varying numbers.

Due to these limitations, researchers like Varshney constantly search for new and more efficient methods to alter genes. Not long ago, he found one.

Known as CRISPR—short for Clustered Regularly Interspaced Short Palindromic Repeats—the groundbreaking technique consists of two components. The first is essentially a cellular scalpel that cuts DNA. “Think of it like molecular scissors,” says Varshney. The second consists of RNA, the molecule that most often transmits biological information in the body. The RNA acts as a guide for the scissors, escorting them past thousands of genes until it finds the precise section of the genome for the scissors to slice.

Although based on a naturally occurring virus-fighting cellular process in the immune systems of  bacteria and other microorganisms, scientists realized they could hack the process to construct a powerful new genetic tool. They devised a method to create synthetic versions of the RNA that they could program—enabling the scissors to target any gene they desired. After the scissors did their cutting, the scientists figured out how to “paste” new genetic material into the gap they’d just created.

Now, scientists who wished to perform genetics experiments no longer had to rely on an arduous and arbitrary process. Instead, with CRISPR, they could edit the genome with the sort of precision we’ve come to expect from the search-and-replace function on a word processor. “It’s been a game-changer,” says Varshney.

For Varshney, CRISPR has allowed him to test the function of scores of genes in zebrafish in a fraction of the time—and at a fraction of the cost—such studies previously required. In particular, he’s focused on the disease progression and mechanisms of hearing loss. His studies center on tiny hair cells in the ear that are central to hearing. “Because zebrafish hair cells are functionally similar to the hair cells found in the human inner ear,” he says, “they provide an excellent model system to understand the pathology of hearing loss.”

CRISPR’s utility, though, spans far beyond fish and hearing loss. Unlike previous techniques, the gene-replacement method seems to work in just about any organism. And it appears to be effective in every cell type, including ones that researchers had previously struggled to modify.

At OMRF, researchers are using CRISPR in mice to study genes that have been linked to colitis, colon cancer and vascular disease. Elsewhere, scientists have employed the technique to tackle autism, cancer and simultaneously alter 62 genes in pig embryos, creating animals that could, at least in theory, grow human organs for transplant.

In August, scientists announced that they had successfully edited genes in human embryos to repair a common and serious disease-causing mutation. The research marked a major milestone; while still far removed from clinical use, the experiment underscored the potential CRISPR holds for intervening against a variety of hereditary conditions in humans.

If scientists can master this technique, it could eventually spell the end of genetic diseases. By reprogramming the genetic mutations responsible for gene-based conditions such as cystic fibrosis or Huntington’s disease, researchers could protect not only the embryo carrying that damaged DNA but also future generations no longer at risk to inherit the flawed gene.

Human race-altering applications remain a long way off. But clinical trials for CRISPR-based treatments for individual patients loom much closer. Experts predict that in the near future, physicians will begin testing the injection of CRISPR components into, say, the eye to fix a sight problem. Or doctors may remove cells from the body, “fix” them in the lab with CRISPR technology, then re-inject them into patients. This approach might work in a condition such as sickle-cell disease, where CRISPR could prompt a genetic reboot, leading the body to stop producing mis-formed blood cells.

As treatments approach the clinic, the debate about the ethical implications of gene-editing has also heated up. “The social dangers of creating genetically modified human beings cannot be overstated,” the executive director of the Center for Genetics and Society told National Public Radio.

The arguments echo ones that surrounded the first in vitro fertilization in 1978 and the cloning of Dolly the sheep in 1997. With more than five million children born through IVF and not a single human being having been cloned to date, those furors seem to have subsided. If CRISPR helps unravel the mysteries of autism or cures conditions like hearing loss or early-onset Alzheimer’s, it’s a fair bet today’s debates will grow similarly silent.

In the meantime, with all the necessary components to edit a particular gene available to be ordered online and delivered in a matter of days, the science in Varshney’s lab and around the globe continues to move forward at breakneck pace. “It is,” he says, “an extremely exciting time to be working in the field of genetics.”