In a world where just about anything we need or want can be summoned in a maximum of 48 hours with a click of a button, waiting a year for something can seem an eternity. Especially when that something is a Covid-19 vaccine.

But the last few weeks have brought a series of exciting developments on that front. In rapid succession, drugmakers Pfizer and Moderna both announced that preliminary results showed their experimental vaccines to be safe and more than 90% effective. 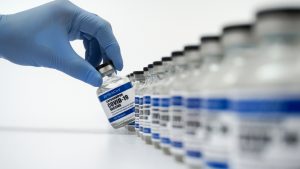 Pfizer followed up by reporting final results of 95% effectiveness, with no serious side effects. The vaccine appears to work across all age groups, protecting against both mild and severe Covid-19.

On Friday, the company submitted an application to the FDA to authorize its vaccine for emergency use. Moderna’s final trial data should come soon and likely echo Pfizer’s numbers, prompting an FDA application for its vaccine, too. Read more: Five reasons to be excited about vaccine news >>

Unless something wildly unexpected happens during FDA review, it will have taken less than a year from when international health experts first identified an outbreak of “unexplained pneumonia” in Wuhan, China, to the launch of a safe and effective vaccine (and probably two).

This timeline is unprecedented. The previous record was for the Ebola vaccine that received approval in 2019, the culmination of a six-year process.

Scientists were able to shave more than 80% off this standard, in part, because of the unprecedented focus and resources we’ve devoted to fighting the pandemic. But what also allowed them to push the scientific fast-forward button was the reinvention of vaccine technology. 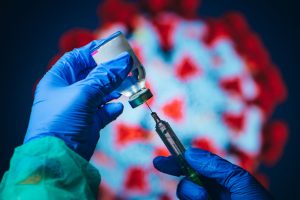 To protect against the coronavirus, Pfizer and Moderna used a novel approach called messenger RNA. It’s no overstatement to say that this synthetic molecule now stands to save millions of lives.

However, for many years, the scientific establishment ignored mRNA. Indeed, but for the persistence of a handful of researchers, mRNA would have been consigned to the scrap heap of biological history.

Messenger RNA occurs naturally, carrying instructions to cells to tell them which proteins to make to keep themselves alive and healthy. Scientists had long theorized that the process could be reprogrammed. If you could design your own mRNA, it could instruct the body to make any protein you want: enzymes to reverse genetic diseases, growth factors to mend damaged tissues – or antibodies to guard against infection.

In 1990, scientists turned this theory into practice in mice. But when they tried to bridge the work to humans, they repeatedly encountered mRNA’s Achilles heel: The body would treat the synthetic molecule as an invader, turning its immune system against it to destroy it.

Throughout the 1990s and early 2000s, a pair of scientists at the University of Pennsylvania struggled to overcome this hurdle. Their work was ignored by prestigious scientific journals and scorned by funding agencies. But beginning in 2005, with a series of papers that at first flew under the radar, they figured out a way to create a hybrid mRNA that could be secreted into the body without setting off the immune system’s defenses.

Eventually, these discoveries caught the eyes of some key scientists, who would go on to found Moderna and BioNTech, a German company that would become Pfizer’s partner in developing its mRNA vaccine.

While the two vaccines use slightly different approaches, both inject synthetic mRNA protected by a fatty coating into the body. Once inside, the mRNA hijacks our cellular machinery, causing it to churn out spike proteins like those the coronavirus uses to infect us. The immune system then learns to mount a defense against these proteins, so if we’re later exposed to the actual virus, we can repel it. 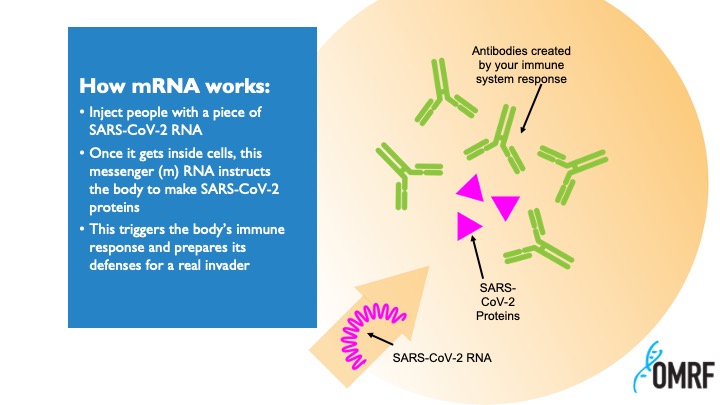 Traditional vaccines require a time-consuming, laborious manufacturing process, often relying on eggs or large bioreactors to grow key ingredients. Pfizer’s and Moderna’s vaccines do not, and as a result, they can be made much more quickly.

The new vaccines have some limitations not seen in most widely used vaccines, particularly the need to be stored at sub-zero temperatures. They also must be administered in two doses, spaced several weeks apart. And much still remains to be learned about them, including how long their apparent protection from Covid-19 lasts and how well they work in vulnerable populations like older people. Read more: OMRF’s Dr. Judith James on vaccine distribution challenges in Oklahoma

Nevertheless, these vaccines represent a tremendous leap forward. Not only are they poised to end a pandemic, but they represent a bulwark against future outbreaks of infectious illnesses. Scientists also believe that mRNA could provide new treatments for cancer and heart disease.

So, when we sit down at our pandemically reduced celebrations on Thursday, we might take a moment to give thanks for the ways in which medical research improves our world. Like our very own Oklahoma Medical Research Foundation, it exists “so that more may live longer, healthier lives.”