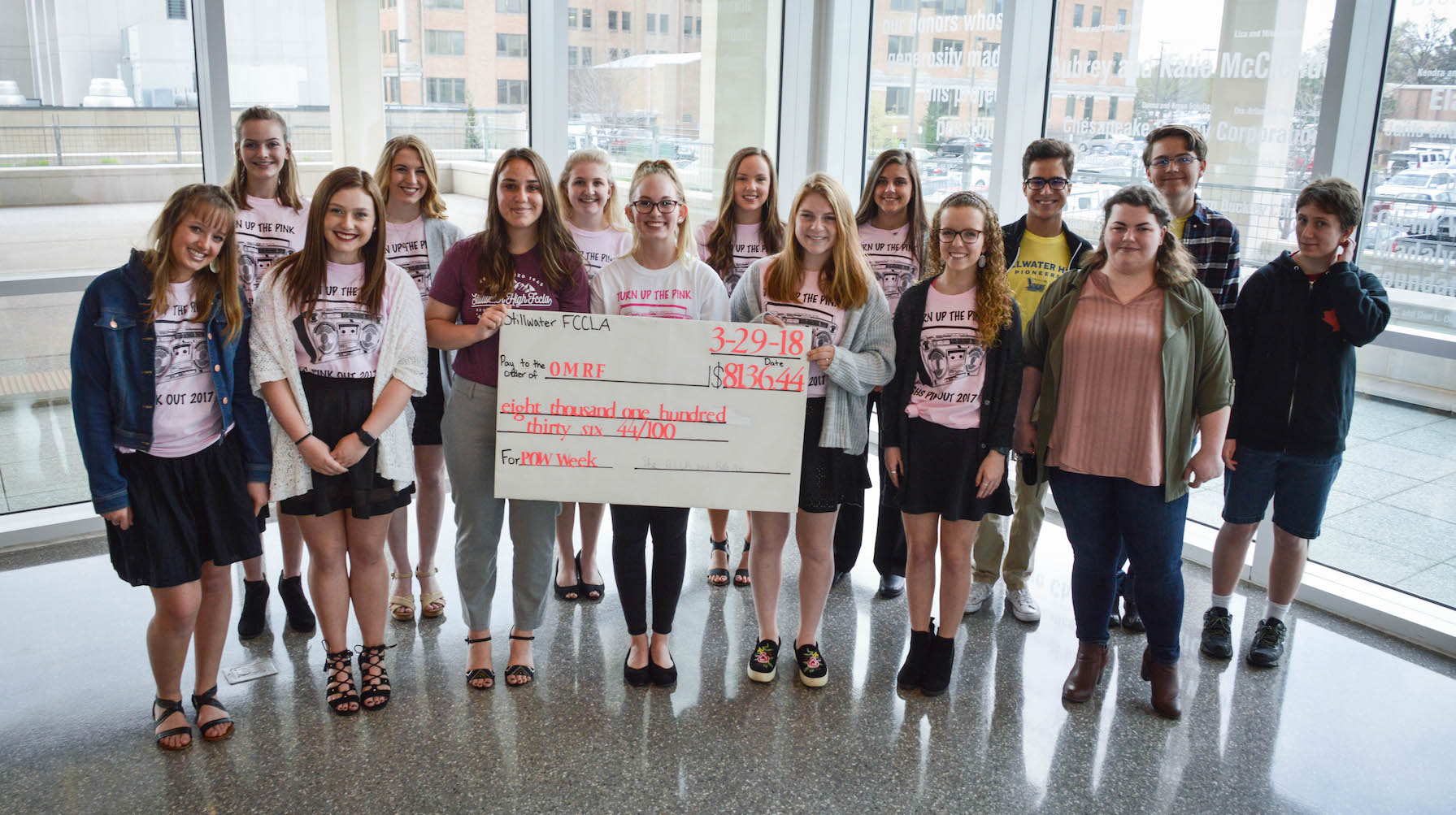 No one chooses cancer, but anyone can choose to do something about it.

It’s that mindset that drives Jody Webber, sponsor of Stillwater High School’s “Pink Out Week,” which raised $8,136 for the Oklahoma Medical Research Foundation with a weeklong series of fundraising efforts in September.

To thank the school, OMRF welcomed 15 students and faculty from SHS on Thursday for lunch and a tour of the foundation’s facilities and an up-close look at cancer research in action.

Webber, who is in her first year as the district’s sponsor, said generating support for cancer research is a cause everyone can get behind, especially at a place like OMRF.

“The money is going to the right place. The fact that OMRF puts all donations into research is key, so we know every dollar someone puts in a bucket passed at a ballgame in the fall is really going to make a difference,” she said. “Everyone has been touched by cancer in one way or another, and it is empowering to know that we can do something about it.”

Since naming OMRF as its charitable beneficiary in 2011, Stillwater High School has raised nearly $50,000 for cancer research at the Oklahoma City-based nonprofit.

OMRF’s cancer research efforts include studying problems in cell division that set the stage for cancer to develop. Foundation researchers have also developed an experimental drug that is in ongoing clinical trials to treat a deadly form of brain cancer called glioblastoma.

Stillwater High students, led jointly by the school’s Family, Career and Community Leaders of America and Beta Club organizations, raised the funds specifically for cancer research at the foundation.

“OMRF was really impressive, and it’s great to see that the money is going toward real change and progress that can some day lead to a cure,” said Stillwater senior Sydney Bella, the FCCLA president. “Maybe as students we can’t necessarily be the change, but we can be the catalyst.”

During the most recent “Pink Out Week,” students raised money at local restaurants, The Garage and El Vaquero. At school, they held a bake sale, a hat day, where students purchased stickers to participate, ‘80s dress day, “penny wars” to see who could collect the most pennies in a jar, t-shirts sales and a silent auction.

Students also passed collection buckets through the stands at the football game against Mustang, as well as volleyball and softball games.

“The generous support from the students at Stillwater High School and the surrounding community allows our scientists to keep searching for new discoveries in the fight against cancer,” said OMRF Vice President of Development Penny Voss. “All of us at OMRF are truly grateful and honored to have these bright and compassionate students raising funds and awareness for the incredible research going on right here in Oklahoma.”