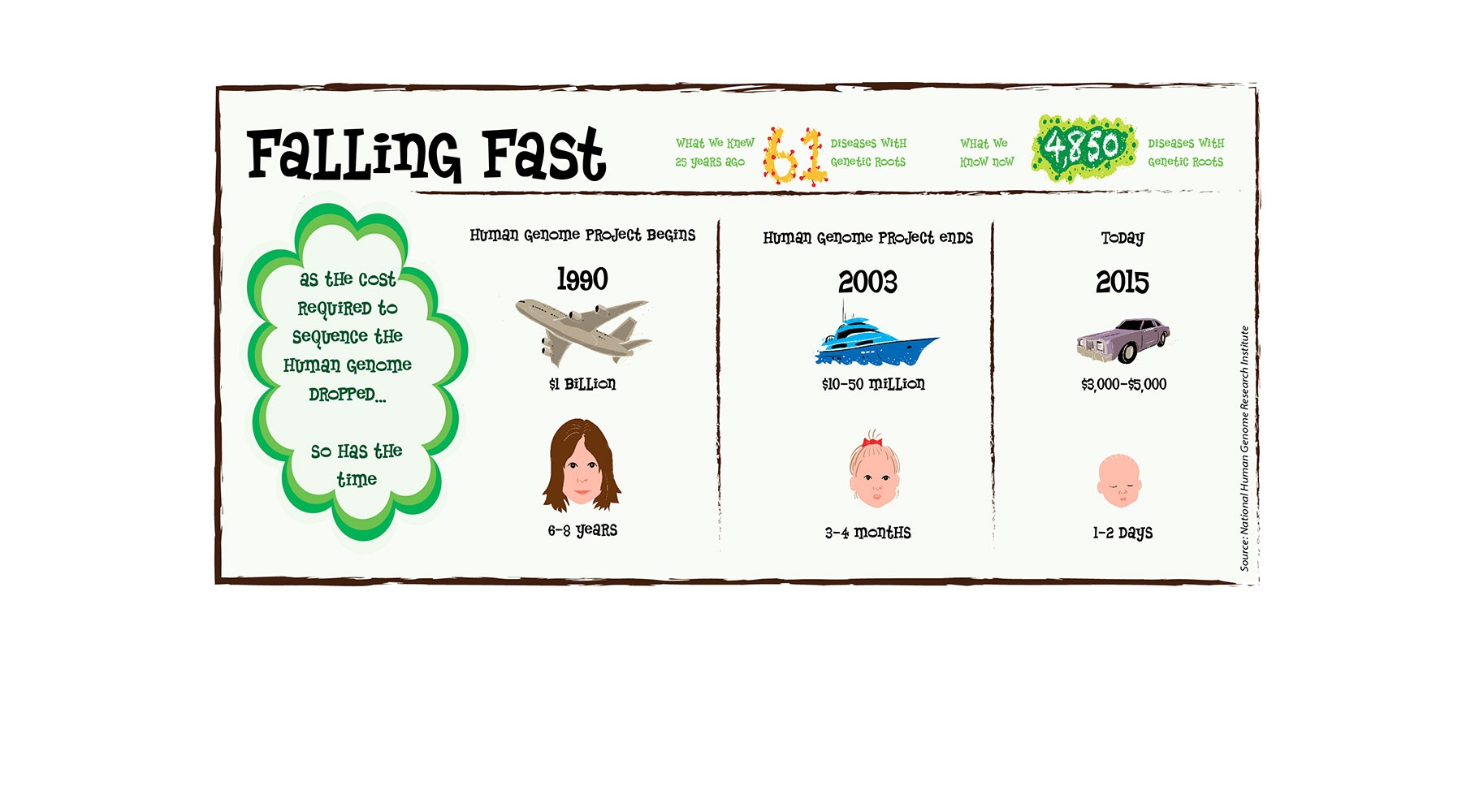 Home - Findings - Talk About a Revolution

Putting a man on the moon was a pretty big deal. Ditto for splitting the atom. But in the eyes of biologists, both of these scientific milestones pale in comparison to a more recent landmark: the sequencing of the human genome.

Scientists first produced a complete map of the genome (the technical term for all of the genes in our body) in 2003. That map, a sort of reference guide to the generic human, consisted of roughly three billion base pairs, the four chemicals that make up DNA.

Over the next decade, researchers significantly refined that DNA blueprint with data gathered from sequencing the genomes of hundreds of thousands of additional subjects.

Using second-, third- and fourth-generation technology that has drastically reduced the price and time required to map out an individual’s DNA (see graphic below), medical research centers like OMRF now routinely complete a scan of a person’s entire genetic code in less than 48 hours. And while decoding the genome has yet to produce the wave of new drugs that scientists initially envisioned, it has yielded a steady drumbeat of success stories.

At OMRF, those successes include genome-wide association studies that have expanded the understanding of genes associated with two autoimmune diseases, lupus and Sjögren’s syndrome. And led by Dr. Patrick Gaffney, OMRF scientists have identified the genetic roots of Adams-Oliver syndrome, a congenital disorder with only 100 or so cases ever documented in the medical literature.

“This technology has basically turned the field of diagnosing rare genetic syndromes on its ear,” says Gaffney, who holds the J.G. Puterbaugh Chair in Medical Research at OMRF. “We now have the ability to identify specific mutations that cause genetic diseases. We just couldn’t do that in the past.”

Within the next year, health experts predict that at least 100,000 Americans will undergo some level of genetic testing. Most of these tests look at specific regions of the DNA for mutations that researchers have linked to certain diseases. But, cautions Gaffney, the results that come back are often difficult to interpret and can yield far more questions than answers. “It’s important for people to have genetic counseling both before and after these tests are administered so they understand the real meaning of the results they receive.”

In the public health arena, researchers are now using genetic sequencing data to rapidly pinpoint the origins of the outbreaks of contagious diseases like Ebola and influenza. They’re also employing DNA sequencing to understand what drugs a particular patient might—or might not—respond to in certain diseases.

For example, by analyzing the DNA found in a cancer patient’s tumor, physicians can select a specific targeted therapy based on that person’s genetic profile. “This is precision medicine,” says Gaffney. “And it’s only a matter of time before we’re doing the same thing in conditions like diabetes and heart disease.”