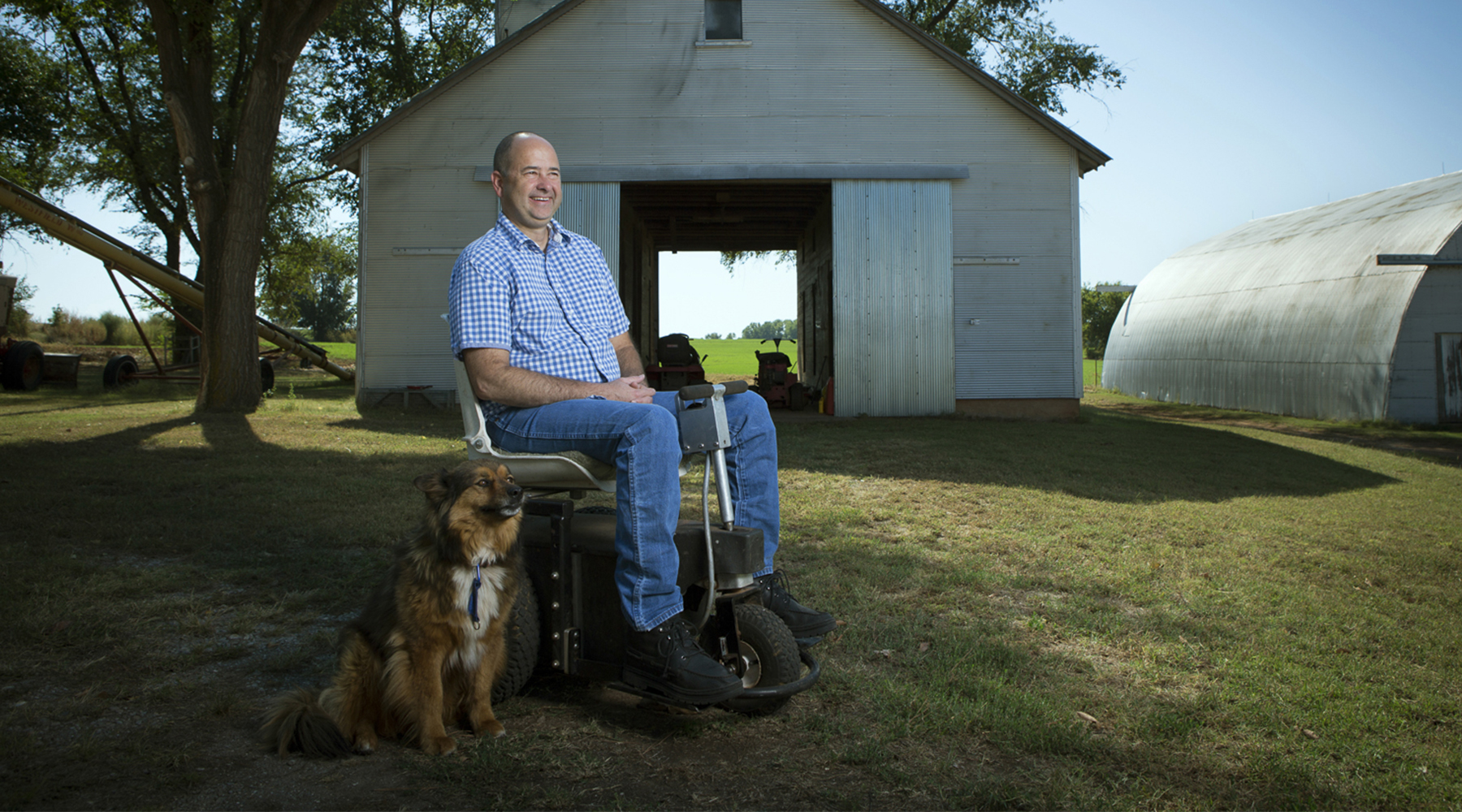 It’s a sunny mid-October afternoon, and a lush, green carpet of sprouting winter wheat covers the fields around John Enns’ farm near Waukomis, Okla. One more day, he says, and his crop will be in the ground. If all goes well, these acres will yield a bumper crop of wheat next June.

Enns zips across the yard, faster than some people on two legs, to slide open the large metal shed doors to prepare for our photo shoot. His dog Snoopy trails behind, accustomed to the sound and motion of Enns’ “ag scooter.”

The custom-made, motorized chair Enns drives is part wheelchair, part tractor. Designed and built by a disabled farmer, the scooter comes equipped with attachments, like a blade that will clear up to two feet of snow, to help with tasks around his property. The scooter is an essential part of Enns’ role as a farmer, because on the farm, the work doesn’t wait.

When a farming accident broke Enns’ back in three different places, doctors told him he would never take another step. But after surgeries and years of rehabilitation, Enns got to the point where he could walk nearly 700 feet—until a rare accumulation of fluid around his spinal column set him back. “My hand kept going numb, and when I sneezed, it felt like my chest was going to blow apart,” he says. An MRI revealed a buildup of fluid on his spinal cord. “The doctor drilled a hole in my spinal cord to release the fluid. He said it was like sewing me up ‘under
a waterfall.’”

While the procedure corrected the fluid issue, Enns’ recovery has been grueling. “Several of the bones in my back are fused, and this surgery was so tricky, it’s considered another spinal-cord injury,” he says. Two years later, he’s still not fully recovered. “I’m pretty strong, but I’ve just now gotten to the point where every evening I’m trying to practice standing and doing some walking with a walker.”

Two years after his accident, Enns ran for and won a seat in the Oklahoma House of Representatives. There, he’s had a chance to champion a pair of causes dear to him: agriculture and empowering the disabled. At Oklahoma State University, he even helped establish an “agribility” program to assist farmers with disabilities.

That program has rendered assistance to farmers throughout the state, including Enns himself. “The agribility folks helped make the doors on my hay shed easier to open, so now I can do it from my scooter,” he says. “Simple things like that can be difficult or impossible for a person in a chair. But until someone pays attention to those needs, farmers struggle.”

At the Capitol, Enns also played a key role in establishing the Oklahoma Center for Adult Stem Cell Research, which is housed at OMRF. Working with the Oklahoma Tobacco Settlement Endowment Trust, he helped create a state center devoted to research using the undifferentiated cells that exist in all of us and that the body uses to replenish dying cells and regenerate damaged tissues.

“We fought hard to get OCASCR off the ground, just because of the words ‘stem cell.’ Every time I said it to someone, I had to clarify that we meant adult stem cells. It surprised me how many misconceptions there were about stem cells and how little people knew about their potential.”

Early-stage research had shown the potential for these cells to generate new therapies for a host of conditions ranging from Parkinson’s disease to blindness. Work had also shown exciting possibilities for the treatment of spinal-cord injuries like the one Enns suffered.

Since its formation in 2010, OCASCR has awarded almost 100 grants totaling more than $8 million to researchers at institutions across the state. Those funds have already helped scientists make new findings in leukemia, colon cancer, lupus, diabetes and eye diseases. Enns hopes work in Oklahoma will also one day offer new ways to help those with spinal-cord injuries.

“Representative Enns and TSET really had tremendous vision,” says Dr. Paul Kincade, who serves as both OCASCR’s scientific director and vice president of research at OMRF. “Six years ago, there were only two researchers in Oklahoma doing adult stem cell research. Now we have more than 30.”

Enns’ legislative term is up next year. Will he run again? Probably, he says, but it’s hard with so much to do at home. “The farm”—which has been in his family for more than a century—“is always my first commitment.”

One by one, a small herd of cows gathers at the fence, snorting, tails flicking away flies. Enns takes a long look around as his wife, Charla, drops to the ground beside his scooter. She pats her husband’s leg. It’s the kind of small, affectionate gesture that speaks volumes about a couple.

“Trauma either pulls you closer or tears you apart,” he says. “For us, it made us closer.”