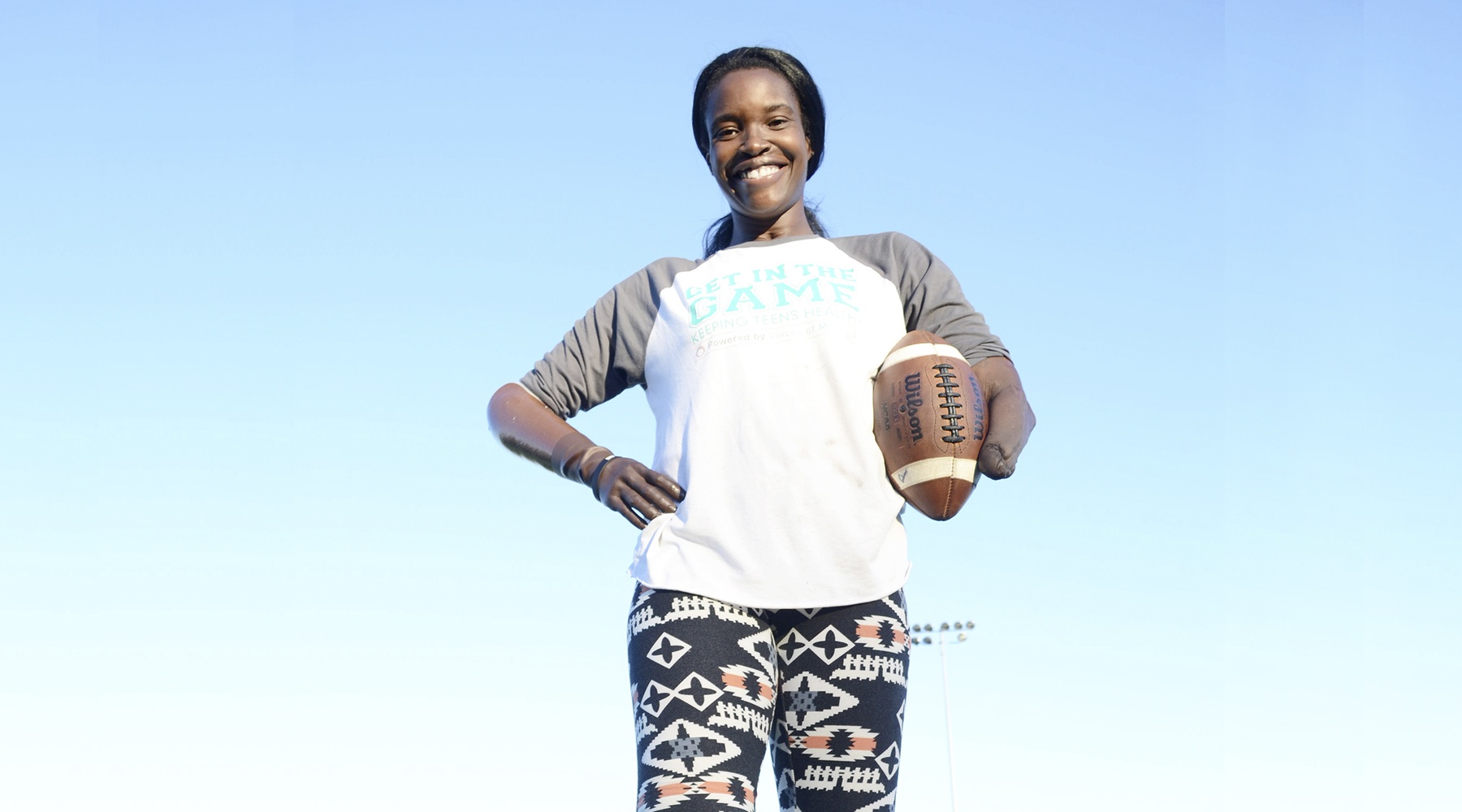 Only a month after she’d finished her freshman season as a member of  Virginia Tech University’s women’s basketball team, Rayna DuBose lay in a coma. Struck first by bacterial meningitis and then by the blood infection sepsis, her organs were shutting down. Plus, gangrene had set in, turning her extremities completely black.

When all else failed, doctors ordered a new medication called Xigris. Born at OMRF from the work of Drs. Charles Esmon and Fletcher Taylor, Xigris saved DuBose’s life. But it couldn’t save her limbs.

The prolonged loss of circulation to her extremities had caused the flesh in DuBose’s hands and feet to die. “Her tissues,” says Dr. Adam Katz, one of her physicians, “had literally mummified.” In the surgery that soon followed, doctors amputated all four of her limbs.

Marcus Lewis, DuBose’s high school basketball coach, visited her in the hospital. “After what happened to Rayna, she had every excuse to throw in the towel,” he says. “But she refused to accept that.”

She learned how to use prosthetic arms and hands that allow her to pinch, grip and release objects. Intensive physical therapy taught her to walk on prosthetic legs. She re-taught herself to drive and returned to Virginia Tech, where—resisting her parents’ advice to live in a handicap-accessible room—she moved into an off-campus apartment with a pair of teammates.

Four years later, she graduated from Virginia Tech and returned to her childhood home outside of Baltimore, Md. She found a house near her parents but spent most of her days traveling around the country as a motivational speaker. Eventually, she cut her travel schedule so she could join Lewis’ staff as an assistant basketball coach and take on work as a substitute teacher. This past year, she added duties as an assistant high school football coach.

Along the way, says Lewis, DuBose has become a role model for her teen charges. “She works out in the weight room just like all my other coaches. She does the drill work just like all the others. That rubs off on the players. They see that. It makes them better people. She’s an inspiration, and I will always have a place for her on my coaching staff.”

This summer, with no teaching or coaching duties, DuBose took to running 10 miles a day. Then she’d head out to a court to play a few hours of pickup basketball with local teens.

One day, as she ran down the court on her prosthetic blades, a kid screamed out, “Guard her!”

DuBose laughs as she recalls the scene. “They’d never seen anything like me!”

That positive attitude, says Lewis, is what makes DuBose so special. “When people see her the first time, it turns heads. But Rayna’s got her life in the correct perspective. She’s turned a very bad situation into a positive one. Not everyone could handle it the way she has.”

Even if she could, DuBose says she wouldn’t change a single chapter of her story. “Looking back, I love everything that happened to me then. It taught me a lot about myself.”

Besides coaching and teaching, DuBose still maintains a busy schedule as a motivational speaker and also spends time promoting the use of vaccines to prevent bacterial meningitis. Plus, she’s working on a documentary about her life. It starts with her first day in ballet class as a little girl and ends where she is now, showing student athletes that happy endings exist if they’re willing to work hard enough to find them. She hopes ESPN will one day air the story as part of the network’s “30 For 30” series.

She understands that ESPN is a long shot. But if anybody knows how to overcome tough odds, it’s DuBose.