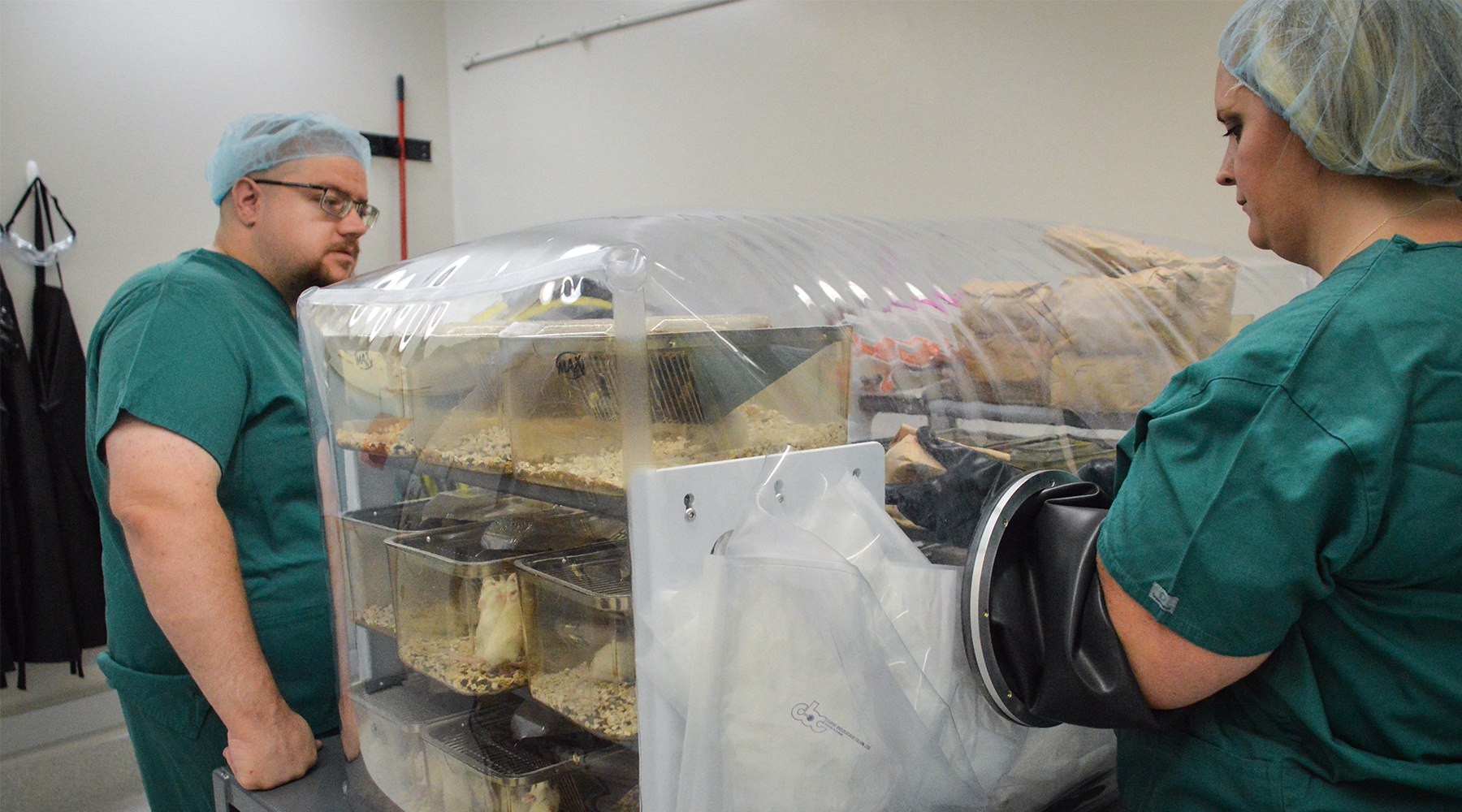 With OMRF’s new germ-free facility, researchers can study the role of microbes in human health

We are outnumbered. For every human cell in our bodies, 10 others belonging to microorganisms reside in our mouths, on our skin and in our digestive tracts.

To study the role these hordes of tiny hitchhikers—which we commonly think of as “germs”—play in our health, OMRF has opened a new research facility. Ironically enough, the new center is designed to ensure that it’s free from all of these germs.

The idea, says facility director Dr. Sai Tummala, is to start with a pristine setting in which laboratory mice are free of the trillions of microorganisms that ordinarily populate their bodies.

All mice that enter the facility are bred in a germ-free fashion. Once inside, they make their homes in flexible plastic bubbles called isolators that are ventilated with twice-filtered air. Food, water and bedding, plus any equipment or supplies, must go through a two-day sterilization process in a high-temperature autoclave. Likewise, personnel must don sterilized clothing and undergo an air shower before entering the facility.

“Then scientists can introduce a single microbe or group of microorganisms and see how they affect the mice,” says Tummala, who serves as OMRF’s associate vice president of comparative medicine. “By knowing precisely which microbes enter the environment, we can learn their specific role in disease.”

Already, research has shown that microorganisms may play a role in predisposing us to obesity and a range of chronic diseases. It has likewise suggested they may be responsible for a rise in allergies to nuts and other compounds. Evidence is also mounting that intestinal microbes exacerbate or perhaps even cause some of the symptoms of autism.

“We are entering a new frontier in research, and OMRF is in an excellent position to make contributions to the field,” says Tummala.

With funding from the Presbyterian Health Foundation, OMRF opened the center in the fall. Known officially as the Gnotobiotic Mouse Core Facility, it’s the only one of its kind in Oklahoma, and it’s available to researchers across the state.

Initially, OMRF researchers will use the facility to study the role that microorganisms play in the autoimmune disease Sjögren’s syndrome, where the body mistakenly uses its immune system to destroy moisture-producing glands in the mouth and eyes. Another is planning a project to examine whether gut microbes can affect the development of certain intestinal conditions. Meanwhile, researchers at the University of Oklahoma Health Sciences Center have also lined up projects at the center.

“It’s truly an exciting time for us,” says Tummala.