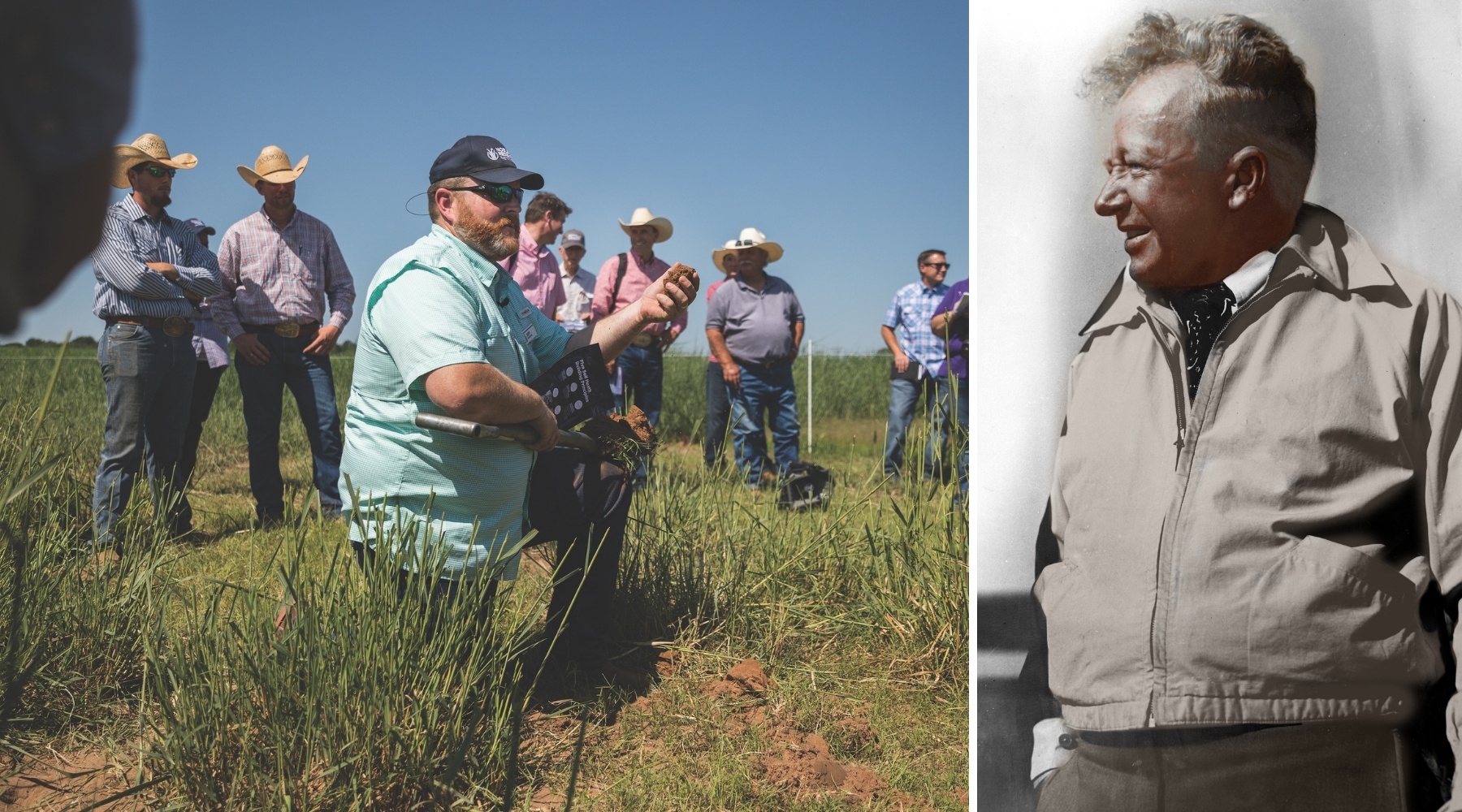 World War II had just ended, and the legendary oilman was returning from a business trip. From his Staggerwing Beechcraft, he gazed down on a windswept expanse that looked nothing like the rich southern Oklahoma lands he’d once known.

In the Ardmore of Noble’s birth, cotton had grown so abundantly that the city became one of the world’s largest inland cotton trading hubs. But by the 1940s, decades of over-farming and drought had robbed the fields of their agricultural wealth, leaving little more than dust and despair.

Noble had amassed a small fortune in drilling and production, so he decided to put some of that largesse toward healing the land. In September of 1945, he created a foundation and charged it with a mission of conserving and improving the land. He named it The Samuel Roberts Noble Foundation, “in honor of the most charitable man I ever knew, my father.”

Steve Rhines knows this origin story well. And he should. In March, he celebrated his 20th anniversary of joining the Ardmore-based foundation.

An attorney and native of Antlers, Oklahoma, Rhines remembers the factors that drew him to Ardmore from the Dallas office of one of the world’s 10 largest law firms. “I thought the Noble Foundation was a place where I could finish my career. And I thought it was an organization that cared about its people – and that its people cared about the mission.”

Cerebral and self-effacing, Rhines quickly rose from his initial role as technology transfer manager to become general counsel and, ultimately, in 2019, president. By that time, Rhines had helped split Noble into two entities: the foundation, and Noble Research Institute.

Earlier this year, the research institute announced it would devote all of its efforts to regenerative agriculture and, in particular, to regenerative ranching. The institute, said Rhines, will work toward a single goal: “regenerative land stewardship in grazing animal production with lasting producer profitability.”

That means land management that builds rather than depletes the soil. It means implementing those practices within the realm of raising cattle and other grazing animals. And, said Rhines, it means ensuring that farmers and ranchers can “make enough money to stay on the land and not cannibalize long-term thinking.”

The process of reorienting an institute with 360 employees and a $60 million annual operating budget is not trivial. But Noble has done it before: In the 1990s, it spun off its biomedical research division, sending it to the Oklahoma Medical Research Foundation.

Still, Rhines doesn’t see the current transition as a pivot. Rather, it’s about focusing and doubling down on Lloyd Noble’s original vision. “He wanted us to take care of the land, to leave it better than we found, and to work alongside individual producers, who he said were the greatest change agents within the nation.”

Noble is in the midst of a yearlong commemoration of the 75th anniversary of its founding. By the time it turns 100, Rhines hopes that “regenerative ranching would be seen as the norm, not the anomaly.” He also hopes that by 2045, “farmers and ranchers in all 50 states would know that if they came to the institute, they could get assistance in adopting or sustaining their regenerative practice.”

In total, Rhines said, there are 655 million acres of grazeable lands in the US. “That’s the single largest land use in the country, and almost all of it is unmanaged.” Just imagine, he said, “what happens if you begin to manage these lands.”

To that end, Rhines and his team are mapping out a plan to expand the reach of Noble’s work beyond Oklahoma and north Texas. The first step will be to forge partnerships with universities and other like-minded organizations from Texas to the Dakotas. “Forty-seven percent of all beef cattle are grown within this region. So, that can have a substantial impact.”

Rhines is quick to credit his predecessors – Mike Cawley and Bill Buckner – for their mentorship, and the Noble Foundation’s board for its leadership and support. He knows the path ahead is challenging, but he’s in it for the long haul. “This place has become a part of me,” he said.

As he charts the future of Noble Research Institute, Rhines is careful to study the blueprint drawn three-quarters of a century ago. “I believe we’re completely in lockstep with what Lloyd Noble would have wanted. We’re harmonizing where we should be in 2021 with what he laid out in 1945.”