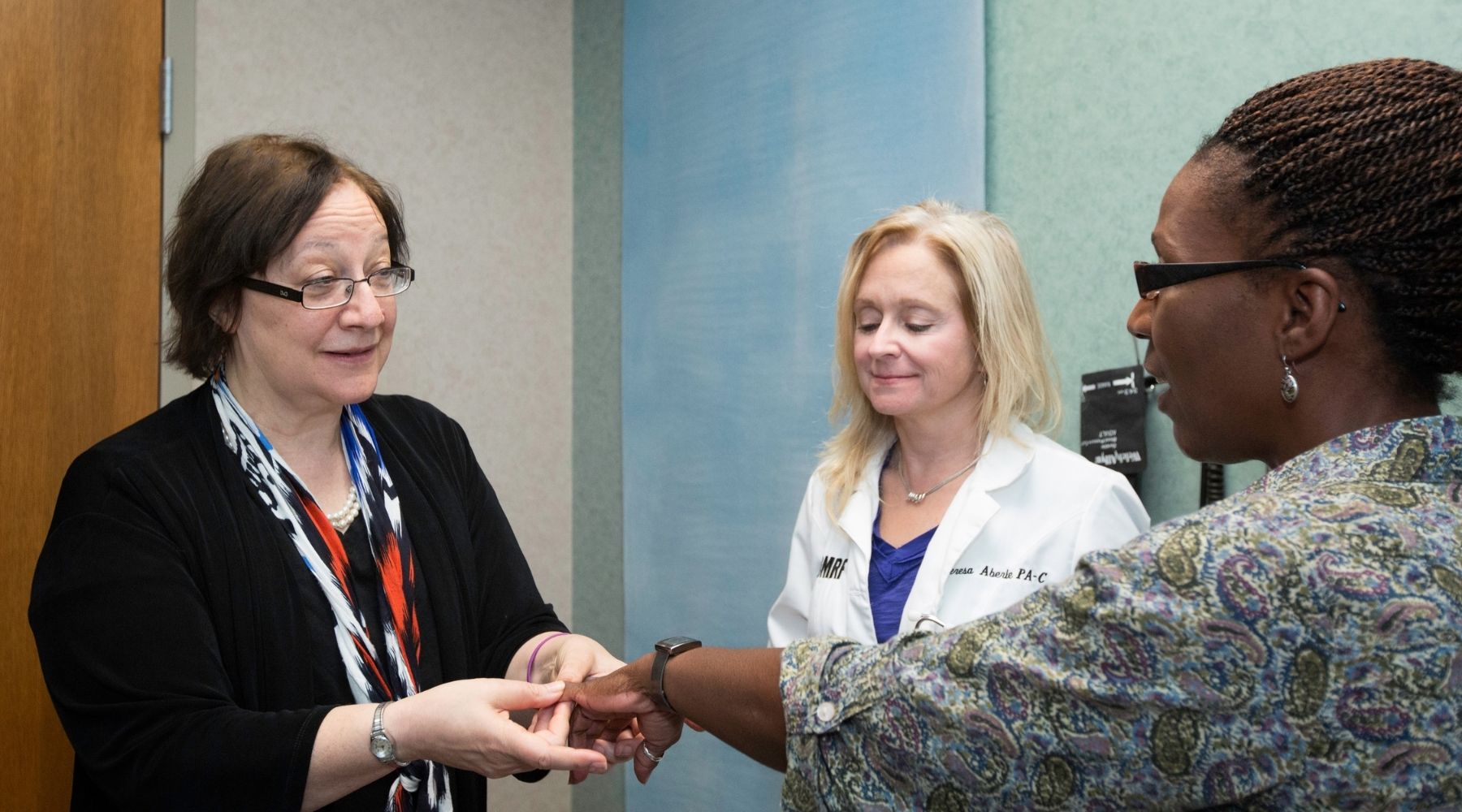 A clinical trial of a new treatment for lupus may offer hope to patients worldwide.

The highest dose of the investigational drug iberdomide showed a reduction of lupus symptoms by the end of a 24-week, Phase 2 study. Some of the data, if confirmed, suggests the possibility that a specific subset of patients with this complicated disease might be more likely to respond to treatment. The results were published March 17 in the New England Journal of Medicine.

OMRF physician-scientist Joan Merrill, M.D., was the lead author of the paper. She said the study illustrates the incremental advances that will be key to solving this perplexing autoimmune disease.

“Safe and effective treatments for lupus have been thwarted for decades due to the spectrum of immune disorders that are found in these patients and the fact that any given drug, no matter how sophisticated, is unlikely to work for all,” said Merrill, who also serves as the Lupus Foundation of America’s chief advisor for clinical development. “Testing treatments for all patients with lupus, analyzed together regardless of their diversity, has limited impact.”

Lupus affects an estimated 1.5 million Americans, primarily striking women and disproportionately affecting African Americans, American Indians and Latinos. Diagnosis is difficult because signs and symptoms vary considerably from person to person and can change over time. Major organs such as the kidney, heart and lungs can be impaired over time, and the disease can be life-threatening.

As a result, patients often take an array of medications, including anti-inflammatory drugs, steroids and immunosuppressants. Merrill said the Phase 2 study encourages her that someday blood tests will provide greater confidence in whether a person with lupus will benefit from a specific treatment.

“Right now, if we prescribe a drug for a person with lupus, there might be a 40% chance that it will work,” she said. “We need to increase that figure.”

Ongoing work at OMRF led by Vice President of Clinical Affairs Judith James, M.D., Ph.D., and Joel Guthridge, Ph.D., has helped to set the stage for precision medicine in lupus. Through blood testing, the researchers hope to one day define subgroups of lupus patients that may be suitable for better treatment selection.

“That would be a major advancement, because as difficult as lupus is to diagnose, it is even more challenging to identify the most effective treatment plan for an individual,” said Merrill.

OMRF served as a trial site in an earlier pilot study for the investigational drug. The Phase 2 trial involved 117 clinics on four continents and 288 patients with moderate to severe lupus.

Merrill noted that one of the most formidable barriers to developing new treatments for lupus has been how to get consistent analysis of disease activity among patients whose various symptoms are being evaluated by different investigators worldwide.

“For this trial, we implemented a level of training and data monitoring that would support meaningful results,” said Merrill. “That’s critical in making progress for these oftentimes very ill, very complicated patients.”

Merrill said a larger study is now needed to confirm the drug’s efficacy and safety.