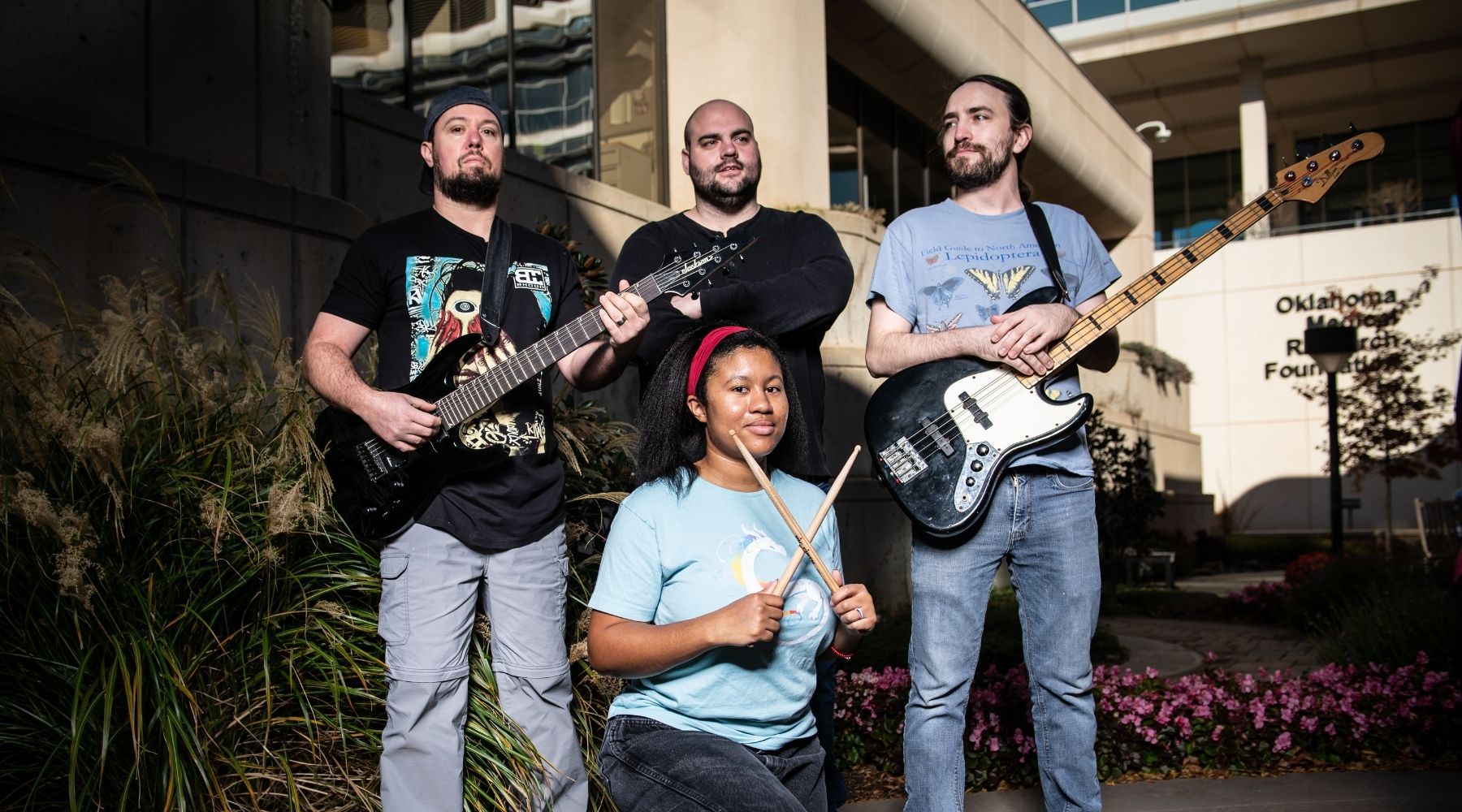 After months of joking about their shared musical interests, OMRF scientists Jakub Bunk, Jacob Brown, Ph.D., and Joe Woodward decided to get serious about their extracurricular jam sessions. The group needed to turn up the sound with a drummer. The only problem? They couldn’t find one.

Enter Taylor Conner. A research technician, Conner had a musical resume. But it didn’t include percussion. She played the flute. In marching band.

“I didn’t think they were serious when they first asked me to play drums, but I figured I could try,” Conner said. “Turns out, I had a hidden talent.”

With the band assembled and a name selected – Potoo, after a South American bird known for its large eyes and haunting, high-pitched call – weekly rehearsals and song-writing sessions picked up momentum. “Everything stopped for months because of Covid,” said Brown, “but we finally got to play a couple of shows over the summer.”

Woodward calls the band’s music loud, fast and “pretty hardcore.” When other OMRF scientists come to see them, “it can be kind of shocking.”

Tim Griffin, Ph.D., who has led a lab in OMRF’s Aging and Metabolism Research Program since 2008, found himself in one of those audiences over the summer. He encourages his team members — who include percussionist Conner — to find hobbies and share them with others.

“In a lab environment, you have to depend on coworkers, which requires a lot of trust,” said Griffin. “We have a network within the lab where people are invested in each other as individuals, not just for scientific contributions.”

Though science and the stage might seem far apart at first glance, the researchers don’t see their performance life as so different from that of the lab.

“In science and music, you’re problem-solving. You’re always tweaking something to make it just right; we just happen to do that with guitars and drumbeats,” Woodward said.

After the group’s first two shows, founding band member Bunk began his Ph.D. program in Canada, so the band took a brief hiatus to reorganize.

“I was just playing guitar with no real goal,” said Pierce. “Now the band is really stretching my comfort zone, and I’ve already gotten so much better.”

The members don’t have any dreams of hanging up their lab coats for the studio, but they’re looking forward to more shows.

“It’s been cool to see us go from hanging out at work to now making all this noise together,” said Woodward. “We’ll get back on stage soon.”

Tune In: Stream Potoo’s debut album, “The First and the Last,” on Apple Music, Bandcamp and Spotify.